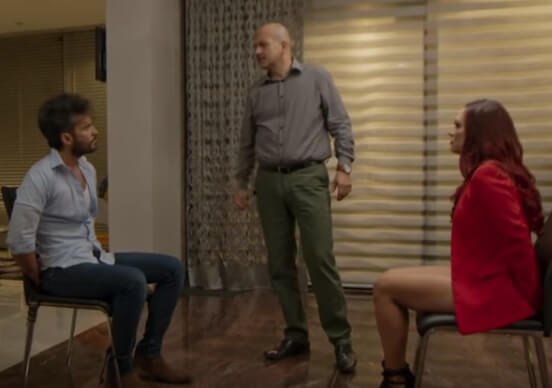 Albeiro meets with Diabla as planned, but it’s not what he was expecting at all. First, Esteban Calvo (Manuel Gómez) has a big black mask over him that covers down to his nose and he’s tied up in a chair. Second, Diabla isn’t the only one he’s meeting today. After chatting with him as herself a moment, Diabla puts on a jacket, gets Calvo to help make it appear she’s tied up as well, then speaks to him, without his mask on, as “Agent Valeria”.

“Valeria” claims that Diabla forced her to infiltrate the DEA and pass along info in exchange for the cure for her non-existent brother’s HIV. She swears she only did it to help her brother, and means no actual harm against her “friend” Catalina. She promises to help get him out of here, because they need to do whatever they can to save Catalina. “Valeria” overheard Diabla saying she wants Catalina dead.

Later, he’s got the mask on again when Diabla talks to him as herself. She says this is his home now, and they’re going to be a family. If he disobeys, he won’t get the HIV cure, and she might just kill little Albeiro. There’s one other thing, too—he’s supposed to kill Cata Grande if he wants to live.

Meanwhile, Doña Hilda Santana (Catherine Siachoque) is at her Fashion Week event stressing over the fact Cata 2 is nowhere to be found. Cata Grande has just arrived to speak to her mother when Johana (Bárbara Najas) sees her. She leads her to Doña Hilda, who tells Cata Grande about her missing sister. Cata Grande encourages her mother not to cancel her show and promises to find her sister.

Doña Hilda does just that. She’s walking down the runway at the end of her presentation when she sees Cata Grande in the audience. Cata Grande shakes her head and mouths that she hasn’t found Cata 2 yet. This causes Doña Hilda to pass out in front of everyone. Hmm. Wonder if she’ll need massive brain surgery for a minor fall again, like after she learned Cata Grande was alive. If so, hopefully she’ll lose her memory again. She was a lot more entertaining that way…

Obviously, as soon as Cata Grande learns her sister is missing, she jumps into action. She asks Johana where the security cameras are, as well as asking her and Mirta Muriel (Gloria Pinilla) to help search the place. Johana says she doesn’t know where the security cameras are, and instead of heading off in search of Cata 2, she seeks out Mateo Matiz (Steven Salcedo) and goes on about how “the oldest prostitute” was actually giving her orders like she’s on some DEA mission with her fellow sluts. Wow. Anyway, the whole thing is so distressing to her, she’s actually having a crisis of self-esteem and needs a drink.

Earlier, by the way, Mateo had informed her of the fact two of Cata Grande’s former co-prepagos are also working for the DEA, which has caused him to add to the story a bit. It’ll be ready to go live very shortly.

Vanessa, desperate to save Jota, calls on an old ally of the group, Daniel Cerón Venegas (Juan Pablo Llano). He’s a journalist who seeks to right injustices that the group met in season 1 (when it was called Sin Senos Sí Hay Paraíso) after Cata 2 and some of the others were unfairly imprisoned and Cata 2 was nearly killed by getting stuffed in a washing machine. Yes, it was as insane as it sounds.

Anyway, Vanessa thinks that his skills are just what she needs. She meets with him and they discuss the situation. He thinks she should be able to do whatever is needed with her DEA resources, but she says she’s lost right now and needs him. He agrees to help, but does bring up the possibility that Jota actually killed Laura Jaramillo (). They were, after all, in danger because of her. Not to mention all the other situations they’ve had to try and survive over the years. He thinks that if Jota was in a kill-or-be-killed situation, that it’s possible. Vanessa is still convinced of his innocence.

While they talk, Jota gives him a call. He’d told Sombra (Mauricio Cujar) and the others about the journalist who rights injustice and might be able to do something for them. After briefly speaking with Vanessa, he gets Daniel to say he’ll help. Sombra is going to send someone to pick Daniel up and bring him to them.

Finally we get a couple of scenes with Alfonso Berrio (Leonardo Acosta) and Mano Negra () that discuss the meeting and how Cata Grande has confirmed she’ll be there. Mano Negra is planning to blow the place up with her inside as well.

As for Berrio, he’s remembering his meeting with Mano Negra’s former helper, Santiago’s ex. Apparently,  their encounter left him hurt and lonely.

For the other candidate’s (Roberto Conde, played by Alejandro Martínez) part, he’s had bugs installed that are going to record every conversation with Mano Negra. His assistant doesn’t believe this is a wise move, but he doesn’t seem to care.