Catalina confronts Sandra (Alejandra Monsalve), who swears she didn’t realize what would happen when she posted that picture. She thinks that Cata 2 should go back home and do whatever she can to win Hernán “Nachi” Darío Bayona (Juan Pablo Urrego) over. Cata 2 refuses, as she’s got too much going on with her family right now. Plus, she’s getting just a little annoyed with the suspicions and considering making a change if it keeps up. We still can’t with her “I never failed him” routine. Nachi’s honestly too good for her and should’ve run the other way a long time ago.

After that, Cata 2 returns to Doña Hilda Santana’s (Catherine Siachoque) in time to see Doña Hilda throwing a fit over her failed meeting. She informs Mirta and Lizeth Muriel (Gloria Pinilla and Margarita Torres) that there will be no fashion week, which prompts Cata 2 to pull her aside for a private chat. Eventually, Cata 2 confesses to Doña Hilda what’s going on with Nachi and assures her mom that she’s very talented and worthy of that show.

Esteban Calvo (Manuel Gómez) meets with Albeiro Marín (Fabián Ríos) today to facilitate a visit with the kid. Little Albeiro runs at him and Big Albeiro seems completely in love with the kid right off. Calvo eventually breaks up the fun day they’re having to get down to business. Of course, he makes sure to get some snide remarks in about Albeiro’s condition and whether or not he has any open sores that could be dangerous. He’s so shameless with it, we can’t believe Albeiro is buying into any of this.

Anyway, he has the kid brought back to the car while he makes sure that Albeiro knows there will be six tasks he’s got to do in order to get that cure and see his kid. The first, of course, is making sure Doña Hilda is eating out of the palm of his hand. Right. Good luck, Albeiro…

Meanwhile, Catalina Santana (Carmen Villalobos) is still in Vegas and waiting for word on Mariana Sanín Santana (Stephania Duque) and “Agent Valeria” (Yésica “La Diabla” Beltrán, played by Kimberly Reyes). Diabla’s out cold, apparently having been legit hurt when that car stopped. They don’t know how long it will take her to wake, but a doctor does note she’s got a lot of scars on her face. Cata Grande’s never noticed that, but she agrees that it would make sense, given their work. Nevermind that things like that would likely be documented and Cata Grande, being the boss, should be well aware of what injuries “Agent Valeria” has suffered on the job. 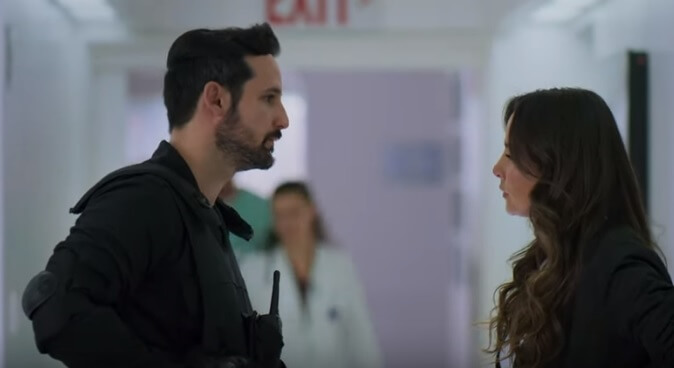 While they talk, Agent Michael Rubens (Giancarlo de Sousa) approaches and tells Cata Grande that policy dictates she should be taking a leave of absence at this point. The mission has gotten too personal, especially now. Mariana is a mess at the moment. Cata Grande takes offense to this, but eventually calms down when he explains it’s standard policy and they look at her as a very valuable agent.

Eventually, Cata Grande enters her daughter’s hospital room and is happy to see that, while she’s been medicated, she’s not restrained. It still pains her to see Mariana like this, and to know she’s tested positive for some serious substances.

While she is talking to a supposedly out of it Mariana, Mariana suddenly attacks Cata Grande. For reasons we don’t understand, the doctor rushed off for help instead of helping Cata Grande put the restraints on. And considering it didn’t like they were in a proper room (more of an ER-type thing), it’s not like he should have had to run far. While he’s gone, Mariana has gotten hold of a weapon and is threatening to kill Cata Grande unless she agrees to work with her. Cata Grande tries to calm Mariana, but it does no good. Cata Grande’s forced to knock Mariana out and then ends up sneaking her out of the place. Wow. Seriously? A person in DEA custody in a place that didn’t look that private is snuck out just like that?

Meanwhile, Mano Negra (Juan Pablo Gamboa), Vinicius Novais (Jorge Goncalvez) and Ramón “Moncho” Montecarlo (Mauricio Mauad) are fighting over the failed mission. Neither one really trusts him, and Moncho argues that if his organization was in charge, Titi would be dead. Mano Negra, however, thinks they need to keep him around a while more. He’s been working very closely on the XY4 project and he’s a member of the Cartel de las Babies.

Elsewhere, El Titi is getting questioned by Demonia. She doesn’t believe his story and wants to know what really happened with Agent Santana. He maintains that the DEA surprised him and it wasn’t his fault. He says “the gringos” went to the moon and have things that make them look pathetic by comparison. It’s not that crazy they managed to crash the party. Demonia concedes his point, and they end up in bed again. After all, Mariana isn’t around, so he will have more time to spend with Demonia.

He has enough sense about him to ask if she’s going to stab him in the back, too, but not enough sense to realize that she’s a snake who’ll sell out anyone. His weakness for anything in a skirt is totally going to get him killed some day.

Jota has a lot of questions for Sombra (Mauricio Cuja), especially after he learns they’re planning that jailbreak. Gumball (Daniel Maldonado) and Arturo (Jason Lizarazo) can’t with his silly questions and give a hard dose of reality. He’s going to rot here if he doesn’t go with them and do something to find that DEA agent who could possibly exonerate him. With Santiago Sanín’s (Roberto Manrique) backing, Jota eventually agrees and asks when Sombra is planning to do this.

Candidate Roberto Conde (Alejandro Martínez) is a little nervous today after a phone call with Mano Negra. He stresses to his assistant, who’s apparently aware of Mano Negra and his connections, that sellout puppets are a dime a dozen in this country, and he’s worried he’s about to be replaced.

Nelly Bayana (Lina Nieto) is also worried about her own candidate. They’ve also learned about Conde being backed by a dangerous organization. She fears that Alfonso Berrio’s (Leonardo Acosta) life is in danger. A team is going to be working out a plan to keep him safe as he travels to that meeting on combating drug trafficking.