El Final del Paraíso spoilers for Friday, September 6th find Catalina Santana (Carmen Villalobos) out of patience, Doña Hilda Santana (Catherine Siachoque) making the interview rounds, and Yésica “La Diabla” Beltrán (Kimberly Reyes) close to getting rid of the lone threat to her cover. We also have the escape happen. If you missed it, let’s catch up with an El Final del Paraíso recap. 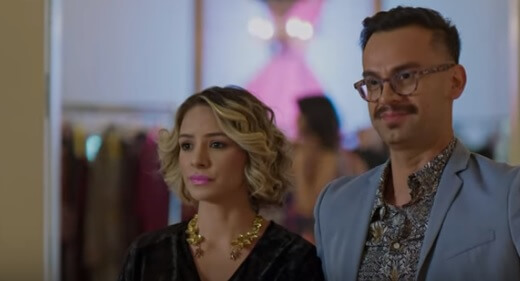 Hilda is still flying high from the success of her designs on the runway. They’re so popular, a bunch of journalists want to talk to this new sensation. Hilda does well with the press, giving thanks to Salvatore Miranda (Martín Karpan) for his support, as well as Catalina Marín Santana (Carolina Gaitán) and Albeiro Marín (Fabián Ríos). Reporters are eating her talk of female empowerment and chasing dreams regardless of age up.

In between interviews, Lizeth Muriel (Margarita Torres) and Doña Hilda get a chance to talk, going on about what a queen Cata 2 is (the press loves her even more than Hilda) and how they triumphed here because of the work they put in together. They’re looking at each other as family now.

Of course, Johana (Bárbara Najas) is not loving this. She can’t wait to bring about Doña Hilda’s downfall, with the help of Mateo Matiz’s (Steven Salcedo) bombshell report. Is it wrong she’s sort of amusing? As well as anticipating Doña Hilda’s squirming when the story comes out?

Cata Grande has had enough. Apparently, Natalia (Linda Baldrich) showed her the video she took of “Agent Valeria”, and she wants to know what Cata Grande thinks. She explains to Natalia that she talked to a doctor who said moments like that are normal for someone who went through a trauma like “Agent Valeria” experienced. When Natalia tries to argue and even mentions taking a fingerprint, Cata Grande shoots her down. She’s tired of this rivalry between the two, and she wants Natalia to get one thing through her head: they’re on the same team.

Diabla is listening to this conversation from inside her hospital room and is about as tired of Natalia as Cata Grande is of the rivalry thing.

She places a call to Mano Negra (Juan Pablo Gamboa) to assure him everything is going well. She believes Cata Grande trusts her and will continue to do so. The only threat to her cover at this point is Natalia, and she’s going to take care of that.

The prison doctor is freaking out today. He’d given the escapees the antidote to the poison after they were declared dead, but none of them are coming around. He stresses about how he’d warned them how risky this is, and begs for them wake up.

Meanwhile, Marcela Pinzón (Giovanna Andrade) was working on José “Jota” Luis Vargas’ (Francisco Bolívar) case with Gabriel (Ricardo Henao). It’s like the writers were shouting out the Twitter base when they have her giving an awesome WTF reaction to learning about the whole supernatural angle that was going on last season. She’s saying how complicated the case is when she gets a call about the incident at the jail. She and Gabriel rush there after informing Albeiro of what happened.

As for Albeiro, he’s devastated to learn this and also in denial it’s true. He rushes to the jail to try to learn more, but no one there is talking. It gets tense, with many family members outside wanting answers before Albeiro manages to get himself hit by one of the officials.

Later, the “bodies” are placed in a vehicle bound for the morgue and the doctor is brought along for the ride. He’s nervous, but it turns out he had nothing to worry about as far as his patients actually dying. During the drive, they all come around and escape the body bags. Jota and Santiago Sanín (Roberto Manrique) appear to be the only ones who don’t attack an official or use a weapon before they make a run for it.

Unfortunately (maybe) for them, they don’t tie the officials up before escaping the vehicle. Dragoneante Acevedo (Germán Rojas) and the others (with the exception of our doctor) run after them and the last thing we see is Jota suddenly stopping after a shot rings out.

Also today, Vanessa Salazar (Estefanía Gómez) pleads her case. She begs Carlos Jaramillo (Mauricio Mejía) to help get Jota out of jail. Carlos is sympathetic to her and her daughter’s situation, but he says there is nothing he can do because this is now in the hands of the law. Plus, he’ll never see his daughter again. The fact Vanessa thinks getting him to drop the charges or speak for Jota will help at all is confusing and weird. A better use of their time would be stepping up the search for Paola Pizarro (Alejandra Pinzón), who is the only one would could possibly exonerate Jota.