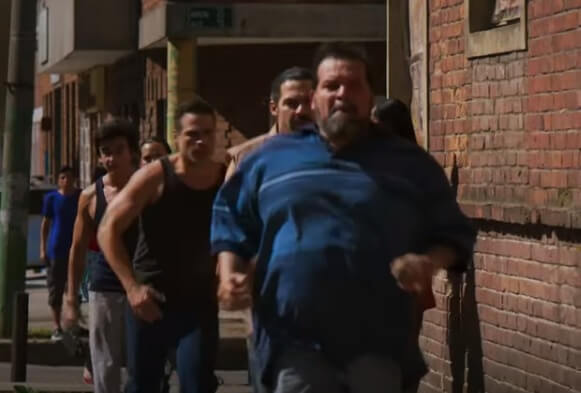 Today, we learn that Gumball was the one who got shot by the police following their escape. Shadow (Mauricio Cujar) is upset, but there’s no time to worry about that now. They have to keep running. They manage to get ahead of the cops enough to escape in a truck that was arranged to pick them up.

El Final del Paraíso spoilers: More than they bargained for

José “Jota” Luis Vargas (Francisco Bolívar) and Santiago Sanín (Roberto Manrique) are brought to a business that Shadow owns, where he promptly kills two of the men there. They were apparently snitches. Jota and Santiago are shocked and upset by this. After all, they’ve now been made accessories to murder, along with the escape thing.

After some not-so-veiled threats about the need for silence and staying put, the pair decides to ask Shadow more about his past. If he knows their whole story, Santiago thinks they should know his.

Turns out he was once working for Mano Negra (Juan Pablo Gamboa), who was using a different name at the time. Another employee had set Shadow up as a thief, which led to Mano Negra killing Shadow’s wife, then setting him up for the crime. We’re slightly disappointed. We were hoping this had something to do with one of the other original narcos.

Cata Grande, Natalia, and “Agent Valeria” are now back in Colombia. While Diabla is in the bathroom, the other two talk about the Jota situation with Vanessa Salazar (Estefanía Gómez). Cata Grande is surprised to learn that Jota escaped with her ex-husband, but they are unable to get any more information about the situation as of now.

Cata Grande ends up asking Natalia to look for “Agent Valeria” in case she passed out or something. Natalia is obviously not happy about that, but Cata Grande once more lectures her about them all being on the same team.

The plan will be for them to first try getting ahead of the Jota situation, but she believes “Valeria’s” idea to take a take a day off is a good one. First thing tomorrow, they will all meet to talk about taking down the new cartel.

Before returning home, Diabla calls Mano Negra to find out how everything is going with the “failure” XY4. Mano Negra assures her that Pilar (Margarita Reyes) is hard at work on the improvements and that this promise of a better product is what’s keeping Aurelio “El Titi” Jaramillo (Gregorio Pernía) alive. Diabla warns him that Titi knows nothing about loyalty and to be careful. She’s sure he’ll betray them.

Later, she has a little fun with Natalia. She pretends to have been sick from the plane ride, but Natalia makes it clear she doesn’t believe a word “Valeria” says.

Diabla apparently doesn’t appreciate this because she corners Natalia against a wall and goes on about how her only boss is Cata Grande. She actually comes on to her a bit, clearly trying to make Natalia uncomfortable. Natalia vows that she’s going to be keeping an eye on her. Dear lord, she’s stupid.

Calvo drops by the Santana home, where Albeiro has decided to wait in case there’s any news of Jota. Calvo admires how nice the place is now, and how beautiful “his lady’s” designs are.

There’s a purpose to this, besides rubbing in his attraction to Albeiro’s ex. He has someone who wants to speak to him. It’s Diabla.

Albeiro is shocked to hear from her, as they thought she might be dead. She says one of the devil’s best tricks is making one think he doesn’t exist. She immediately gets down to business, telling him that he is to meet her somewhere that night. That is, if he wants to see his son again and get the miracle HIV cure.

Titi and Mariana Sanín Santana (Stephania Duque) have an argument today about fidelity and respect. He’s been in the business 30 years, and he doesn’t think she’s giving him the proper respect. She’s basically just a kid. Mariana thinks that he’s just jealous that Mano Negra gave her a better position in his organization than Titi.

There’s that big anti-narco meeting coming up and both candidates are dealing with issues ahead of it.

Alfonso Berrio (Leonardo Acosta), of course, got that threat in a previous episode that has his staff all stressed out. He has apparently decided to go public with this, as he tells an interviewer there is something viewers need to know before he discusses his plan to deal with the drug trafficking scourge.

Over at Roberto Conde’s (Alejandro Martínez), his own assistant is shocked to hear that Conde is planning to find someone trustworthy in the DEA or another organization to tell all. He’s worried about how deep he’s gotten into this whole mess, and is worried about ending up dead or imprisoned if it’s discovered he’s on Mano Negra’s payroll. He’s advised to rethink that position, and there is no way he is going to give up on this race. She sounds awfully bossy, so we’re assuming she’s closely working with Mano Negra to make sure everything goes his way.

As for the attack being planned, Mariana is thrilled to learn her mother is going to be there as a decorated DEA agent. She’ll get blown to bits with everyone else. Mariana does, however, make it clear to Dayana “La Demonia” Muriel (Elianis Garrido) today that whatever else happens, not a hair is to be touched on Doña Hilda’s head. She’s the only one Mariana likes. Of course, she’d like her. They both have a taste for men that are with other women…

Finally, as Doña Hilda is working on another event, they can’t seem to find Albeiro or Cata 2. She’s worried about them, and Johana (Bárbara Najas) pretends to want to be helpful.

It turned out Albeiro was at the prison to get answers about Jota, which they all learn later. But Cata 2 is nowhere to be found. We’re sure that Johana had something to do with this.

‘Bold and the Beautiful’ Spoilers: Furious Bill Takes Justice Into His Own Hands, Finds Out About Ridge’s Shady Deal To Let Flo & Thomas Walk!