Doña Hilda makes her return to the runway today, as the first of several shows takes place. It seems Salvatore Miranda (Martín Karpan) managed to put together some extra models, as Catalina Marín Santana (Carolina Gaitán) is joined on the stage by several other women.

The show ends with Cata 2 modeling a wedding dress that Doña Hilda wants Cata 2 to be a reminder of the love she has for Hernán Darío Bayona (Juan Pablo Urrego). It goes so well that Salvatore informs Doña Hilda she’s been invited to another event the next day, and this time, there will be some buyers as well.

This seems to be all according to Johana’s (Bárbara Najas) plan to let Doña Hilda get a taste of success before she sics her buddy Mateo Matiz (Steven Salcedo) on her.

He’d informed Johana that she was right—Doña Hilda is stupid. He got her to sing like a canary, and he recorded it all for Johana’s listening pleasure. She thinks Doña Hilda’s big mouth is going to allow him to unleash a bombshell of a story. 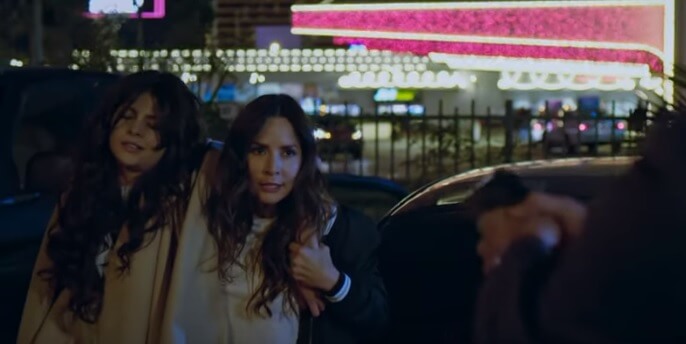 Meanwhile, Cata Grande is trying to figure out what to do. She knows from Aurelio “El Titi” Jaramillo’s (Gregorio Pernía) call that the narcos are on their way for her and Mariana. Unfortunately, she’s also realized the DEA is about to come at them as well. Cata Grande manages to get her and Mariana out of the room, but they’re found by Ramón “Moncho” Montecarlo (Mauricio Mauad). A brief confrontation later, and she’s managed to shoot him right in the eye, but Dayana “La Demonia” Muriel (Elianis Garrido) is nearby and knocks Cata Grande out. She and Mariana escape with Moncho while the getting is good.

After, Cata Grande is found by the DEA. For reasons we don’t quite get, Michael Rubens (Giancarlo de Sousa) changes his mind apparently on arresting her.

They’ve got Mariana back, so the group hurries back to Mano Negra (Juan Pablo Gamboa) to fill him in on what’s going on. He is not a happy camper when he learns that Cata Grande got away. He’s even more unhappy when he learns that one of his possible successors has been shot.

They call a doctor to come immediately, and Moncho is able to be saved. Unfortunately for Moncho, his eye is another story. It’s a goner, and the doctor who attends to him believes that Moncho should be in a special clinic for such injuries, but that’s obviously not an option.

The doctor soon regrets having been associated with Mano Negra. The guy knows too much. That means that the good doctor needs to be eliminated, which happens just when the doctor was about to leave.

Candidate Alfonso Berrio (Leonardo Acosta) continues to look toward his big meeting with other leaders regarding the fight against drug trafficking. This is not sitting well with Nelly Bayana (Lina Nieto), as there was a death threat left. Titi was responsible for that as part of his plan to take the guy out. Berrio is urged to take precautions but, oddly enough, he doesn’t really seem as worried.

Diabla has been working this scheme where she’s pretending to be unconscious this whole time. Today, she really puts it to good use. When she “wakes”, she pretends to have no memory of who she is, of most other things—just that she works with the DEA, got kidnapped by narcos, and knows Cata Grande. While a nurse thinks she’s sleeping off a sedative, she calls Mano Negra to say that Titi and the others coming for her didn’t fail. She purposefully hid from them for a reason. She wants to little-by-little “regain” her memory and keep being a trusted part of Cata Grande’s team. He likes that idea and is grateful that Diabla survived.

Later on, she works another angle. She tells Cata Grande that one of the things she remembers was overhearing some of the narcos talking—there’s a traitor on Cata Grande’s team.

Now that they’ve finally been freed from the punishment room, Sombra (Mauricio Cujar), Santiago Sanín (Roberto Manrique), José “Jota” Luis Vargas (Francisco Bolívar), and Arturo (Jason Lizarazo) are ready to act. Santiago instructs them in how to divide up the four bottles of solution between the five of them and they take the drug that will simulate their deaths. The whole group goes into convulsions and start foaming at the mouth before being rushed to the infirmary.

There, Dragoneante Acevedo (Germán Rojas) is informed that the men all died. Acevedo is clearly shook, and he’s in denial. Not tragedies like that happen under his watch, but the doctor assures him that this is the case. He’d better call the officials to take away the bodies.

Finally, we see a brief bit with Marcela Pinzón (Giovanna Andrade) today where she talks to Gabriel (Ricardo Henao) about the evening. She seems to be a bit taken with Albeiro Marín (Fabián Ríos), as she asks if he’s taken. Of course. Hmm. Wonder if all that time he spent with mama and daughter passed some of those Santana genes on to him. He’s pretty irresistible himself, being the focus of many women over the years.

‘Young and the Restless’ Spoilers: Here’s What Gina Tognoni (Ex-Phyllis Summers) Has Been Up To