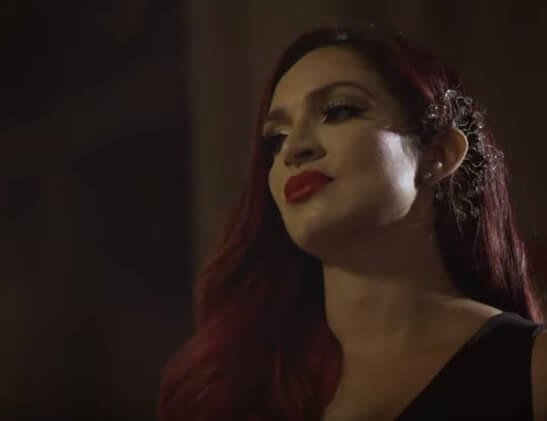 Santiago Sanín (Roberto Manrique) has come up with a risky plan to break out and get back his good name. With the drug Sombra’s (Mauricio Cujar) guy got last time, they’re planning to fake their deaths with the help of a doctor that’s on Sombra’s payroll. Santiago seems to be a bit nervous about the plan, but they’re all determined to go through with it. If it works, he’s promised he’ll be treated very well outside.

Poor Jotica’s situation just keeps sounding worse for him. As he sits in Oficial Mora’s (Héctor Manuel Cruz) office, he swears that he’s an innocent man. Mora counters that the evidence found puts him at the scene. Jota agrees he was there, but he didn’t kill Laura Jaramillo (Andrea Pita). He tried to save her from Paola. He’s sure she’ll back him up on this. He’d better hope so, because he was told he’s facing up to 40 years. Can we just talk a minute about why he’s not saying that Laura, you know, kidnapped them and tried to kill them? Why has self-defense not come up at all?

Carlos Jaramillo (Mauricio Mejía) drops by Dona Hilda Santana’s (Catherine Siachoque) place where she, Albeiro Marín (Fabián Ríos), Catalina Marín Santana (Cata 2, played by Carolina Gaitán), Lizeth Muriel (Margarita Torres) and Mirta Muriel (Gloria Pinilla) are all preparing for the big fashion show. They’re watching as Cata 2 struts around in one of Hilda’s designs as though she’s on the runway.

The fun is interrupted by Carlos informing them of Jota’s arrest. He swears he had no idea that Jose Luis Vargas was Jota, and that there was nothing he could do after. There’s physical evidence. Cata 2 and Albeiro rush to look for him and help in whatever way they can.

Seriously, though, Carlos needs to take a sit down and shut his mouth. He seems to forget that his daughter was a little she-demon who caused all kinds of trouble as a child, cursed his other daughter to prostitution and death, either cursed or did not help take off the curse that was on him, and, thanks to her curse on las chicas, was responsible for the deaths of three of chicas five daughters. Stop acting like she’s this poor, innocent flower. She also put a spell on Paola to make her to Laura’s bidding.

El Final del Paraíso spoilers: Who’s side is she on?

Speaking of Paola… it’s hard to know what to make of her. When Hai Meng (Aco Cajamarca) was told by a henchman she’s got a surprise for him and he steps onto the plane to find her in nothing but her under garments, it seems he is right to question this is a trap. However, it does seem like Paola might be willing to go to the dark side for her daughter, Martina (Joselyn Gallardo). She offers him whatever he wants, including information on Aurelio “El Titi” Jaramillo (Gregorio Pernía). She knows they don’t get along, and she wants him dead for what he did to her daughter. She had even told him that her being tied up in that hotel room bed reminding her of her old life and how much she actually liked it. Could one of the chicas be turning rat?

Speaking of Titi, he’s got a few problems. One, Mano Negra (Juan Pablo Gamboa) doesn’t trust him after Catalina Santana (Carmen Villalobos) lived through their escape. He’s for all intents and purposes out of their organization. But there’s more.

Mariana Sanín Santana (Stephania Duque) is just as distrustful and is angry that he didn’t kill Cata Grande when he had the chance. She thinks he wouldn’t hesitate to kill her if given the chance, and she reminds him that he’s basically at their orders. She also says he’s not quite the tough guy he thinks he is, because he’d be in a higher position in the drug world by now if that were true. Well, he was #2 at one point before he headed off to la carcel in the US. Give the guy a break. He had to rebuild, after all…

Another thing on Mano Negra and the Babe’s agenda is taking out the leaders they feel are a threat to their prosperity. Titi likes the idea of car bombs, but he’s likely going to be undermined with snipers instead. They think his idea is too risky.

One of the people on their agenda is Candidate Alfonso Berrio (Leonardo Acosta), who is going over his plans to fight drug trafficking with assistants Nelly Bayona (Lina Nieto) and Enrique Molina (Juan David Naranjo). Mano Negra calls Roberto Conde (Alejandro Martínez) and orders him to not give Berrio room to breathe tonight in the debate. He’s not facing an opponent; he’s facing a dead man walking.

Salvatore Miranda (Martín Karpan) has decided to put a little distance for now between he and Hilda, so he assigns someone named Joana (Bárbara Najas) to help with some all-important booth and other details. She and Hilda speak for a moment on the phone, then set up a meeting to work on the show, the booth, and all the details involved. This girl is already giving off massively shady vibes.

She proves she’s probably a snake when she calls a magazine reporter to tell him all about Dona Hilda’s shady past, including her daughter’s connection to prostitution and drug trafficking. She’s apparently into Salvatore and wants Hilda far away. Our reporter does some digging and finds Cata Grande’s picture. He is, obviously, immediately into her and starts drooling over the picture. Oh, good. For a second, we were scared that a man was immune to the genetic superpowers of the Santana family.

Finally, El Titi is put to work. He’s ordered to call Cata Grande and get the ball rolling on her destruction. Not trusting him, they demand that Titi put the call on speaker. Titi does as told and tells Cata Grande he is willing to hand over Mariana and “Agent Valeria”. He makes a big deal of how annoying Mariana is to him. He claims to be running things and says Mariana is out of control and he can’t take being around her anymore. As they chat, Cata Grande is busy making sure that her agents are on top of tracking the call. Before they hang up, Yésica “La Diabla” Beltrán (Kimberly Reyes) makes sure to call out that she hasn’t talked, and that she can’t take this anymore.

‘Young and the Restless’ Spoilers: Shey Redux – Sharon & Rey Back Together Again!