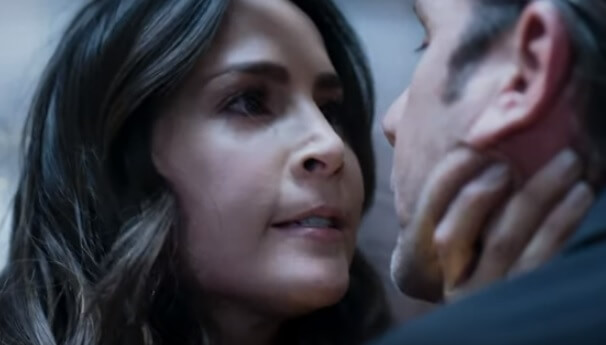 Jota is still haunted over the big confrontation with Laura Jaramillo (Andrea Pita) last season. They’re showing more of the incident that was kind of glossed over last season, and Jota is tortured by it. He keeps crying out how he didn’t mean to and other babbling that makes his nurse nervous. She and Jota’s doctor discuss this and the potential need to get the police involved, but he says it’s possible Jota is just delirious from whatever drugs are remaining in his system.

Later, he sees more of what happened and really starts acting loopy, which freaks the nurse out. But Jota is thrilled, because he’s seen that he’s actually not the one who killed la bruja. That was Paola Pizarro (Alejandra Pinzón). Of course, it was in self-defense, so no big thing there. Although we’re still wondering how she isn’t sitting in a jail somewhere after her murder of a nurse last season.

Cata 2 is outraged about Albeiro Marín (Fabián Ríos) showing up at the house. She wants nothing to do with him and is quite rude, still insisting on calling him “Brother-in-law” instead of “dad”. Ha! It is pretty screwed up and we’re just as disgusted, but we still can’t with her total absolution of Doña Hilda in this.

Cata 2 does, to her credit, her him out and, while he doesn’t tell her exactly what’s wrong, he admits it’s true. She believes him now and insists that he is going to be okay because he’s strong. They end up reconciling, but they only get a moment before something else happens to bring the drama.

Salvatore Miranda (Martín Karpan) is still around and Calvo ain’t having that. He ends up cutting off Salvatore’s car, then gets out and pulls a gun on him. He tells him he’d warned the guy to stay away from his woman, then breaks Salvatore’s window and pulls him out of the car.

Doña Hilda is witness to this whole thing, and she jumps into action. She puts herself in front of Salvatore to block any shot at him and demands that Calvo go away and leaves her alone. She’s not scared of him, and wants nothing to do with him. Calvo eventually leaves, but he’s not going to drop this. Doña Hilda turns her attention to Salvatore to check on him, and he admits that his injuries were not a car accident. It was Calvo.

Cata Grande is hiding right by the vents over the big narco meeting (wasn’t she warned about that?) when she’s suddenly got a gun to her head. It’s El Titi. He and Cata Grande go back and forth a lot about their old relationship and how the last time he saw her, he was proposing and going on about her being the love of his life. She doesn’t believe he’ll kill her.

They also fight about his having a child with her Mariana Sanín Santana (Stephania Duque) and how gross that is. She blames him for getting her daughter into this life, but he’s not taking the full blame here. Cata was also part of that life, so he argues it’s in Mariana’s blood. They’re getting sort of loud here and there, and doing a lot of struggling physically, so we’re wondering how this isn’t noticed. It will be soon, though.

Eventually, Yésica “La Diabla” Beltrán (Kimberly Reyes) is brought into the room by Mariana and Dayana “La Demonia” Muriel (Elianis Garrido). We were wondering where they were.

Anyway, La Diabla puts on a big show about having been captured and pretending like she doesn’t care what they do. She won’t talk. They bring her to where she can’t be seen, then make a big production out of yelling at “Agent Valeria” before quietly revealing to the other narcos that “Agent Valeria” is actually one of the Babes. They also reveal El Titi is distracting Cata Grande, who’s in the vent. Mano Negra (Juan Pablo Gamboa) isn’t pleased by El Titi being there, but all is eventually forgiven. El Titi even gets his place at the meeting after the other Babes assure everyone this whole thing was accounted for.

After all that is settled, they bring La Diabla back into sight and she again makes a big production out of how she won’t talk before screaming out for Cata Grande to get out while she can. Now that she’s been “accidently” outed as being in the vents, all the narcos (including the Babes) turn their guns to the ceiling and make a huge hole that Titi and Cata Grande fall through. He’s fine and, as we mentioned, given a place there, but Cata Grande is unconscious. They tie her to a chair along with Diabla, obviously to keep appearances up.

When she and Diabla are left alone, “Agent Valeria” apologizes for how wrong things went and feels bad about letting her down, as well as the whole situation with Mariana.

Cata Grande assures her that she knew the risks going into this mission. She’s happy that if she dies, it’s while doing something important. The only thing that upsets her about this is that it’s her own daughter who will be the killer. She worries about the karma Mariana will bring on herself for the act.

‘Days of Our Lives’ Spoilers: Is A Fan Favorite on His Way Out?