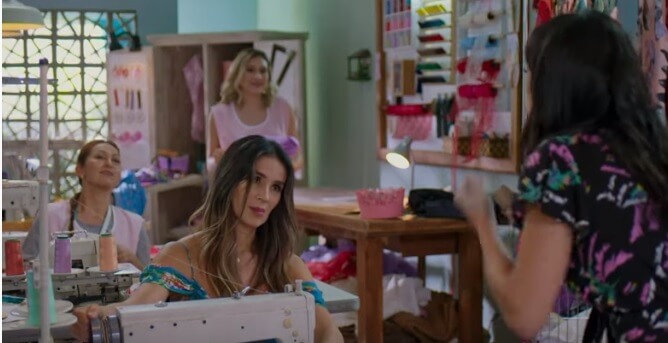 Doña Hilda Santana (Catherine Siachoque) is still plugging away at her big shot, thanks to encouragement by Catalina Marín Santana (Cata 2, played by Carolina Gaitán), as well as Mirta and Lizeth Muriel (Gloria Pinilla and Margarita Torres).

After she tells them everything that Johana (Bárbara Najas) said to her, Cata 2 insists that Doña Hilda prove the woman wrong. She wants her to come up with a dress so great to wear on the catwalk that Johana will eat her words. Doña Hilda shows Cata Grande comes by her stupid honestly by saying it doesn’t matter what she wears, it’s about the dresses Cata 2 will be modeling. First, who shows a collection at a Fashion Week runway show with one model? Two, Cata 2 has to remind her that the designer needs to step onto the runway as well after the collection is shown. It’s important that Doña Hilda look amazing, so they’re going to make sure her dress and look is incredible.

She might have some issues, though. It seems that little heart-to-heart with Salvatore Miranda (Martín Karpan) did no real good. Johana’s still plotting to screw over Doña Hilda with the help of her journalist friend. He is dying to get this story out about the Fashion Week discovery who has an ex-prostitute for a daughter and stole said daughter’s man. He’s most stuck on that last point, and it’s like the writers are giving the fanbase a shoutout. Johana isn’t quite ready for the story to leak yet, and her friend thinks this is a sign she’s backing out. She assures him that’s not the case. She just wants to wait for the perfect moment.

Esteban Calvo (Manuel Gómez) records another of his videos where he shows off little Albeiro. He goes on about how cute the kid is, as makes it clear that the little one calls him daddy. We can’t with this guy. Seriously. Especially with his main motivation being to win over Doña Hilda otra vez. She’s just not that into you. We are very amused, though, when Calvo claims he’s going to teach the kid how to defend himself as a father figure, instead of being a princess like Albeiro.

During the scene that follows the video recording, we learn a surprising fact. See, long-time fans already knew that little Albeiro is the product of a surrogate mother. Diabla had a woman implanted with Albeiro’s semen in order to get more of a hold on him. The surrogate was held captive and later managed to escape and got her sister-in-law’s help. She was later killed, and we thought the sister-in-law did as well.

The scene flashes back to when Diabla (previous actress Majida Issa) found the sister and supposedly had her killed. What she doesn’t know is, Calvo apparently left her alive. He’s got her locked up somewhere, where she’s been for the past two years without Diabla’s knowledge. Calvo will so be dead with Diabla finds this out. Given the look on Patricia’s face (the woman who’s helping take care of little Albeiro, played by Ivonne Gómez), she agrees.

Speaking of Diabla, she’s still unconscious in a hospital in Las Vegas. As a doctor and nurse attend to her (who are puzzled as to her state, because their tests have shown she’s not in a coma), we see what’s going on in Diabla’s head. It’s a kind of trippy sequence that was also pretty cool. In it, Diabla is confronted by a lot of the other characters, one by one. They laugh at her, insult her, tell her how she’ll pay for what she’s done to them, and that she deserves to be alone. Even Natalia is in on that action. However, the best part is saved for towards the end.

Diabla had a daughter (Daniela, played by Johanna fadul) who committed suicide last season after losing a beauty contest to Cata 2. Diabla sees her daughter’s back and tries to stop her, but she can’t catch up. She’s crying out for her daughter, which she also does in the real world.

In other news, Rubens still won’t pay a bit of attention to Natalia’s suspicions. He thinks that it’s impossible for a criminal to infiltrate them.

As for Cata Grande, she is still trying to save her own offspring. She tells Mariana she can insult her all she wants, it doesn’t matter. She is going to do everything possible to save her. She tells Mariana the only reason she’s in a cartel is having a child by Aurelio “El Titi” Jaramillo (Gregorio Pernía). All the drugs in her system have her thinking she’s bigger and badder than she really is, but she’s only a child playing at being someone important. Mariana obviously takes so well to this, but Cata Grande will keep trying.

Sombra is informed of a potential complication in their plan to escape. It seems the doctor he’s paying off is getting cold feet after Dragoneante Acevedo (Germán Rojas) got on his case a bit last time. He and another employee who’s in on this argue about the plot. The doctor says he can’t go through with this with Acevedo’s scrutiny and it’s probably best they don’t regardless. He ends up convincing the other employee of the same. In the background, one of Acevedo’s guys is listening in.

That’s what they wanted. It’s actually a big scam to through the guy off the track.
Meanwhile, the others are all still in isolation. José Luis Vargas (Jota, played by Francisco Bolívar) gets Sombra to speak about his past love. It seems she was killed by a narco who’d fallen in love with her.

Titi and Dayana “La Demonia” Muriel (Elianis Garrido) continue their supposed alliance today, but Titi’s questioning how much Dayana changed. She was into ladies before, and now she’s been with two men, including him. Dayana explains she likes both men and women. She claims people who aren’t picky eaters never starve. But she does have some concerns about him, as she remembers how he was when she brought Cata Grande to him as a call girl once. Cata Grande had been undercover to trap him. Anyway, she saw how he was eating out of the palm of her hands and even proposed to her once. He assures her there’s nothing to worry about, then they start going at it again. She believes Titi is going to be her downfall. We think Cata Grande will be his.

Later, Titi and Dayana meet with Mano Negra (Juan Pablo Gamboa), Ramón “Moncho” Montecarlo (Mauricio Mauad), and Vinicius Novais (Jorge Goncalvez). Mano Negra wants to know why Cata Grande isn’t dead yet, but Titi claims everything is under control. Moncho doesn’t agree and accuses Titi of being a slave to Cata Grande’s boobs. This leads to a fight between the two that has to be broken up. Dayana says that they need to focus on what’s important—making sure Cata Grande is toast.

Moncho has a good reason for his behavior, beside the obviousness of Titi’s conflicted feelings. Mano Negra seems to be thinking ahead to the day when he steps aside. His power is great, as is the organization he’s got, so he’ll need someone to keep things going. It looks like it’s going to be a bit of a competition between Moncho and Vinicius for who will be the successor.