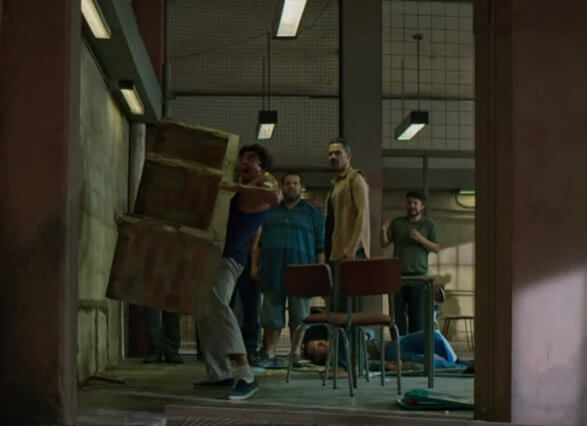 Jota is minding his business when a couple of guys approach him and start giving him hassle. They even throw some of Jota’s food on him, which Sombra is observing. He thinks Jota is a scrawny wimp that isn’t worthy of escaping with them, as Santiago Sanín (Roberto Manrique) wants.

He’s making fun of Jota when Jota suddenly hulks out and beats up the two guys messing with him. He even rips out what appears to be a cement bench fixed to the wall and throws the thing. Shadow says he wants Jota coming with them.

Of course, that might be tough, as Acevedo (Germán Rojas) comes along and tells Jota his behavior needs to be punished. Jota tries to beg innocence, as he has no control over the effects the drug is still having on him, nor does he clearly remember what he did. He just knows that the drug is still in his system and doctors believe something unique in his physiology stopped it from killing him. Sombra and the others stand up for Jota, but it’s no use. They’re all put in solitary.

Sandra (Alejandra Monsalve) ends up causing a huge issue between Cata 2 and Nachi, just as Cata 2 had called him to clear things up. She’d told Nachi that she is committed to him, and she will come right back into his arms and keep the promise they made of starting a new life in Bogotá. She just has to help Jota and her mother first.

Unfortunately, shortly after that call, Nachi saw a photo of Cata 2, Sandra, and Gabriel (Ricardo Henao) that Sandra posted online. He makes a snide comment on the post about Cata 2 moving on, which Cata 2 sees and freaks out about. She calls Nachi and goes on about how she loves him, and she’s never let him down. Looks like she’s not counting how she treated him like garbage after her niece (Mariana Sanín Santana, played by Stephania Duque) drugged and raped him, then accused him of being the rapist. This was despite knowing Mariana was a drug-using troublemaker, while Nachi had gone through all kinds of hell for Cata 2 and their relationship. But then, why should Cata 2 let facts get in the way of righteous indignation?

Anyway, Lizeth and Mirta Muriel (Margarita Torres and Gloria Pinilla) overhear Cata 2’s angry message and urge her to try making things right with him. Cata 2 decides that her first order of business will be confronting Sandra over posting that to begin with. Of course, Sandra denies having any idea Nachi would react that way. Right. This girl has been shady from day one.

Esteban Calvo (Manuel Gómez) calls Albeiro Marín (Fabián Ríos) and wants to meet. Albeiro rushes to do so, and wants to know where little Albeiro is. Calvo thinks he needs to learn patience and is stupid to believe that he would bring the kid with him.

As a show of good faith, though, Albeiro will be seeing the kid. He’s just going to have to stuff to do later.

Doña Hilda has a horrible first meeting with Johana (Bárbara Najas), Salvatore Miranda’s (Martín Karpan) assistant. She criticizes Doña Hilda’s clothes and goes on and on about how she is not looking glamorous enough for the fashion world. She, of course, does this in a “I’m just being helpful” way while being as insulting about it as possible.

Hilda later runs into Salvatore while leaving and says she will be going back to being the neighborhood seamstress, where she belongs. She’s not worthy of being in this world, and won’t hear Salvatore’s arguments to the contrary.

He goes to Johana later, who insists Hilda is not good enough for this and that Salvatore is being biased about her and her designs because of his personal feelings for his latest discovery. He says he believes in Doña Hilda’s designs and Johana ends up confessing her love for him.

Catalina Santana (Carmen Villalobos) argues with Vanessa Salazar (Estefanía Gómez) and Natalia (Linda Baldrich) about this exchange planned before ordering them to back off. She feels that, if something happens to her, maybe it’s payment for all the bad things she did when she was younger. Either way, she is going to do this to try saving her daughter and “Agent Valeria Montes” (Yésica “La Diabla” Beltrán, played by Kimberly Reyes).

What she doesn’t know is, Agent Michael Rubens (Giancarlo de Sousa) is on the case. He has obviously been keeping tags on her, and has a fellow agent plant a tracker on the car one of El Titi’s people puts her in. She’s driven to the spot, where El Titi is already waiting with “Agent Valeria” at gunpoint. When Catalina gets there and wants to know where her daughter is as well, he has another of the men pull Mariana out of the vehicle tied up and looking as though she’s being forced to be there. Everyone involved in the scam is playing their parts well. Maybe too well, because the DEA agents who are now hiding with weapons drawn believe Titi is about to kill “Agent Valeria”. They shoot and blow their cover, leading to an all-out fire fight. Titi pulls Cata Grande aside as everyone else is also hiding from the gunfire (or returning it) and accuses her of betraying him again. She swears she knew nothing about this and he gets her to admit he still has a place in her heart.

Satisfied, he allows her to take him “hostage” to get out of there.

Eventually, Cata Grande, “Valeria”, and Mariana escape in a van and are chased by El Titi and the others. Her tire gets shot out and when she gets out of the vehicle to face off, she swears she’d rather die than let them have “Valeria” and Mariana again.

Things were getting bad, and El Titi’s starting to look suspicious because he’s not allowing Rocco Candela (Juan David Galindo) to just take her out.

Luckily, the DEA is on their trail and manages to make the bad guys take off. In that time, “Valeria” and Mariana have gone unconscious, although it’s likely an act and will surely be attributed to the sudden stop that Cata Grande made when the tire was shot out.