Doña Hilda gets a visit from Johana (Bárbara Najas) today while working on her designs with Mirta and Lizeth Muriel (Margarita Torres and Gloria Pinilla). She’s surprised by the visit, where Johana goes on about Doña Hilda’s wonderful designs and how well-known she’s getting in the Colombian fashion world. There’s so much smoke getting blown up Hilda’s butt that it’s a wonder the house isn’t in need of evacuation. Doña Hilda is eating up every word, even as Johana is throwing some low-key shade about her humble workshop.

Lizeth is giving some awesome “bitch, please” looks through the whole thing, showing she doesn’t buy a word of Johana’s praises. After Johana leaves, Lizeth tells her there is poison in that girl’s eyes, and she doesn’t like this at all. She warns Doña Hilda to be very careful with her supposed helper.

As predicted by Lizeth, this was all a set up. Johana immediately calls her journalist friend Mateo Matiz (Steven Salcedo) and tells him that Doña Hilda ain’t that bright. She’ll be easy to get info out of, so long as he makes her believe she’s the next Colombian fashion mogul.

She’s right. Mateo appears later that night and practically forces his way into the house. He goes on and on about how she’s the talk of the fashion world and how honored he would be if Doña Hilda granted him an interview. He tells her that with all the buzz surrounding her and her designs, he wants to get the scoop on his peers. Doña Hilda falls for it and sings like a canary. Lizeth and Mirta are suspicious of him, but we all know she’s not going to take their warnings seriously.

Another character enters the picture today as Marcela Pinzón (Giovanna Andrade) is enlisted to help our protagonists. It seems the cops aren’t letting Vanessa Salazar (Estefanía Gómez) see Jota. Gabriel (Ricardo Henao) gets his boss on the phone and she immediately hurries to the jail to set things straight. It takes a bit of effort, but Marcela is a tough cookie and eventually gets her way. She is especially awesome when she calls them out for literally dragging Jota out of his hospital bed.

Everyone is grateful to her, including Albeiro Marín (Fabián Ríos), who approaches her to offer his thanks. For reasons we are not quite clear on, she starts telling him about how she had once had a serious illness and is now being her warrior self. There’s some vibes here, so it’s likely that she and Albeiro will bond at some point over that. Maybe she’ll get him to man up and just say what’s ailing him already. Or at least get another opinion.

Vanessa and Jota are now reunited and they discuss their separation and its effect on him. They’re getting along well, despite the conversation having also gotten to him locking her and their baby up to save her from Laura Jaramillo’s (Andrea Pita) curse.

As they talk, she asks him to tell her the truth. Did he really kill Laura? Jota refuses to say a word until Paola Pizarro (Alejandra Pinzón) is here to tell what happened. Seriously. What’s up with the men on this show not wanting to talk? Vanessa is frustrated by this and tells him that he’s just going to have to stay locked up then, because Paola is missing.

Titi is once again a source of tension, as Ramón “Moncho” Montecarlo (Mauricio Mauad) continues to doubt his loyalty. Titi is annoyed by someone else maybe going after Cata Grande, as that was his job. The decision has been made, though. They are going to work a new plan. 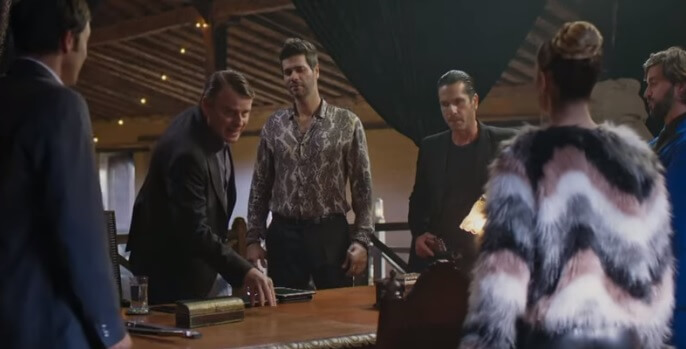 While Titi and a couple of others go to the hospital to rescue Yésica “La Diabla” Beltrán (Kimberly Reyes), Moncho and Dayana “La Demonia” Muriel (Elianis Garrido) will raid the location Cata Grande is hiding at to get back Mariana. They’re heading toward the hotel room as the episode ends.

At the same time, Titi is entering a hospital room, where it seems that Diabla has been faking her state somehow. She’d been left alone a little earlier and smiled once the door was closed.

Also doing dual operations is the DEA. Michael Rubens (Giancarlo de Sousa) is leading a team that will arrest Cata Grande and her daughter, while he orders Natalia (Linda Baldrich) to take a couple of agents to keep an eye on “Agent Valeria” as she recovers.

Titi is really looking for trouble, as he calls Cata Grande and warns her that Mano Negra (Juan Pablo Gamboa) knows where she is. He says they’re coming for her and the boss wants her head on a platter.

What he doesn’t know is, Moncho and Demonia are talking about him today and planning an alliance.