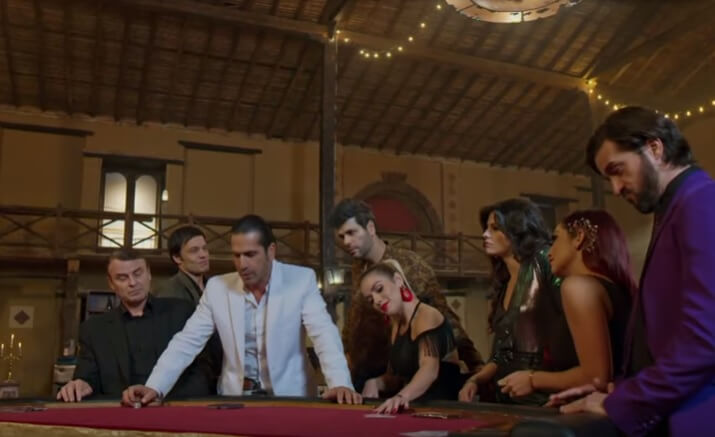 Jota has a slight break in luck today, as Albeiro arrives and promises to be there for him as they look for Paola Pizzaro (Alejandra Pinzón) and get this situation resolved. He’s also brought Catalina Marín Santana (Carolina Gaitán), who’s gotten her friend Sandra (Alejandra Monsalve) involved. With Sandra’s help, an attorney is on his way to help get Jota released. There’s just one problem.

The bad news is, that no one is able to locate Paola to back Jota’s innocence, because she’s currently MIA after getting abducted by Hai Meng (Aco Cajamarca). Given her seeming lust for revenge against Aurelio “El Titi” Jaramillo (Gregorio Pernía), we’re thinking she’s not worried about going back to her friends any time soon. Cata Grande is completely stressed out by all this and the effect it’s having on her other friend and fellow agent, Vanessa Salazar (Estefanía Gómez). Cata Grande says she’s going to do whatever she can to get her permission to return to Colombia.

Speaking of Cata Grande, she’s got an offer from El Titi to exchange herself for Mariana Sanín Santana (Stephania Duque) and “Agent Valeria” (Yésica “La Diabla” Beltrán, played by Kimberly Reyes). There’s a catch, though. She is supposed to come alone and go with Titi if they’re going to be released. She immediately agrees to the deal, which irritates Michael Rubens (Giancarlo de Sousa). He thinks she’s behaving more as a mother than a DEA agent. Cata Grande, of course, insists that she is a professional and demands to go alone as Titi specified. Vanessa doesn’t help this insane thinking any by telling Cata Grande she’s right and needs to leverage her power over Titi.

Now that the deal is set, Dayana “La Demonia” Muriel (Elianis Garrido) is in Mariana’s ear, questioning whether or not Titi is actually going to follow through on his duty. His clear feelings for Cata Grande sure give them every reason to doubt him. This, of course, gets Mariana going. Titi is hers, as far as she’s concerned. He’s the father of her daughter and she refuses to be in a mother/daughter triangle thing like Cata Grande and Doña Hilda.

Carlos visits Doña Hilda today, and they talk about the Jota situation. He is still torn on things, because he thinks whoever killed Laura Jaramillo (Andrea Pita) needs to pay—even if the killer is a “good guy”. Hilda goes off on him, saying that Jota may not be the smartest guy in the world, but he’s a good man incapable of killing anyone with a whole life ahead of him. She doesn’t think his daughter should grow up fatherless, like Cata Grande did. Way to get that low blow in, Hilda…

She also has had it with the “poor Laura” thing and says what a lot of fans are probably thinking right now. Laura wasn’t all that great a person, and she also did a lot of harm, especially to Carlos’ other daughter, Cata Grande. She begs him to drop the charges, and we’re reminded of a TV commercial. “That’s not how this works. That’s not how any of this works.” Seriously. There was DNA evidence in a homicide found. It’s basically out of Carlos’ hands at this point.

Calvo films a video today with Albeiro’s (and Diabla’s) son. Neither parent seems to be thinking too much about the little one. Anyway, he does a big pitch about how adorable the child is and how Albeiro is missing these crucial moments. He thinks Albeiro doesn’t want to see his own kid, and says he’s got a good mind to hurt little Albeiro after seeing daddy at Doña Hilda’s. He’s willing to be generous and do no harm (as well as start handing over the cure a little at a time) if Albeiro will convince Doña Hilda to give Calvo a chance.

Finally, there’s the debate between candidates Alfonso Berrio (Leonardo Acosta) and Roberto Conde (Alejandro Martínez). The event doesn’t go the way Mano Negra (Juan Pablo Gamboa) wants, as Conde completely fumbled. After, Mano Negra calls to scold his wayward candidate and says that if he loses another debate, Mano Negra will have to let him go. Conde asks if he’s threatening him, to which Mano Negro says he doesn’t make threats. He gives warnings.

‘Bold and the Beautiful’ Spoilers: Does Flo Deserve A Second Chance? (Poll)