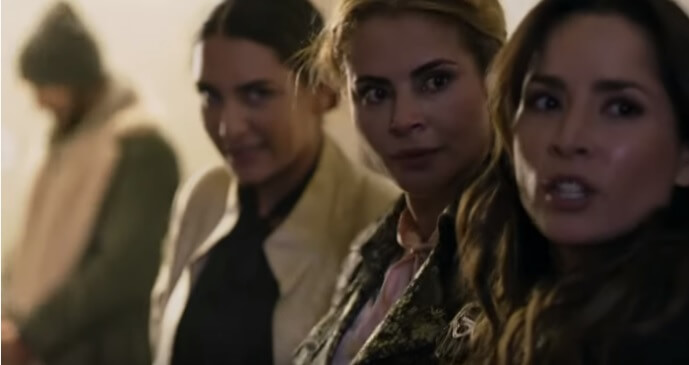 Poor Jota’s joy over his revelation he didn’t actual kill Laura Jaramillo (Andrea Pita) is short-lived. He and the nurse are happily chatting when several officials arrive at the hospital, accompanied by Carlos Jaramillo (Mauricio Mejía) and Oficial Mora (Héctor Manuel Cruz), a cop Jota ran afoul of last season.

Carlos was outraged earlier that the other person was identified as a DEA agent out of the country (Paola). He argues that it shouldn’t matter who she is, they need to serve justice. At the very least, he’s assured one can be brought in now.

Mora enters Jota’s room and places him under arrest for murder. He even goes so far as to drag Jota out of his hospital bed to bring him in, ripping off the monitors and IV. They don’t even bother to put anything on to cover the flimsy hospital gown, totally ignoring the nurse’s objections. We’re pretty sure this can’t be legal. It’s definitely shady, as we’d think that a guard would normally take charge of a patient until a doctor says they can be released.

Meanwhile, the heads of various cartels are still talking business, even as Catalina Santana (Carmen Villalobos) remains tied up alongside “Agent Valeria”. They want each one to chip in as partners in XY4, helping to fund some slight tweaks to the drug before it floods the market. In exchange, and assuming they have the influence needed, offer them the chance to profit off of X6, the miracle HIV drug. They just need to help infect people to create a huge demand. The drug lords agree to this, as well as taking out several heads of state that Mano Negra (Juan Pablo Gamboa) and the Babes deem a threat to their business.

Once things are settled and they’ve decided it’s time to take out Cata Grande, they surround her and say they’re about to kill her now. First, however, “Agent Valeria” has something she needs to say. Before Yésica “La Diabla” Beltrán can reveal who she really is, the other DEA agents attack the room. If she doesn’t have suspicions about her trusted agent now, she’s dumber than she was in Sin Senos No Hay Paraíso. Seriously. We don’t expect her to know it’s Diabla, but the way he said it should totally make her pay more attention to Natalia (Linda Baldrich).

The survivors, including Mano Negra, Mariana Sanín Santana (Stephania Duque), Aurelio “El Titi” Jaramillo (Gregorio Pernía), La Diabla, and Dayana “La Demonia” Muriel (Elianis Garrido) all escape to the roof where a helicopter is waiting. They’re displeased to see Cata Grande is still alive and has followed them. They end up nearly making Cata Grande do a swan dive off the building before flying away.

Cata Grande has about as many lives as Diabla (and the same luck). She survives the first attempt on her life tonight when El Titi can’t make himself shoot her.

She survives the second one by managing to get a hold on the roof. Agent Michael Rubens (Giancarlo de Sous) helps her pull herself back up after the narcos are already gone and celebrating her alleged demise.

Paola’s in a bad situation today, as she’s been taken hostage by Hai Meng (Aco Cajamarca), one of the narcos at that summit. He’d gotten a hold of her while the DEA had jumped in to save Cata Grande and “Agent Valeria”. He escapes the hotel without the rest of the narcos and says he’s going to use Paola as his ticket out of the country.

Meanwhile, the DEA has managed, with the help of security footage, to track Paola to a hotel room that is far less opulent than the place they were staying at. Unfortunately, by the time they arrive, he’s already made an escape with Paola.

Diabla’s had it with Cata Grande and her luck. She proposes an idea to the rest of the narcos after they learn their adversary is alive. She plans to have her get a message offering to send Mariana back to be a good little girl, as well as her trusted “Agent Valeria”. All she would need to do in return is offer herself up in exchange.

We think she’s got far worse plans for later. She’d called Esteban Calvo (Manuel Gómez) earlier to say that she wants Albeiro Marín (Fabián Ríos) to be the one to kill her, as well as anything else she tells Albeiro to do in exchange for the cure. We’re sure even a useless fool like him will say no to this, but hey—gotta give the girl points for trying.

Finally Santiago Sanin (Roberto Manrique) and Sombra (Mauricio Cujar) share their personal tales of woe that are making them take a drug that will simulate death so they can escape. Sombra’s guy on the outside secures the drug today and a doctor at the jail on his payroll as well will help pull off the scam.