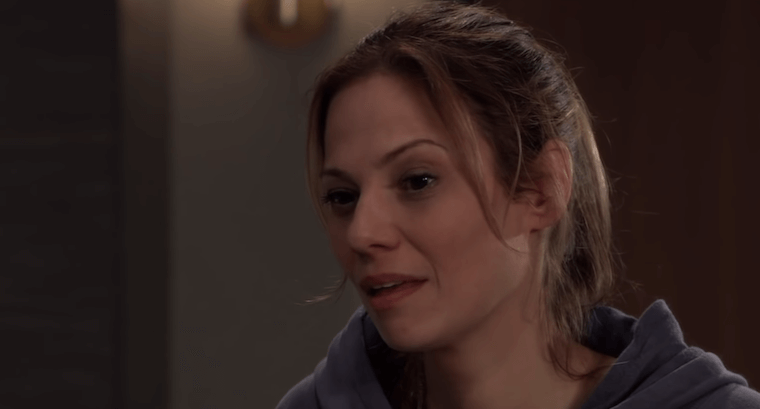 ‘General Hospital’ (GH) spoilers reveal a couple of possible farewells, a change in plan for Molly Lansing-Davis (Haley Pullos), more Alexis Davis (Nancy Lee Grahn) and Neil Byrne (Joe Flanigan) drama, and a last-minute save. If you missed it, let’s get to some highlights in today’s General Hospital recap.

Julian Jerome (William DeVry) is both shocked and hurt to learn Kim Nero (Tamara Braun) is planning to leave town. She tries to explain that it was a last-second decision and Drew Cain (Billy Miller) just happened to be there. He asks if she’ll really be able to heal as a stranger in a new place.

Kim counters that living in Port Charles is just making her pain over Oscar Nero (Garren Stitt) worse and she can’t possibly ask him to leave behind his family and business. He points out that people drink all over, and planes are great at facilitating visits. He just needs to know that Kim actually wants him with her. She does.

Kim isn’t the only one talking about change. TJ Ashford (Tajh Bellow) has decided to sit Molly down for a little talk about the future. He believes that she has never looked as fired up about law school as she did about that Dawn of Day piece. He points out there are lots of people who end up regretting a life of putting their passion aside to pay the bills.

He thinks she owes it to herself to at least explore the writing path for the summer instead of getting ahead in her law classes. Eventually, he talks her into approaching Peter August (Wes Ramsey), who is sitting at a table not far away.

‘General Hospital’ spoilers: Keeping up with the Cassadines

He and Maxie Jones (Kirsten Storms) are talking over the Lulu Falconeri (Emme Rylan) situation and the evil people are capable of when Molly interrupts to pitch herself as a writer.

While he doesn’t think anything on DoD is going to be useful right now, he eventually decides to give her an opportunity. He wants her to do a little digging and put together something about the Cassadine family. Molly is thrilled to get her foot in the door and takes off, but Maxie is confused as to why he wants something on that “creepy” family. He thinks there’s a potential story there readers will eat up, and if the piece is no good, he doesn’t have to run it.

‘General Hospital’ spoilers: Just get it over with

Alexis is once again upset by getting fired as a patient and (also once again) doesn’t like the idea of starting over with a new one. Neil is firm this time, saying that the line has been crossed way too far now for this situation to continue. Alexis isn’t giving up that easy. At least, in terms of having Neil as some part of her life. She likes him, and she feels he tells her like it is. She convinces him to come back inside, where she proposes the idea of getting to know each other better. He says they can’t before taking off.

Lucy Coe (Lynn Herring) is still trying to sell the former DoD house. This time, she’s got Sasha Gilmore (Sofia Mattsson) along for the tour. Sasha loves it, but thinks the place is far too large. Lucy counters that the owner is also considering turning the house into condos. Sasha loves the idea, but can’t wait that long for a place.

Plus, once she learns Michael Corinthos (Chad Duell) is the owner, she thinks it’s a bit of a conflict of interest. Undeterred, Lucy changes tactics. She loves real estate, but she’s been thinking of a change lately herself. She asks Sasha if she’s given any more thought to modeling, because she believes hers is the face that can relaunch Deception. Wow. Can we telegraph any more? She and Sasha walk off with Lucy giving a hard pitch for Deception.

Finally, there’s Shiloh’s (Coby Ryan McLaughlin) proposal to Jason Morgan (Steve Burton)—his memories for Sam McCall’s (Kelly Monaco) safety. As they talk, Jason spots a gold hand-shaped thing on the dresser and attacks Shiloh with it before racing out in search of Sam.

While he is searching the former DoD house for Sam, Drew and Curtis Ashford (Donnell Turner) have sounded the alarm. They’re convinced that Shiloh is going to use Jason to access Drew’s memories, thereby getting revenge for Jason and Sam destroying his life. Drew calls Sonny Corinthos (Maurice Bernard), who was chatting about Sasha with Michael. The pair searches around town with the help of Sonny’s people. Meanwhile, Curtis and Drew search the hotel, where they find signs of a struggle but no Shiloh.

Eventually Jason realizes Sam is trapped inside that container and has Lucy call for help, as well as inform Sonny and Michael. He manages to pry the thing open and get Sam breathing again.

Finally, Cameron Webber (William Lipton) is in a mess. Josslyn Jacks (Eden McCoy) out of the house, the two girls leave with promises of meeting him for a movie later. Cam is finishing up his work when he comes across Shiloh and recognizes him. The shot then goes to a bunch of trash and the thing Cam was using to pick up garbage obviously dropped on the ground.

‘Days of Our Lives’ Spoilers: Stefan’s Framing For Ted’s Brutal Murder, Will Gabi Save Him?