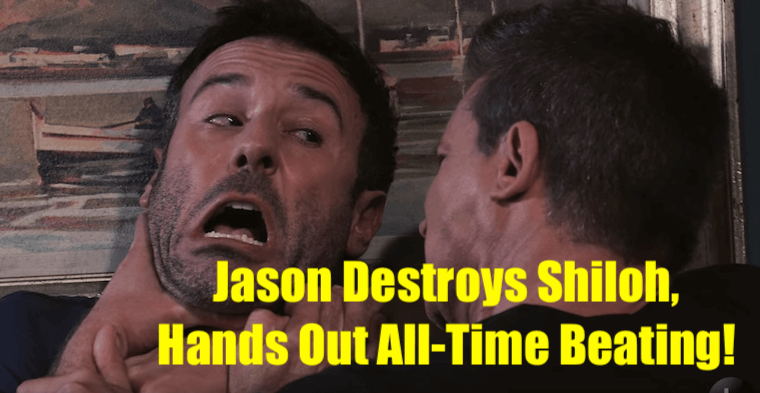 ‘General Hospital’ (GH) spoilers for Tuesday, August 6 indicate that Jason Morgan (Steve Burton) will continue his thorough and well-deserved beating of Shiloh Archer (Coby Ryan McLaughlin) for kidnapping Sam McCall (Kelly Monaco), while Jason knows that he has to cooperate or Sam will die, that doesn’t mean that he can’t make Shiloh suffer. Shiloh wants to try the memory mapping procedure on him, but as we all know, Jason isn’t a candidate for the procedure because of his previous brain damage. But he’ll still try other ways to cooperate with Shiloh so that the mother of his children will live.

Meanwhile, Drew Cain (Billy Miller) and Curtis Ashford (Donnel Turner) will have a chat about what Shiloh is planning and Drew, not realizing what has already went down will think that Shiloh’s planning something huge and will want to save Jason and Sam from anything involving him. Both Drew and Curtis realize that they may need bigger guns than just what they can bring to the table, so they’ll be contacting our local neighborhood mob boss, Sonny Corinthos. (Maurice Bernard.)

Meanwhile, Sonny will be having a heart-to-heart with son Michael Corinthos (Chad Duell), offering him some fatherly advice and God knows he needs it. He’s falling pretty hard for Sasha Gilmore (Sofia Mattson) but as we all know, Michael is always attracted to girls with things to hide and Sasha is no different. Sonny is looking out for his boy, and Michael will take his Dad’s advice like a man and actually listen to him about maybe pumping the brakes on this relationship before it goes south on him. After all, we wouldn’t want another Nelle Benson (Chloe Lanier) situation, would we?

Yesterday, after much deliberation, Dr. Kim Nero decided to leave Port Charles, at least for awhile. Today she’ll have the tough job of explaining this decision to boyfriend Julian Jerome (William deVry). This will come at a bad time for Julian because he was just about to buy the old Dawn of Day house and set it up for them. However her mind isn’t fully made up yet, she still has a meeting with Lucy Coe (Lynn Herring) next week so she’s not gone quite yet. We’ll just have to see what develops.

General Hospital Spoilers: Joss has a good day – for once!

It looks like Josslyn Jacks (Eden McCoy) will finally have some fun for a change! While hanging out with Cameron Webber (Wiliam Lipton) and Trina Robinson (Sydney Mikayla) she has a big idea that will lead to fun for all. But where’s Dev Cerci (Ashton Arbab) in all this? I guess he was too busy learning about the coffee business to show up, eh? It’s alright, we’ll probably see him soon enough.

Maxie Jones’ (Kirsten Storms) heart will break upon seeing bestie, Lulu Falconeri (Emme Rylan) go through her divorce from Dante Falconeri (Dominic Zamprogna) but she’ll realize that ultimately there is nothing she can do but let Lulu work through it on her own. She’ll talk about this latest development with Peter August (Wes Ramsey) and he’ll help her realize that sometimes you just have to sit back and let things go. (I’m sure the bullet hole in his arm will do wonders for this part of the conversation.)

General Hospital Spoilers: TJ and Molly have a chat and Alexis and Neil part ways

TJ Ashford (Tajh Bellow) will tell Molly Lansing (Holly Pullos) that there’s an interesting opportunity concerning her future. No word on what her reaction is yet, but it doesn’t seem to be negative to there’s that. Meanwhile, Alexis Davis (Nancy Lee Grahn) and Dr. Neil Byrne (Joe Flannigan) will realize that it’s time for them to part ways as doctor and patient – but neither want to stop seeing each other cold turkey, so perhaps things will finally take a romantic turn between these two? God knows Alexis has wanted it for so long. Stay tuned!!!

‘Days of Our Lives’ Spoilers Tuesday, August 6: Stefan Touches Tony’s Gun, Gets Caught With Murder Weapon – Goes To Jail For Murder One!