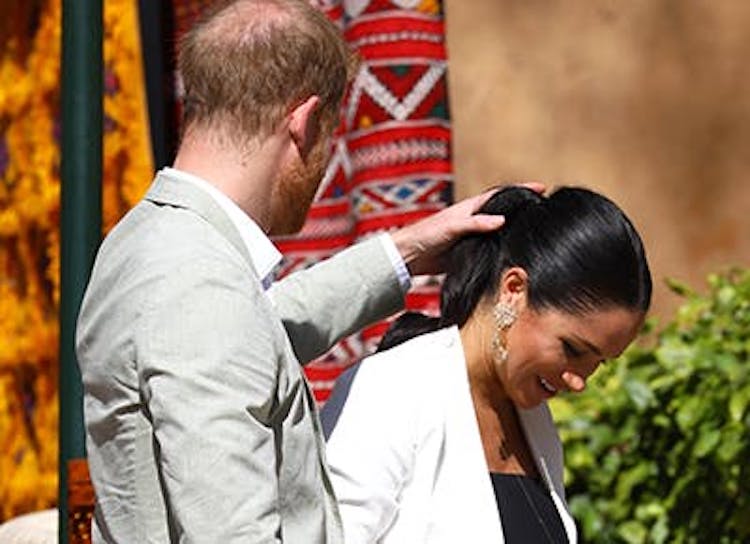 British Royal Family News find that apparently, Prince Harry is really taking his ‘Californication’ transformation very seriously as he not only taking surfing lessons, basking in the sun and eating In-N-Out on a regular basis, but he’s also rocking a ponytail. At least, that’s what his neighbor, actor Rob Lowe says.

While on The Late Late Show with James Cordon, Rob told the British host about an interaction he had with his neighbor, Prince Harry.

“I just ran into your countryman, the English treasure, Prince Harry, at the stoplight 10 minutes ago,” Lowe shared. “He lives about a mile from me. He’s been very reclusive. Seeing him in the neighborhood is like seeing the Loch Ness Monster, and I finally saw him. I finally saw him driving his car.”

Rob went on to say that is when he noticed the Duchess of Sussex looking a little bit different.

“I may have a scoop. It was very, very quick, don’t totally quote me on it, but it looked like he’s wearing a ponytail,” Lowe said. “I’m just saying. It looked to me as a casual observer that his hair had grown very long and was pulled back very tightly by what I can only assume was a ponytail.”

However, it doesn’t seem as though James Cordon believed Rob’s claim as he said, “I’m certain that isn’t true. Do you know what I think’s happened? I think you didn’t see Prince Harry.”

“Oh no, it was him because I have to say I followed him to the house to see if the car went in,” Lowe revealed, laughing.

From what fans have seen on Prince Harry’s latest Zoom calls, it doesn’t appear as though the prince is sporting a ponytail. At least, we hope not.