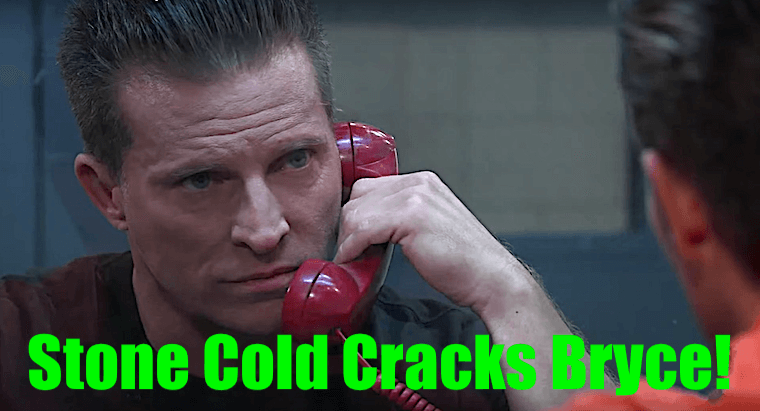 Ava is at Charlie’s Place, once more venting to Julian about the horrible Ryan Chamberlain (Lindstrom). He wants to know why she was visiting him to begin with. She defends herself, saying that she was actually there for the warden. When he wouldn’t help stop the flow of letters, she went to Ryan. Julian thinks she made a huge mistake. By giving him a reaction, she is giving him power over her. He thinks that from now on, she needs to ignore him. Ava promises that she’ll send any further letters back, unopened.

Their talk was cut short by Sonny Corinthos (Maurice Bernard). After confirming that Ava wants to see their child as scheduled after cancelling last time, he has business with Julian. Namely, the sale of the bar. Julian gets all sarcastic with Sonny and calls him a foot soldier. Sonny (reasonably) suggests he just give the money back, or honor the sale. He’s being stubborn about both, and we can’t with his victim act. It’s call manning up and not being a thief.

‘General Hospital’ spoilers: Not much to go on

Laura Webber (Genie Francis) and Kevin talk about the codicil before he leaves to deal with an assignment. Laura is frustrated by the fact they only have the jewel pattern to go on now that Valentin Cassadine (James Patrick Stuart) got rid of the painting. She is determined to solve this mystery.

She later spots Ava and offers a sympathetic ear, as she knows what it’s like to lose someone. While they chat, there’s a camera angle that makes it appear they’re being spied on.

Lucas is upset after learning that Bradley Cooper (Parry Shen) went to Nelle Benson’s (Chloe Lanier) parole hearing. Even worse, he’s upset that he had to find out through Harrison Chase (Josh Swickard). He thinks this is very reminiscent of the time before they were married. Brad had promised to change, and this one lie is making Lucas wonder what other secrets he’s hiding.

Plus, showing support for Nelle is an affront to their family. Brad apologizes and tells another lie by claiming he just can’t get over the parental nerves when called out about hiding that he’s in therapy. He promises to do better in regards to lying, and they both plan to go see Neil Byrne (Joe Flanigan).

Scott Baldwin (Kin Shriner) gets Cameron ready for the stand by going over the testimony Cameron will give in court. He thinks that Cameron will be their secret weapon.

However, after he sends Cameron away, he reveals to Elizabeth Webber (Rebecca Herbst) that Monica Quartermaine (Leslie Charleson) is on the witness list. This is not going to be very good for them, assuming she takes Frankendrew’s side. Scott vows to fight hard, though.

Meanwhile, Cameron sees Kim, who is at GH to get her job back. He pulls her aside and tries to give Kim her millionth reality check since this whole thing started. Whether or not his defense works, we don’t know yet. We do know that Elizabeth ends up overhearing them and she looks proud of Cameron for fighting for Franco.

Meanwhile, Frankendrew is being evaluated by Kevin, who is there to figure out whether he is competent to make these decisions. Frankendrew is slightly hostile, and sticks with what he’s said all along. He feels bad about what this will mean for Elizabeth and her kids, but he is who is he now, and he doesn’t want to risk being a vegetable. They talk for a while more, and it seems like Kevin is trying to make him feel bad about this whole thing.

Eventually, Kevin decides he’s heard all he needs to. He excuses himself and leaves Frankendrew to the puzzle he was putting together.

At Pentonville, Jason Morgan (Steve Burton) is meeting with Bryce Henderson (Brian Gross) about the case against Sam McCall (Kelly Monaco). He knows this is bull, and tells Bryce he knows it, too. He also points out that Andre Maddox (Anthony Montgomery) can identify him as the man who attacked him, so he’s looking at assault and attempted murder.

His only way out is to cut a deal and tell the truth about who hired him. Jason throws Peter August’s (Wes Ramsey) name out there, and the reaction is all Jason needs to confirm. He advises Bryce to think it about it. Bryce agrees to see what kind of deal he can be offered.

Almost as soon as Jason might have solved this problem, something could ruin it. It seems Bryce is sharing a cell with Ryan. Ryan, who has been writing a letter to Ava most of the episode, doesn’t appreciate Bryce’s comments about Ava’s photo, or him talking about looking her up once he cuts a deal. Ryan is handling the pen in a way that makes it clear that his roomie is about to have an accident.