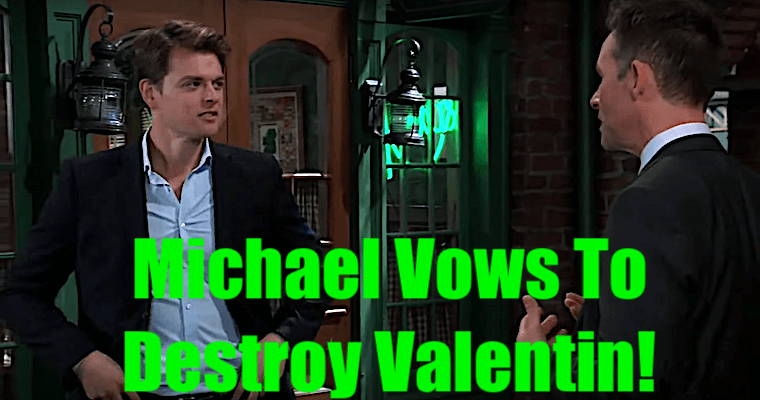 ‘General Hospital’ spoilers: Back her off

Julian Jerome (William DeVry) is angry. The smear campaign against his establishment is getting worse. This time, the fliers are referencing a murder from a year ago and wondering what’s next. He’s convinced that Olivia Quartermaine (Lisa LoCicero) is behind this and tells Alexis that she needs to get Olivia to stop. Alexis says she really doesn’t believe Olivia is a part of this. She suggests there are many other enemies out there that are actually behind the plot.

Bradley Cooper has a nightmare of Nelle admitting that her and Michael’s baby lived. She tells him that the baby was given to Brad and Lucas Jones (Ryan Carnes), and Michael is furious. He also vows to take his child back.

Bad wakes from this nightmare screaming for Michael. Lucas wants to know why he called out another guy’s name, but Brad says he doesn’t remember what the nightmare was about. It was just really bad. He ends up admitting to going on anti-anxiety meds and attending therapy. He says that Neil Byrne (Joe Flanigan) actually wants him to go, too. Lucas is open to whatever will help Brad feel better. He just doesn’t want him calling out any other guys’ names again.

‘General Hospital’ spoilers: Not her day

At Pentonville, Nell serves up a load of saccharine we swear just rotted out teeth. She’s so super-fake and saintly as she talks about working with hospice patients there and training support dogs, it’s disgusting. It was just what Martin Grey (Michael E. Knight) wanted. He says this is exactly how she’s going to eventually succeed, even if it takes time. That, and taking responsibility for what she did.

It won’t work today, though. Ultimately, the board decides not to grant Nelle parole. She’s upset, but Martin promises her this was a good day. He believes she did make a good impression, and that if she keeps this up, she might just get out next time.

Following Valentin Cassadine’s (James Patrick Stuart) lie about not being involved in the Sasha Gilmore (Sofia Mattsson) scam, he and Nina are back together and talking about something they can do with Charlotte Cassadine (Scarlett Fernandez). Valentin, however has something else on his mind. He wants them to head to City Hall and make it official.

‘General Hospital’ spoilers: Dredging the past

Lulu Spencer (Emme Rylan) and Maxie Jones (Kirsten Storms) are sitting nearby, watching them. Lulu can’t believe that Nina is back with Valentin after what happened. Maxie, knowing that Nina was happy with him, isn’t as upset. This leads to a bit of a fight between them, with Maxie insinuating that she was just getting back at Valentin. Lulu brings up Maxie’s lie about Georgie, which irritates Maxie. She thinks that things should have been left alone, as the aftermath is proving to be really bad.

About that. Part of what they see that upsets Maxie is Sasha getting arrested at another table. Harrison Chase (Josh Swickard) brings her in for various charges and Sasha isn’t very surprised. She thinks that Nina has every right to be angry and hold her responsible.

Michael calls Alexis, who comes down to the PCPD to help. She demands Michael leave so she and Sasha can discuss this alone.

Alexis is very skeptical when Sasha Gilmore says that Valentin had nothing to do with this and points out that Robert Scorpio (Tristan Rogers) would be happy to cut a deal. Sasha sticks to her story, so Alexis decides to try bargaining with Nina.

When Nina arrives at the station, Alexis tries to sell her on the idea of dropping the criminal case. She says Sasha will pay her back for everything Nina bought for her, as well as her work at Crimson. Nina doesn’t want to make a deal. She is still too angry, and points out that Sasha lied to her face for a long time while knowing it was wrong. She could’ve dropped it, but didn’t, so no deal.

Michael isn’t taking this situation lying down. He confronts Valentin while things are going down at the station. He says he knows for a fact that Valentin was involved in this, and that he’d checked Sasha’s story thoroughly after she confessed the truth. She’s legit, but he isn’t. He insists that either Valentin tells the truth and ends this, or he will make sure that Valentin goes down with Sasha.

Finally, Alexis meets with Kendra Lennon (Michelle Argyris), the life coach who could probably use a little coaching and therapy of her own. She tells Kendra that she had a doctor check out the supplement she gave her and got the all-clear. In fact, the supplement gives her energy and is helping her sleep better, so she wants a refill. Kendra is happy to oblige.

Later, Kendra visits Kiefer Bauer’s (Christian Alexander) grave and tells him how Shiloh (Coby Ryan McLaughlin) called and told her that Alexis ran him over on purpose. She is ready to ger revenge for what Alexis did to him. To do so, she pulls out a container of the supplement right there and adds something to the mix.