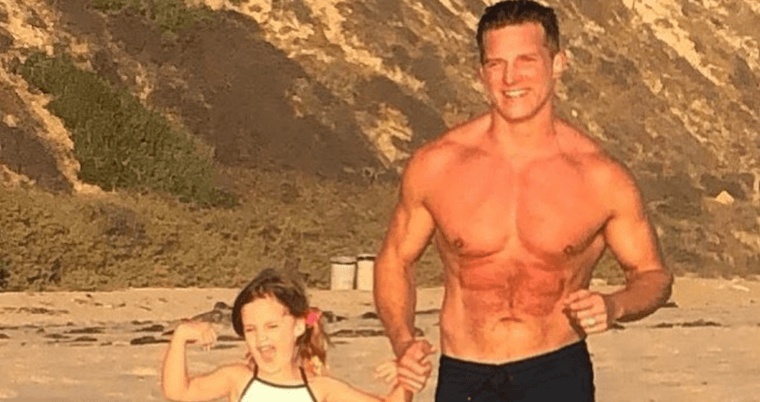 ‘General Hospital’ (GH) spoilers find that the temperature might be dipping in many places across the nation but it looks like things are definitely heating up for Steve Burton and in more ways than one. As a matter of fact, the ‘General Hospital’ star, who is best known for his role as Jason Morgan, couldn’t help but show off what he was blessed with by going shirtless on social media for his fans. And just to think, the holiday season is not even here yet.

A lot of people would say that this just another case of “Steve being Steve,” but others say that it’s another reason to celebrate it being the middle of the week! Sharing a photo of him running on the beach with his daughter Brooklyn, he captioned it with, “Happy Friday! Nothing better than beach time with the Brooks! #Grateful #beachin#nofilter”

Steve also shared another photo from the gym and wrote, “Always striving to get better. Not just physically but mentally too… always reading, always learning, always growing..there is no doubt its Mind, Body and Spirit. As the great coach Lou Holtz said “In this world you’re either growing or you’re dying so get in motion and grow.” Remember anything is possible if you put your mind and focus on it.”

Clearly, the man is focused on always looking and doing his best. Funnily enough, some of his ‘General Hospital’ co-stars couldn’t help but pick on him on his Instagram account. Chad Duell, who plays Michael Corinthos, wrote, “I taught you well.” Maurice Benard, who is known for his role as Sonny Corinthos, added, “Hold on let me show you my arms!”

Needless to say, everything was said in good fun. Either way, we have a feeling that we will be seeing much more of Steve like this in the future!

In the meantime, let us know your thoughts in our comments section below. And as always, come back to Daily Soap Dish for all the latest news, updates and spoilers on The Young and the Restless, General Hospital, Days of Our Lives and The Bold and the Beautiful right here.

Happy Friday! Nothing better than beach time with the Brooks! #Grateful #beachin #nofilter