The big debate is on and no one is any the wiser about the drug slipped to Alfonso. They do think he isn’t well, though, his team wants to cancel the appearance to get him checked out. Berrio insists he’s fine. Obviously, “Valeria” agrees with him. He’s the boss, so they have to go with his wishes.

Then we get into a bunch of talk about political issues that frankly are shared all over social constantly. We’re beyond tired, and stats frankly make for boring TV. However, things do end up taking a dramatic turn. During one question, Berrio, who’s been a bit aggressive, suddenly totally loses it. He actually throws his podium partway across the stage and it smashes. Then, he begins attacking Roberto Conde (Alejandro Martínez). Nelly Bayana (Lina Nieto) wants to rush to his aid, she’s stopped. “Valeria” has called security and they’re not allowed to go on the stage.

Meanwhile, Berrio is hallucinating his team telling him to put a few bullets in Conde. He pulls out a gun and yells at him to “Say my name!” Something about that line just cracks us up. “Valeria” and the others apparently realize there is no other choice and storm the stage. “Valeria” manages to take the gun from Berrio and disarms it.

In the aftermath, Berrio is in the hospital and appears to be in a coma or something. Enrique Molina (Juan David Naranjo) comes in to give Nelly and Lucrecia Olivares (Eliana Diaosa) the bad news they were expecting. Following that mess, Berrio is down to 1% in the polls. It’s over.

“Valeria”, who’d just been congratulated by Mano Negra (Juan Pablo Gamboa) on her job well done, comes in and hears them. Playing the loyal girlfriend, she lectures them all about their disloyalty to jump ship now. She thinks Berrio’s character is unreproachable and he can come out of this disaster. The rest of the team decides to start working on the PR, and “Valeria” informs them no drugs were found in his system.

Lucrecia, remembering the previous videos of people going crazy, thinks this is familiar and asks if there’s a connection. “Valeria” admits that the situations are similar.

Mano Negra is thrilled over how things turned out. He and Santos Castellanos (Luis Carlos Fuquen) gloat over the footage as Santos basks in his own genius. They watch Conde on TV as he goes on about the horrible display the night before. He, however, is a forgiving kind of guy, and holds no ill will. Mano Negra approves. Apparently, Conde is following his script to the letter. 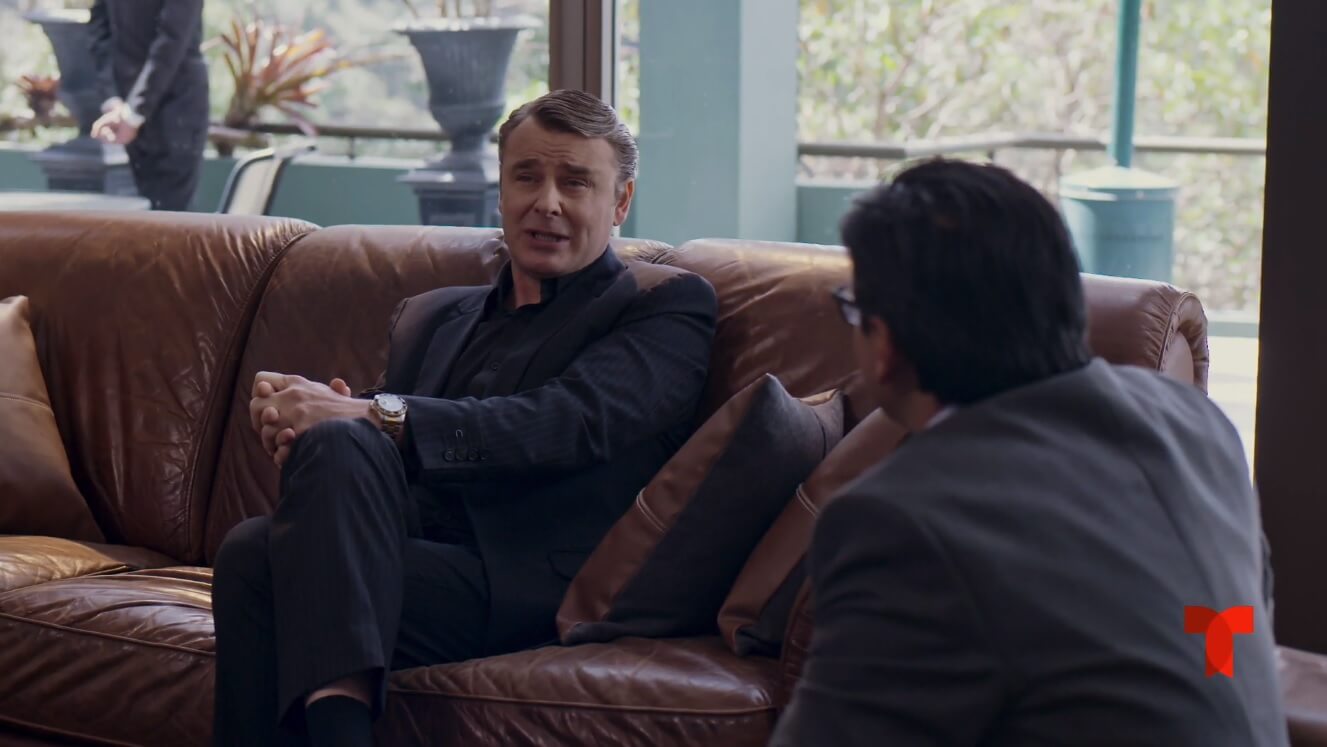 Mano Negra is even happier when Diabla calls to inform him that Santos was right. Tests were done, and the drug in Berrio’s system was undetectable.

Given what happened the night before, Aurelio “El Titi” Jaramillo (Gregorio Pernía), Pilar (Margarita Reyes) and Pablo Móron (Alí Humar) are in planning mode. Titi thinks this is obviously the work of Mano Negra, but it’s not XY4. It’s something else. Pilar wants to get her hands on it to study, but there are some other concerns they need to deal with. Given the possibility of Mano Negra’s cartel taking over the government, they figure the lesser evil is backing Conde’s competition. He may be ready to declare war on all cartels, but at least they’ll be in the same boat as Mano Negra. Is everyone forgetting the guy doesn’t look capable of even opening his eyes, much less running a government?

Titi’s bored of the politics and thinks they need to focus on what’s most pressing right now—moving their product. He knows someone that can smuggle the pills as candy by plane. Móron had been thinking of using mules, but Pilar shot that idea down. They’d bee seen too easily in an x-ray and even one pill breaking could be disaster, much less the 20-30 he wanted to move in each person.

To get that all going, Titi calls Armando Cardona (Julián Trujillo) and asks him to contact the airline owner he knows. When Cardonita gets back, he has a little more information to share with them about the girl who went viral after taking XY5.

They know from a bunch of info that Daniel and Rogelio dug up that Mano Negra has shown up in a lot of pictures with big shots in different worlds, but is never identified. After looking at the articles, Sombra confirms this is the guy he used to work for. The one who sent him to jail and had him tortured there.

After discussing the situation, Cata Grande has a plan. She thinks that putting his real identity in the press is the best way to draw Mano Negra out.

Mateo has had enough. He visits Doña Hilda to tell her what he knows about this attack on her. She doesn’t wanna heart it. He pressures her to let him in to talk, and eventually makes her lose her patience. She throws the bucket of water she was using to clean her porch on him and tells him to go away. She wants nothing to do with him. Seeing he has no other alternative, Mateo says he knows who made the video and got it to go viral.

The explosions are all over the place this season. This time, it’s Salvatore Miranda’s (Martín Karpan) office. It turns out that Leticia was dropping by his home not for help, but to tell him about the attack. He and Joana (Bárbara Najas) are shocked and rush to the scene. Salvatore is obviously upset to see his workplace destroyed.

So who did it? Well, as Esteban Calvo (Manuel Gómez) tortures Albeiro for being a bad boy and escaping, he confesses it was him. He wanted to teach this guy a lesson about messing with “my lady”.

El Final del Paraíso spoilers: All for nothing?

In other news, let’s get back to the NWO and their goal to get Conde in office. That might be harder than they think. Sure, he looks innocent now, and Berrio is basically done, but there’s a complication.

If you remember from previous episodes, Lizeth Muriel (Margarita Torres) obtained videos that Dayana “La Demonia” Muriel (Elianis Garrido) took of her clients. One just happens to be Conde, who is preying on an obviously scared minor. Coronel Granados (Luis Fernando Bohórquez) is disgusted by this, and takes the videos to the Attorney General, who promises action.

‘Days of Our Lives’ Spoilers: Xander And Sarah’s Chemistry Off The Charts; What’s Next For Budding Romance?