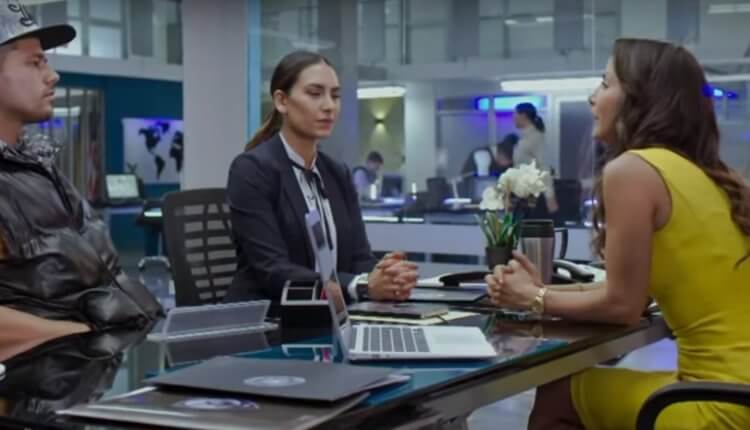 Natalia had predicted that Iván Calvo (Carlos Benitez) will come around for the sake of his dad’s life. Esteban Calvo’s (Manuel Gómez) world is too dangerous. She turns out to be right, as he appears at the DEA office to speak with her and Cata Grande. He’s ready to help. Cata Grande offers him the opportunity to join their informant training program, which he hesitates to accept a moment.

Eventually, he says yes and Cata Grande asks Natalia to handle the details. She takes Iván to another room, where she tells him that he’ll have to take a series of tests. He’s nervous, but she is positive that he’ll be a good fit and help them catch La Diabla. He agrees that the woman is a menace that needs to be dealt with.

As the Telenovela Gods would have it, La Diabla herself is listening in outside the room. Vanessa catches “Agent Valeria” eavesdropping and questions her. Diabla claims that she has had some suspicions about Natalia since Vegas, which she’d brought to Cata Grande. She believes that Natalia is the traitor that is surely in their unit.

As if to make this worse, Vanessa Salazar (Estefanía Gómez) decides to speak to Natalia about Iván, who she’d just seen leave. Natalia says that she is unable to explain who the guy is right now, which is bound to make Vanessa take “Valeria” more seriously.

Today, Cata Grande needs to speak to Coronel Granados (Luis Fernando Bohórquez) about several things. First is the “death” of Aurelio “El Titi” Jaramillo (Gregorio Pernía). She says she saw his body herself, but she’s worried about what this will mean long-term. She thinks that it will create instability in the Colombian drug world and that he should be prepared to deal with that. But that’s not all she wants to talk about.

Lizeth Muriel (Margarita Torres) is brought in to discuss her sister and the videos she made. Cata Grande has seen them herself and believes he needs to have them. It shows some horrible stuff, and people need to pay. He assures her that will be the case, even if there are some important people in there. He’s also very impressed with Lizeth. She’d explained how she obtained the videos and how committed she is to making her sister pay for her crimes.

Cata Grande makes a second epic blunder in as many episodes by assigning “Valeria Montes” (Reyes) and Natalia to Berrio’s security. Her logic is that this will force the two to cooperate and learn how to work better together. We think that putting two feuding agents in charge of the security of a candidate who’s likely being targeted by cartels is a bit stupid. But then, we guess she hasn’t changed all that much since Sin Senos No Hay Paraiso (Without breasts, there is no paradise). She’s just actually managed to get some legit status and money rather than luring in narcos with her former implants.

El Final del Paraíso spoilers: Not that kind of girl

Diabla continues playing with Berrio’s feelings today. She makes him believe that she is still very offended by him trying to get her into bed. She claims she thought he was a serious person who wanted a relationship, not a fling. He assures her that he had no ill intentions the other night, and wants to build exactly what she’s talking about. She decides to give him another opportunity.

On a related note, she tells Mano Negra (Juan Pablo Gamboa) that she has Berrio right where they want him. Mano Negro than arranges for Santos Castellanos (Luis Carlos Fuquen) to meet up with Diabla outside the venue and give her the magic pill. He would rather ask her out, but Mano Negra doesn’t think he is her type. They need to worry about the objective.

A video surfaces today, following the “theft” of Joana’s (Bárbara Najas) computer and phone. Salvatore Miranda (Martín Karpan) is shocked, and Doña Hilda is completely humiliated and hurt. She, in fact, blames him for this video, as they were the only ones around at the time. She runs off, and Salvatore chases after her. She begs him to leave her alone and he complies. Doña Hilda hurries home, where she reads herself the riot act over being dumb enough to trust him before breaking down in tears.

Mateo Matiz (Steven Salcedo) is very upset by this video and thinks that Joana is behind it. He looks so disgusted that we think a very epic catfight is on the way.

As to the other cartel, they believe that the best way to deal with being beaten to the punch is to get ahold of Mano Negra’s newest lab rat. With Pilar’s (Margarita Reyes) help, they manage to locate the girl through her social media accounts. Pilar actually gets the exact location. They expect Armando Cardona (Julián Trujillo) to go there and get her. He needs to make her talk, one way or another.

Meanwhile, the mom of the woman Diabla stole her face from isn’t deterred by being thrown out of the Berrio event. Leticia (Marcela Posada) is convinced that she saw her daughter’s face and she’s going to get answers. While the face was the same, it was like there was another soul in her body. She notes a few physical changes, but also thinks there is an evil in her eyes.