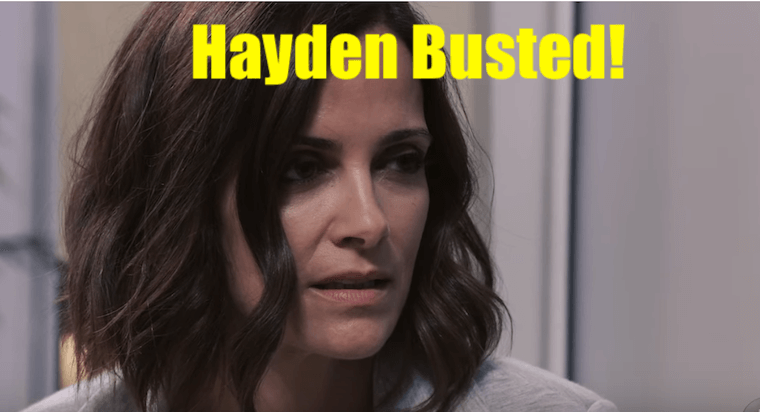 ‘General Hospital’ spoilers: Back off

Franco, despite Elizabeth Webber (Rebecca Herbst) showing him cell phone pictures of their wedding reception, his driver’s license, and (of course) his face in the mirror, won’t budge. He is convinced he’s Drew Cain (Billy Miller) and refuses to accept this story he’s being sold. He starts getting dressed while they’re out of the room. Elizabeth tries to stop him from leaving, but Drew insists on letting him be. He knows that Franco is going to stick around because he’s technically him. He might be wrong…

See, Franco runs into Kim Nero (Tamara Braun), who was stopping by GH to give her notice. She’s confused when he acts a bit off, but is completely stunned when he says something Drew did. He takes it a step further, knowing she’s planning to leave Port Charles, by suggesting they leave together. Elizabeth happens to be walking by when she sees him kiss Kim. Kim, by the way, doesn’t exactly look like she’s trying to fight him off…

Lulu has dropped by for the Aurora Media vs. The Invader game, but she’s not planning to play. She doesn’t feel up to it, but she’s willing to watch and cheer them on. Problem is, the team can’t play unless she does—they’re short one player.

As luck would have it, Dustin Phillips (Mark Lawson) has been enlisted by an absent Hayden to play for her. Liesl Obrecht (Kathleen Gati) objects, as it’s for employees. Jasper Jacks (Ingo Radmacher) hears this and hires the guy as Aurora Media’s official driver.

With that settled, Lulu is suddenly more enthusiastic about playing and asks if he wants to make it interesting. After the game, they exchange some banter at the after party that leads to him taking her phone when she steps away to put his number in it.

Liesl is absolutely hilarious today as she turns out to be a major killer on the field. Besides being able to state the rule about employees only playing (and the paragraph and section said rule appears in), she is not having it when Peter August (Wes Ramsey) asks her to back off Lulu because this is supposed to be fun. Liesl counters, “We will go out there and play to our utmost, and smile while doing it. Fun will be had!” Her delivery totally sells it.

So why did Hayden hire Dustin to sub for her? She has told Jax that Sasha Gilmore’s (Sofia Mattsson) records indicate she’s just got a flu, and it’s a perfect chance. She wants him to come with to the Island, but he refuses.

She goes on her own and searches through the office before she sends a message to Jax she hasn’t found anything yet. She’s just about to explore the trophy room when she’s interrupted

‘General Hospital’ spoilers: What’s it worth?

It’s Liesl, who’d decided to go home and pretty up to impress Jax, catches her. She says she can help Hayden find whatever she’s looking for—if she tells what it is. Otherwise, she might just tell Valentin Cassadine (James Patrick Stuart) what she’s up to.

Sam and Jason are shocked when Robert drops by to get her statement about the incident with Shiloh (Coby Ryan McLaughlin). They weren’t aware of what happened later with Franco. They are, however, happy to know that Shiloh is now facing a mountain of charges there is no way he’s surmounting.

Lucas is surprised to learn his dad is planning to leave town. When Julian steps away a minute, Kim takes the opportunity to say she’s sorry, but despite Julian trying to play it off, she is the real reason he’s taking off. She feels guilty about pulling him away when he and Lucas have just been getting closer. She tells him to say the word, and she’ll inform Julian she’d rather do this alone.

Later, Lucas asks Julian if he really wants to leave with someone who was going to leave with or without him. He also lets Julian know that he likes having him in is life, and is sorry for making him feel unwelcome. Julian assures him that he’s given Lucas a lot of reason to.