There is no shortage of anime on Netflix but you’ll find yourself somewhat disappointed by the selection. Some of it really hits, some misses. You don’t really notice this on a platform like Crunchy Roll since their thing is mostly anime—with a side of live-action dramas. Those tend to be alright. I took a gamble on one series. Let’s get into Cagaster Of An Insect Cage.

In 2095, a virus hits which turns humans into mutated insects. When the show opened with this, I lurched forward in my chair. It was mildly intriguing. Where are they going with this? There were efforts to combat this but humanity has pretty much fallen to one-third of the population. 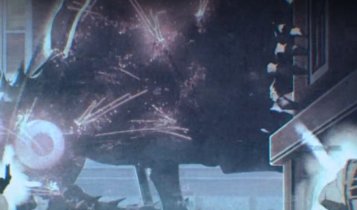 Before the fall, research showed that these monsters—Cagasters—are mostly indestructible. Bullets and blades have little to no effect on them. Mostly. There is a weak spot that can kill them but it’s recommended that people kill the host before they transform. If you guessed that the weakness is somewhere behind their neck, you win a prize!   Congratulations on knowing your Attack on Titan very well. Just don’t think Cagaster Of An Insect Cage will give you strong Attack on Titan vibes.

The Girl In The Desert!

Fast forward to 2125 and we two people trying to escape a horde of Cagaster by jeep. Elsehwhere in this hostile landscape, there are two people scavenging in the desert. Well only one, Jin, is scavenging. His friend Kidow is on protection duty. Kidow is an exterminator skilled in killing Cagasters or anything else you put in front of him. Their work is interrupted when they notice the two people fleeing.

They flee as well but some reason, they aren’t the target of the Cagasters. This allows Kidow to take them on—ineffectively. He does eventually do damage during the harrowing mobile escape. Jin and Kidow go to check on the other people who crashed down a hill.  The older man driving the jeep is mortally wounded while the young girl with him is unharmed and unconscious. Before he dies, the man tells Kidow to take his daughter Ilie to her mother. Kidow agrees to the dying man’s request.

Ilie awakens to find herself being carried by a stranger and runs to her father’s side. She sees that he is dead and breaks down. Kidow doesn’t have the time nor the patience for this and smacks her. She gets in the truck with them and they make their way back home.

Once back at the fortified city of 05, they have to go through the check-in. At the moment, Ilie notices an ill man in the truck behind them. At Mario’s bar, the Tank Force are enjoying the evening. The Tank Force is 05’s military presence in the area. The leader of 05’s Tank Force is drunk and voicing his hatred of exterminators when a Cagaster attacks outside. It appears that the sick man in the truck has transformed! 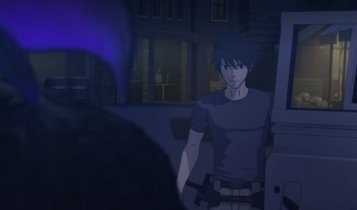 Too drunk to do anything useful, the commander is stopped by another member of the Tank Force. Meanwhile, Kidow distracts the monster and kills it with little effort.   Once inside Mario’s, Kidow asks Mario—the powerfully built and androgynous proprietor—to allow Ilie to stay the night. He also asks them to find Ilie’s month. Since Mario is a bartender, they come across plenty of news and value information. Ilie tries to adjust to her first night away from family and finds Kidow training alone. There is a confrontation that results in Ilie running away the next day.

In the large 05, Ilie tries to find a way to leave 05 for the place where she came from. Meanwhile, Kidow and Mario are in the middle of a fight over Kidow’s cold reaction to Ilie leaving. Mario believes Kidow should follow through if he saves someone. Kidow believes that if the girl left then that’s that and there’s no need to involve himself further. The fight ends with neither side necessarily backing down.  Ilie has strayed far from the more developed part of 05 into what appears to be a ruined area. Some disguised kids frighten her and as she tries to escape, she falls into a hole. She is saved by an older kid named Naji. 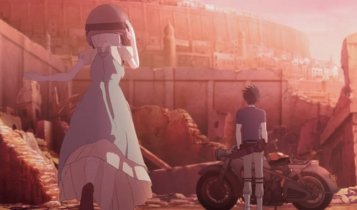 While the two bond, Naji tells her what happened to the area. Apparently, there was a Cagaster outbreak and the Tank Force and exterminators were forced to close off part of 05. Many people lost their lives including a lot of the children living in the ruined area. While Kidow looks for Ilie, she tells Naji about where she came from. She’s from Area A where it was country and forest. Lots of greenery.

Eventually, Kidow finds Ilie and eavesdrops on her conversation. He leaves something for Ilie, a picture of her father. Knowing Kidow was the only person it had it and that he came looking for her, she chases at him, promising to visit Naji again. Once she catches up with the exterminator and apologizes to Kidow for running away. The two ride back to Mario’s where everyone is happy to see her safe and sound.

This wasn’t a bad first episode but it wasn’t a great one. The concept would need to grip you enough for you to continue watching. I enjoyed the Kidow parts even though Kidow is a bit on the bland side at first glance. He’ll likely become more rounded out as the show continues.

The parts with Ilie slowed things down dramatically but they were necessary. It would get boring real fast if it was just nonstop Kidow killing Cagasters with no story development but the pace didn’t need to slow to a crawl. Episode one seemed to go on longer than I thought it did.  We’ll see if Cagaster Of An Insect Cage rebounds in the upcoming episodes. For any other soap opera and entertainment news, please visit Daily Soap Dish. For more royal and celeb baby news, come back to Celeb Baby Laundry.