Netflix’s Castlevania recently dropped its third season and it’s a wild ride. I won’t give anything away but this is an anime that really escalates as the seasons go on. The storytelling is steady and the action is great. Each episode burns through quickly and before you know it the season is over. I like that each season gets more episodes and the story stretches further without falling into lulls. Let’s take a quick look at season one and two in case you forgot what happened.

The first season one kicks off in Wallachia, the Romanian region ruled by the real-life Dracula during the mid 15th century. Our story starts in 1455 where a young, aspiring doctor named Lisa meets Dracula. She wants training in medical services and becomes his protégé and eventually wife. The two have a son who becomes Alucard. Unfortunately, Lisa is killed under suspicion of witchcraft two decades later.

This drives Dracula over the edge and he aims to wipe out all mortal humans. Alucard is in “I’m too drunk to taste this chicken” and refuses to join his father’s crusade. Dracula kicks things off by wiping out the church responsible and releasing his minions on the land. This turns the villagers against the nobles. 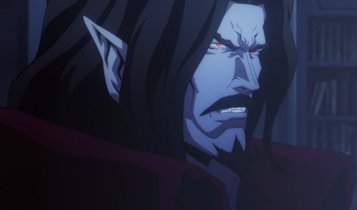 Trevor Belmont is the current head of the Belmont family but he’s a mess. He pretty much flees from the family responsibility of killing creatures of the night, demons, and such. Trevor eventually joins up with Sypha after saving her and other Speakers from the church. The church aims to kill the Speakers to curb the peasants’ dissent. It is in saving the Elder of the Speakers that he learns about someone who can help defeat Dracula and his armies.

The important thing to remember here is that Trevor doesn’t want to be involved in any of this. Like Alucard, he’s too drunk to taste this chicken—but taste it he shall. The hero he ends up finding is the dhampir Alucard. Trevor and Alucard battle before coming to a standstill.   He’s been in torpor for years and upon hearing about Dracula’s actions opts to help Trevor and Sypha. Despite this, Alucard and Trevor aren’t on the best terms.

The Cliff Notes Version of Season 2

This season kicks off with a flashback to Lisa’s death and the events that drove Dracula to his hatred of humanity. Dracula gets his crew together with two human necromancers serving as his left and right-hand men.

Trevor and Alucard are still having their disagreements while Sypha tries to keep their team together. The trio head to the Belmont library—now in ruins—to find something that can help them defeat Alucard’s father. This season is mainly the build-up to the big fight as the fearless vampire killers try to find Dracula’s castle which can move. 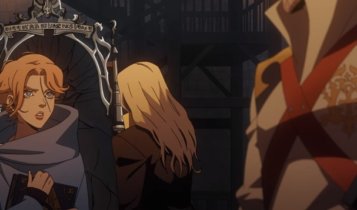 The important things in this season are Team Vampire Killers’ progress in taking down Dracula and dissent in Dracula’s ranks about how he is carrying out this war. Many feel he has no direction. While his necromancers Isaac and Hector are loyal to him, Hector is compromised by Camilla, an elite vampire who wants to use Dracula’s war for her own purposes.

Things escalate into a vampire war with Dracula’s forces and Camilla’s allies clashing. Trevor, Sypha, and Alucard take advantage of the situation and are eventually able to defeat Dracula. Season two ends with Alucard seeking death but his new friends convince him to live. He takes up residence in the Belmont library while Trevor and Sypha start a new quest together.

Whew! A lot happened in fourteen episodes but now you’re caught up and ready for season three of Castlevania. It hit Netflix earlier this month and introduces new characters and a new quest for our heroes.

I’m interested to see if it grows beyond the Castlevania III game which the series pulls from. The source material spans centuries and generations of the Belmont family and their allies, so I’ve got high hopes for this continuing. So far, the series has pinched from other games in the franchise.  You can check out the trailer for Castlevania season three below. For any other soap opera and entertainment news, please visit Daily Soap Dish. For more royal and celeb baby news, come back to Celeb Baby Laundry.