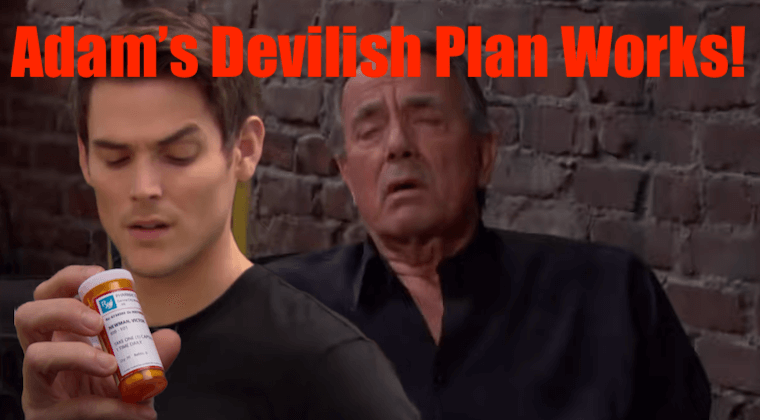 ‘Young and the Restless’ (Y&R) spoilers find that Phyllis Summers (Michelle Stafford) crashes a party that she clearly wasn’t invited to while Zoe Hardisty (Anna Grace Barlow) takes matters into her own hands at spikes a signature drink at Abby Newman’s (Melissa Ordway) new hotel. Mariah Copeland (Camryn Grimes) also has her eye on Theo Vanderway (Tyler Johnson). Here’s what you need to know.

‘Young and the Restless’ Spoilers: At the Crimson Lights patio

It begins at the Crimson Lights patio, where Nikki Newman (Melody Thomas Scott) is bringing Victor Newman (Eric Braeden) a coffee. Meanwhile, Adam Newman (Mark Grossman) admits to Phyllis what he did with his father’s pills. Phyllis thinks that he might be going too far. Victor is suffering from a weak spell. Adam goes inside the patio but Victor doesn’t want to see him. Nikki thinks that Victor is just stressed.

‘Young and the Restless’ Spoilers: at Kyle’s Abbott apartment

Back at the apartment, Kyle Abbott (Michael Mealor) realizes that his tie is missing. Lola Rosales (Sasha Calle) is worried about his feud with Theo. Rey Rosales (Jordi Vilasuso) appears. Lola thinks that her brother might meet someone at the hotel opening.

‘Young and the Restless’ Spoilers: At Nick Newman’s place

At Nick Newman’s (Joshua Morrow) place, he and Sharon Newman (Sharon Case) talk about what school they want their daughter to attend. They then start talking about the grand opening of the hotel with Nick adding that he hopes to one day see Sharon and Chelsea Newman (Melissa Claire Egan) as friends.

At the park, Mariah runs into Theo and his social media friends. Mariah tells Tessa Porter (Cait Fairbanks) that she has no trust in him.

Back at the ranch, Nate Hastings (Sean Dominic) takes a look at Victor and says that he wants blood work done. Victor wants to go to Abby’s opening, but Nikki doesn’t think that it’s a good idea. Instead, she wants the chef to make his favorite meal and for him to stay at home.

‘Young and the Restless’ Spoilers: Back at the penthouse

Back at the penthouse, Adam tells Phyllis that he doesn’t feel guilty for what he did to Victor. They make a beat about his health. Phyllis says that she wants Adam to stop going after her family. Adam can’t help but wonder if she is talking about Nick. After she leaves, Adam takes one of Victor’s photos and crumbles it in his hands.

‘Young and the Restless’ Spoilers: At the Grand Phoenix

At the Grand Phoenix, Abby and Chelsea are getting ready for their big night. Zoe arrives ahead of everyone but can’t help but intently stare down Summer Newman (Hunter King). Everyone else arrives, including Nick, Lola and Kyle. Everyone is mingling and Theo is taking selfies with all of his social media workers. Theo gets a little too comfortable at the party and accidentally breaks a glass. Zoe rushes over to him and spikes the Grand Sangrias with drugs.