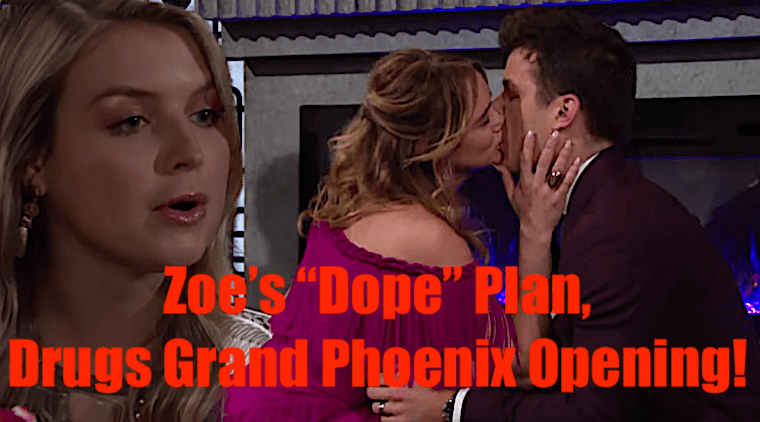 ‘Young and the Restless’ Spoilers: The Grand Phoenix gets lit

‘Young and the Restless’ (Y&R) Spoilers for the week of Monday, September 9 to Friday, September 13 indicate that the opening of the Grand Phoenix has gone off with a bang! Just not quite the type of bang that Chelsea Newman (Melissa Claire Egan) and Abby Newman (Melissa Ordway) hoped for. Looks like they will be left reeling from Zoe Hardisty’s (Anna Grace Barlow) plan to ruin things.

As it turns out, Zoe creates a distraction which causes Theo Vanderway (Tyler Johnson) to drop a glass and while everyone is trying to get their bearings, she spikes everyone’s drinks with drugs! As the drugs take effect and the club gets rowdy, this will cause Abby and Chelsea to flip out – this wasn’t what they had in mind at all!

‘Young and the Restless’ Spoilers: Phyllis has something nice to say for once?

Just their luck, Phyllis Summers (Michelle Stafford) will show up to this event, but only to do some well-wishing! This will come as a complete shock to Abby and Chelsea, and probably the rest of us as we watch her congratulate the two, and wonder which circle of hell has frozen over. But then, she realized early on that she wouldn’t have to wreak havoc at this club because the drugs that Zoe brought in were going to do all her dirty work for her. Problem solved! Now all she has to do is sit back and relax.

‘Young and the Restless’ Spoilers: Sharon and Rey hook up

Sharon Newman (Sharon Case) can’t seem to make up her mind. One minute she’s fogging up the screen with Adam Newman (Mark Grossman) and the next she’s pining away for Rey Rosales (Jordi Vilasus), however this week it looks like it’s Rey’s turn to be on the receiving end of her unrequited affections. It also looks like he’s pining away for her too and the whole Adam business won’t matter for much longer because the drugs will make them both really honest with each other about their feelings and they’ll make out. Yay? At least until the drugs wear off. Hah!

‘Young and the Restless’ Spoilers: Kyle and Lola – our anti-drug!

Looks like Kyle Abbott (Michael Mealor) and Lola Rosales (Sasha Caille) won’t be partaking of the drugged beverages, but that will make things oh so much worse for him when Summer Newman (Hunter King) decides to plant one on him out of the blue. Poor Lola will think that he’s a two-timer, but in reality he’ll be just as shocked (and probably horrified) as Lola is. Summer’s just not herself, she wouldn’t be even considering this if it weren’t for those drugs that Zoe brought into the club. Remember kiddies, just say no!

Of course when Paul Williams (Doug Davidson) starts investigating however, things will be brought to a screeching halt. The two top suspects in his mind are Phyllis and Zoe. Now, Phyllis could point fingers, but it looks like she’ll be too busy gloating about Abby and Chelsea’s misfortune to actually give up any information on Zoe. So I guess Zoe’s safe for now? Or is she? Stay tuned!!!