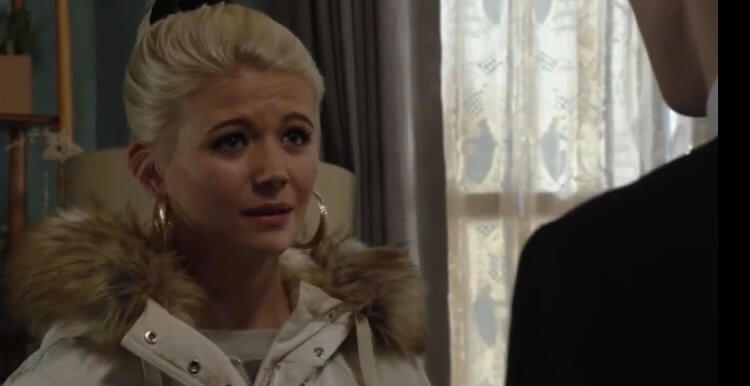 EastEnders Spoilers indicate that one relationship in EastEnders could be hitting the buffers this week, as Lola Pearce is set to drop a massive bombshell on Jay Brown. The revelation will leave their relationship in a precarious position and could have lasting effects on the rest of Walford.

The mood is already at an all-time among the family following the devastating death during the boat party last week, but Jay will try and take Lexi’s mind off the situation by planning something special for the youngster. But, those plans could quickly be stopped in their tracks as Jay is rocked by Lola’s admission.

EastEnders Spoilers: What Was Lola’s Revelation?

There has been no word as yet regarding what Lola has told Jay, but it has been teased that it could have an impact on their relationship. Of course, that doesn’t mean it could be a bad revelation, as she could always be pregnant. Viewers will be hoping that their relationship can survive this.

Later on in the episode, Jay will be encouraging Ben Mitchell to get out of his bad mood to ensure that Lexi has the best possible time. Jay tells Ben that he needs to stand up for Lexi and be there for him; something that he immediately does for the sake of the youngster.

EastEnders Spoilers: End Of The Road For Lola and Jay?

Throughout the episode, Jay can’t stop thinking about the news that Lola has dropped on him. It has been teased that she makes a huge decision at the end of the episode, but could it be the end to their romance? Viewers have already speculated that she could be about to leave Walford.

The closing scenes will see Ben open up about his fears surrounding the boat accident, but could that open the door for Lola to tell him about her secret? Viewers will have to continue watching to see how this plays out for the couple and Ben. For any other soap opera and entertainment news, please visit Daily Soap Dish. For more royal and celeb baby news, come back to Celeb Baby Laundry.

NBC ‘Days Of Our Lives’ Spoilers: Beautiful Blackmail Over Baby Mickey – Gabi DiMera In The Clear!