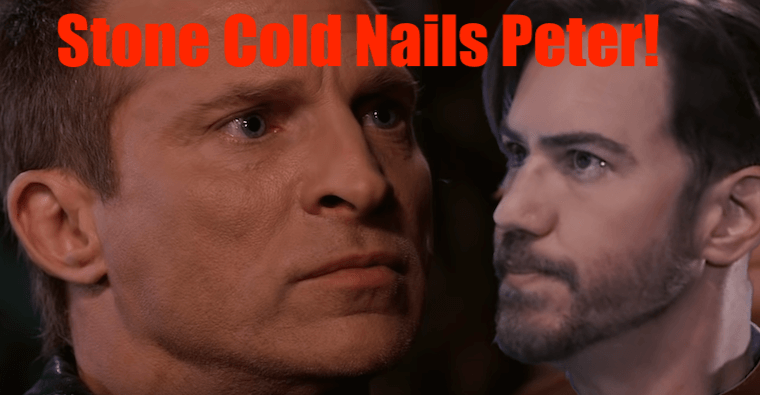 ‘General Hospital’ (GH) Spoilers for October 7th 2019 indicate that Jason Morgan (Steve Burton) will be the one to put two and two together about Peter August (Wes Ramsey) and Shiloh Archer (Coby Ryan McLaughlin) working together. He got a tip from Dev Cerci (Ashton Arbab) that Peter was carrying a gum bag when he showed up at the boat on the night of baby Wiley Cooper-Jones’ (Theo and Erik Olsen) kidnapping and to Jason, something will smell rotten in Denmark, or in this case, Port Charles.

Both Sam McCall (Kelly Monaco) and Jason will be mystified as to why those two would be working together in the first place, on the surface there is really no connection between them but they’re looking for a reason to exonerate Sam from Shiloh’s murder and this could be the ticket.

‘General Hospital’ Spoilers for October 7th: Watch out Peter, you’ve got a Jackal on your trail

Damien Spinelli (Bradford Anderson) might be the one to help them make the connection, seeing as he used to be involved with Maxie Jones (Kristen Storms), the girl that Peter is currently lying to. We all know that Spinelli and Maxie are a thing of the past (currently), but that doesn’t mean that the Jackal is going to sit back and let the Mother of his child be victimized by someone like Peter. He’ll want to help Jason and Sam take Peter down, but in the meantime he’ll have to play it cool and keep his suspicions about Mr. August to himself so as not to clue Maxie in.

‘General Hospital’ Spoilers for October 7th: Will there by crying in the chapel?

Lulu Spencer (Emme Rylan) is sweating bullets in the wedding chapel waiting on Nina Reeves (Cynthia Watros) to arrive. Her date, Dustin Phillips (Mark Lawson) is the only thing standing between her and spilling the beans to Nina about bridegroom Valentin Cassadine’s (James Patrick Stuart) whole fake daughter scam, he managed to convince her that maybe now is not the time to tell Nina all about it but that doesn’t mean she can forever hold her peace.

In fact, that may be just exactly what she does, when the priest asks if anyone has any reason for the couple not to join in union with each other, Lulu may just speak up and totally ruin not only Valentin and Nina’s lives, but Sasha Gilmore’s (Sofia Mattson) as well. Yes, Sasha was eaten alive by guilt but she wasn’t going to say anything until after the wedding. Will that come back to bite her? We’ll see.

Josslyn Jacks (Eden McCoy) will sit Dev down and tell him that she told her Dad, Jasper Jacks (Ingo Rademacher) his real identity, that he’s not “cousin Dev” but rather, a kid from Ankara that step-Dad Sonny Corinthos (Maurice Bernard) took in. Poor Dev will freak out and think that he’s in automatic danger of deportation, but Joss will assure him that her Dad isn’t like that and certainly wouldn’t do that to him.

Of course Jax’s beef isn’t with Dev Cerci, it’s with Sonny himself, and he won’t waste an opportunity to rip into him about it. He’ll corner Sonny and tell him that he doesn’t like the fact that Joss was put in a position of lying and he’ll tell Sonny that it’s obvious he hasn’t changed one bit, but Sonny will defend his decision and tell Jax that Dev is harmless.

Poor Mama Carly Corinthos (Laura Wright) will have a terrifying nightmare about her newborn, little Donna Corinthos (Ella and Emma Hulen). Her internalized fears will come howling at the door for her. It’s only natural that a Mom would have those kinds of fears after giving birth to a child that may or may not be considered special needs in the future. Those fears may be compounded by the fact that baby Donna can’t be with Carly right now, she’s got to spend a few weeks in the NICU before they can bond properly. Fortunately, it’s just a dream and Carly will wake up and realize that little Donna is just fine and that she will be okay. But are they truly out of the woods yet? Stay tuned!!!