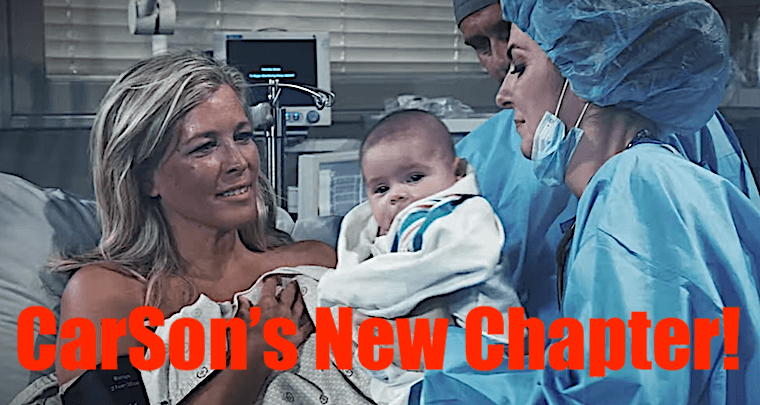 ‘General Hospital’ (GH) spoilers tease that Carly Corinthos (Laura Wright) and Sonny Corinthos (Maurice Benard) are about to deal with a new chapter in their life. And yes, they are both as scared as you would expect them to be. In a recent teaser promo, the blonde beauty was shown in tears as she was about to prematurely give birth to her child. Both Carly and Sonny Corinthos (Maurice Benard) already know that the baby will have special needs as an ultrasound detected that the child be born with spina bifida. Now that the baby was born and succesfully went through surgery, here’s what you need to know.

‘General Hospital’ Spoilers: Tearful Carly Corinthos Scared For Her Baby, Jason Morgan By Her Side

Carly didn’t expect that her child would be born this early. As if she doesn’t have enough things to worry about in her life, ‘General Hospital’ spoilers indicate that she will be hit with early contractions. Fortunately her best friend Jason Morgan (Steve Burton) is there to help her at home. Many ‘General Hospital’ fans would agree that whenever Carly is in trouble, it appears as though Jason is always there for her, and not Sonny. This time around it’s no different.

Carly was rushed to the hospital for an emergency C-section. Jason would remain by her side throughout the entire ordeal. Sonny, meanwhile, arrived at the very last minute at the Hospital last week. Thankfully, he was as calm and collected as always as he told Carly that they were going to get through this together. What’s more, he also told her that she looked as beautiful as ever right before she was about to give birth to their baby.

While this is supposed to be a happy and joyous occasion for all, Carly Corinthos and Sonny were left worried and scared about what might have happened next for their baby. ‘General Hospital’ spoilers say that the child will survive after the surgery was succesful, but there will be plenty of complications that the new parents will have to deal with in the upcoming weeks.

‘Young and the Restless’ Spoilers: Matriarch Takes Bull By the Horns – Nikki Steps In As Victor Ruins Family & Business, Knocks Sense Into Moustache!