‘Days of Our Lives’ Spoilers: Salem’s Dr. God Unveiled – Just Who Exactly Is Wilhelm Rolf? Here’s What You Need To Know! 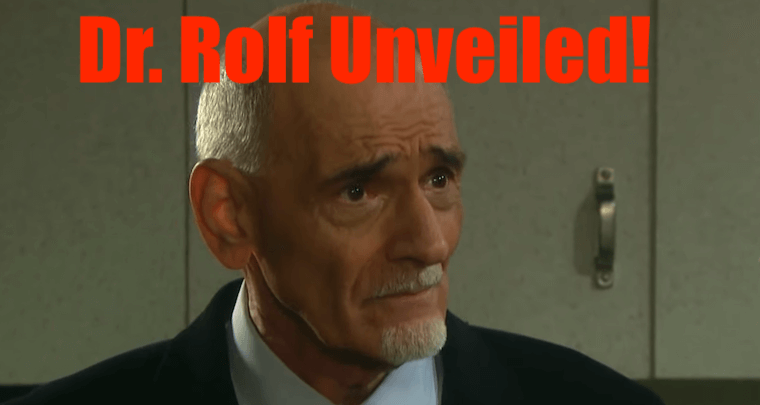 ‘Days of Our Lives’ Spoilers: Is Dr. Rolf a Supreme Being?

‘Days of Our Lives’ (DOOL) Spoilers finds that Dr. Wilhelm Rolf (William Utay) has accomplished a lot in his tenure at Salem, including but not limited to bringing Stefano DiMera (Joseph Moscolo) and his progeny and people related to him back to life dozens of times. No other doctors in Salem have ever really accomplished this feat, in fact in comparison a lot of what Salem’s doctors seem to be doing is child’s play. Not saying that Salem’s doctors aren’t professionals and that they don’t accomplish great things, they do, but none of them seem to have quite the know-how that this guy does, and it makes one wonder, what sets Dr. Rolf apart from any other doctor in the field? Let’s take a look at his history, shall we?

‘Days of Our Lives’ Spoilers: History with Stefano

When we first met Dr. Rolf way back in 1997 (yeah it’s been that long, peeps) he was just one of Stefano DiMera‘s henchmen. We really didn’t think he’d become that important to the plot. Of course Stefano needed a Doctor/Mad Scientist henchmen because at the time they were all in the jungle and he probably needed someone who knew enough about toxins and anti-toxins to save him from all the creepy crawlies that he was going to run into, mostly of the animal variety, after all, Stefano didn’t really strike one as an outdoors-y type. But Rolf could also fell a human quite deftly as well, so he came in handy.

‘Days of Our Lives’ Spoilers: Just where did he come from?

Now this backstory doesn’t necessarily point to the theory that Dr. Rolf is a supreme being, but if Stefano DiMera were indeed going to come after his enemies and try to do his best to take over Salem, then… what better way to do that than by employing a Supreme Being? Also, we don’t really know where Dr. Rolf came from. From his accent one can assume ‘somewhere in Germany’, but do we know where exactly? Where did he get his credentials? Does he have lots of medical diplomas? Where did he go to undergrad? How did Stefano meet him? Were they drinking buddies or frat roommates or what?Okay, that last bit is obviously me just kidding around. I’m thinking that Dr. Rolf, at one time, saved Stefano from certain death and Stefano admired his work so much that he kept him in his employ and Dr. Rolf liked the money and opportunity that being involved with a super-villain got him. But that still doesn’t answer the question of where he came from.

‘Days of Our Lives’ Spoilers: Coming back from the dead himself

From 19997-2003, Dr. Rolf was heavily involved the anything to do with the DiMeras, however in 2003 all good things came to an end when a crate fell on him. Yeah, we thought it was curtains for the good doctor and then, in 2007 he showed up again with no explanation as a hospital employee who tried to poison Sami Brady (Alison Sweeney) now I’m pretty sure that warranted some double-takes and a few exclaimations of “WHAT?!”across the board because we all thought this guy was dead, right? So how does a guy get squished by a crate and show up unharmed and with all of his faculties roughly four years later? That’s the kind of mind-boggling evidence I’m talking about. There was also Abby’s confusing dream back in 2017 where Rolf revived a bunch of people but when Abby woke up Rolf was a body in the morgue?

‘Days of Our Lives’ Spoilers: Doctor’s save lives every day, but what about this track record?

In the past, Dr. Rolf was most famous for being Stefano DiMera’s personal physician and keeping him alive, but the past couple of years he has been infamous for bringing people back from the dead! Some of these people have been in seriously adverse situations too. Like, Vivian Alamain for example, we thought she had died by Kate’s hand but apparently not. Apparently Dr. Rolf got to her in time and injected her with this serum that he has that jump-starts a person’s life force back into being! Just how did he stumble upon this compound? Who was it first used on? And how many tests did it have to go through before he happened upon the final product? These would all be legit questions if he were a legit, human doctor but if the theory is true and Dr Rolf is some kind of supreme being then maybe his methods are more mystical in nature.

‘Days of Our Lives’ Spoilers: Other clues

Recently during the almost Great Embryo Caper engineered by Kristen DiMera (Stacey Haiduk) he had an interesting choice of words when informing Kristen that she was pregnant. First, he told her that he could not perform the procedure but when he told her why, at first she was skeptical and said “But this doesn’t happen for me.” and he said something to the fact of “But you believed” or, “You kept the faith” which is a very… odd conversation for a medical professional to have with a patient. Not saying that it hasn’t happened but for a doctor who’s beliefs are normally very science-based to say that to a patient is kind of out of left-field. Also, when Xander hinted that he would be a perfect candidate to complete Sarah Horton’s abortion he said “Well, don’t look at me, I’m pro-life.” which, again, is a little out of left-field for someone like Rolf.

‘Days of Our Lives’ Spoilers: So what kind of Supreme Being would Dr. Rolf be?

Let’s get something out of the way here, in no way is this article implying that Dr. Rolf is the Supreme Being, rather a Supreme Being. Meaning, he has the mojo but is not quite as all powerful as one would think. After all, if he’d been all powerful then Stefano DiMera would still be alive. There seems to be a limit on his powers, after all, he can only bring someone back to life if he has gotten to them ‘in time’ and as far as I know none of the victims have been cremated or anything. After all, we don’t see him bringing John Black’s long lost Isabella back to life and it looks like Bo Brady and Lexi Carver are gone forever so obviously there are some players in the game that he Is more attached to than others. As for what type of Supreme Being ol’ Rolf is, I would peg him as something like Loki. Meaning, he gets up to a lot of mischief and has a lot of impressive powers but isn’t The Big Kahuna as far as Supreme Beings go.

Again, this is speculation, Dr. Rolf is probably just a genius human but hey… stranger things have happened! So if we really want to know what Dr. Rolf is, I guess we’ll just have to stay tuned!!!

‘Bold and the Beautiful’ Spoilers: Heather Tom (Katie Logan) Takes Her Talents Behind the Screen, Venturing Into Directing!

‘Young and the Restless’ Spoilers: Matriarch Takes Bull By the Horns – Nikki Steps In As Victor Ruins Family & Business, Knocks Sense Into Moustache!

NBC ‘Days Of Our Lives’ Spoilers: Bo Brady – Can We Get A Recast Up…