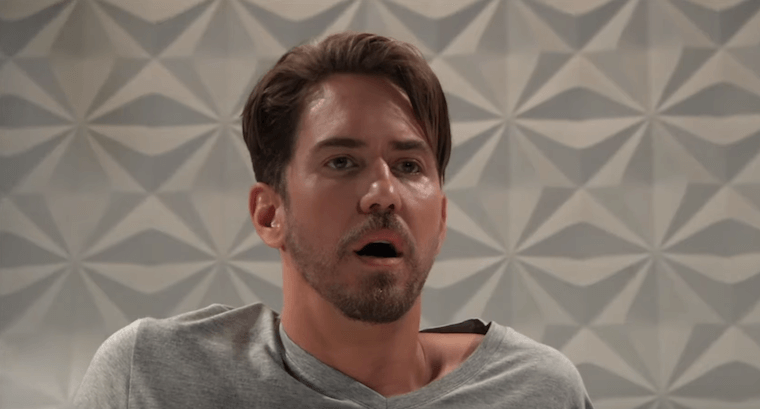 ‘General Hospital’ (GH) spoilers reveals that there is a hitch in Julian Jerome and Kim Nero’s (William DeVry and Tamara Braun) plan, Cameron Webber (William Lipton) is up in arms, and Andre Maddox (Anthony Montgomery) is in a bad state. There’s also some concern for Mac Scorpio’s (John J. York) new job. If you missed it, let’s get to today’s ‘General Hospital’ recap.

Maxie Jones (Kirsten Storms), Felicia Scorpio (Kristina Wagner), Peter August (Wes Ramsey) and Robert Scorpio (Tristan Rogers) are all gathered to celebrate Mac’s new job. Maxie has a problem, though. Like this is new, right? She does (as usual) have good intent here, though. She’s worried about his new position and whether it requires him being in danger.

He assures her it’s basically a desk job, but Maxie knows their family. They tend to get mixed up in things, so she wants him to promise that every time he heads to work, he keeps his family in mind. The celebration is eventually interrupted by a work-related call, so Mac has to excuse himself. Felicia snarks, “And so it begins” before he leaves.

Before Peter (and eventually Maxie) leave, the topic of Maxie moving up in the publishing world comes up. She’s intrigued by the idea, but she can’t really take an offer right now. When Felicia wants to know why not, Maxie points out that she’s currently running the show at Crimson.

As long as Sasha Gilmore (Sofia Mattsson) is getting all of Nina Reeves’ (Cynthia Watros) focus, she can’t leave. No one else there is experienced enough to do it. Before Maxie has to go back to work, she promises to keep her options open when things slow down.

Peter left the gathering before Maxie, something that earned a wisecrack from Robert about getting some alien exclusive for his rag. Felicia has not been blind to this, and she ain’t happy. With her and Robert now alone, she confronts him about his attitude.

After making sure Robert doesn’t have some concrete dirt on the guy, she insists he needs back off Peter unless he actually has a legit reason (outside of his parentage) to be digging.

He may yet get it. Andre had been caught on camera dragging himself into the hospital, where he is now in very serious condition. He’s got a couple of stab wounds, which was what Mac got the call about. Jordan Ashford (Brianna Nicole Henry) is investigating.

‘General Hospital’ spoilers: How low will he go?

How does this relate? Well, there were some episode preemptions in some areas, so it’s unclear at this moment what part Peter may or may not have had in this whole thing. What is known is, Peter has learned Andre is there and we see Peter entering his room as the episode ends.

Cameron is furious when he and Trina Robinson (Sydney Mikayla) overhear Franco Baldwin (Roger Howarth) coming onto Kim. He’s quite insistent and she does give in a moment to a kiss, but she’s soon reaming him out over the fact he is biologically Franco and that means he’s walking out on a family right now. She’s very upset by all of this and eventually takes off.

Cam then comes out of hiding and confronts Franco. He goes on about everything Elizabeth Webber (Rebecca Herbst) risked standing by him, as well as how much his family needs him back. Franco isn’t quite moved, as he says he would be cruel to pretend to there’s a chance of having that old life back. Cam is so upset, he tells Franco he’s glad Oscar Nero (Garren Stitt) is dead. He would never want to see the kind of guy “Drew” is now.

Elizabeth is discouraged to learn that Jason Morgan (Steve Burton) spoke to “Franco” and believes that there is very little chance of getting through to him. During their talk, they argue a bit about how this must be like Christmas for him, as he never liked Franco anyway and hated his place in Elizabeth and the boys’ lives.

He doesn’t exactly argue with this, but he is sympathetic to what she’s dealing with. Now that Jason’s been honest about his assessment of what’s going on with Franco, Elizabeth now knows her plan to commit Franco is her only hope.

Julian and Kim both learn today that there will be a week’s delay in getting the Charlie’s Pub sale finalized. Olivia Quartermaine’s (Lisa LoCicero) decided to handle the purchase differently for tax reasons.

When Alexis Davis (Nancy Lee Grahn) breaks the news to Kim, she offers to give free legal advice for keeping Franco away from her, as Julian mentioned having “Drew” around was hard on her. Kim declines her help and says the move will happen when it happens, but Alexis is clearly a little concerned.

Given the money he’ll be making, Julian has put together a trust fund for Wiley as a parting gift before they leave. Lucas Jones (Ryan Carnes) is grateful, but reminds Julian that a connection with him is more important than money.

‘Young and the Restless’ Spoilers: Vengeful Adam Takes It Too Far!