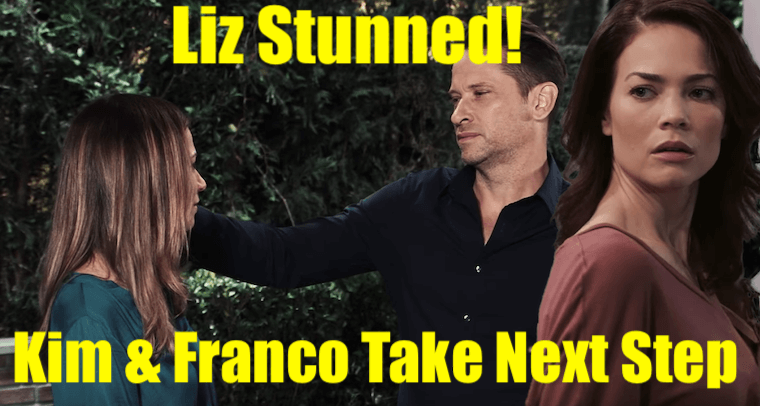 General Hospital spoilers indicate that Elizabeth Webber (Rebecca Herbst) plans on doing whatever she can to keep her family intact. As a matter of fact, she’s determined to get Franco Baldwin (Roger Howarth) back no matter what it takes. Meanwhile, Kim Nero (Tamara Braun) admits that she does want to explore a future with Franco, who honestly thinks that he is Drew Cain. Here’s what you need to know.

Liz knows that something is up between Franco and Kim but it’s not until Cameron Webber (Wlliam Lipton) sees the two getting rather up close and personal that he does something about it. Clearly, Franco now honestly believes that he is Drew Cain. And because he thinks he is Drew, he can’t help but feel attached – both emotionally and physically – to Kim Nero.

Kim, meanwhile, is feeling pretty lost herself. Ever since her son Oscar Nero (Garren Stint) passed away her grief has taken over her life. She desperately wants to hang on to his memory and everything they had before his short life was taken away. Of course, getting close to Franco is one way to do it. She’s intrigued by Franco and what he has to offer by being Drew. As a matter of fact, a new General Hospital teaser trailer shows Liz telling Jason Morgan (Steve Burton) that she thinks Kim has feelings for her husband.

So, what does a woman like Liz supposed to do when her best friend is getting a little too close to her husband? Fight back, of course! Sure, this might be a very emotional and sensitive situation but there’s no way that Liz is going to let Kim get in between her and the man that she loves. Of course, fans will have to tune in to see what she will do next!

‘Young and the Restless’ Spoilers, Tuesday September 3: Jabot Cosmetics Has a New CEO!