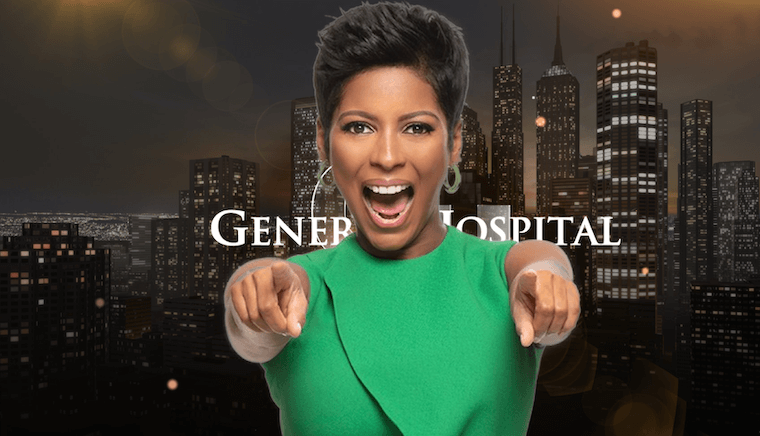 ‘General Hospital’ (GH) Spoilers for September 13th, 2019 indicate that Tamron Hall will show up in Port Charles as part of a project for Crimson! She’ll be in scenes with Maxie Jones (Kirsten Storms) and Jasper Jacks (Ingo Rademacher). It’ll be a real treat for the fans of her daytime show to see her branch out. No word on what this new project for Crimson is but if it’s Crimson related then we can expect something fun from that. Tamron Hall hosts the popular Tamron Hall Show.

Meanwhile, Liesl Olbrecht (Kathleen Gati) will be sick with the hangover from hell after Julian Jerome (William deVry) spiked her drink in order to get her three sheets to the wind so that he could kill her. However, the former mob boss didn’t end up going through with it much to the chagrin of Bradley Cooper (Parry Shen) he is convinced that the only way to get Liesl out of their hair is to kill her. (Geeze, Brad, did you ever try.. oh I don’t know.. money, as a bribe?)

Poor Liesl will be in so much pain that she’s wearing sunglasses to block out the light, but she’ll have to lower the sunglasses at one point to talk with someone. She’ll also realize that she’s being targeted, so they will think they have no other option but to finish the job. However target or not, she’ll still try to intimidate Brad.

‘General Hospital’ Spoilers: Modeling is great but I have a confession to make

Lucy Coe (Lynn Herring) will want Sasha Gilmore (Sofia Mattson) to get into modeling and will rave about how she could change her life. Sasha however is only half-listening because she’s more worried about what on earth she’s going to tell Michael Corinthos (Chad Duell).

She had previously planned to confess to him about being Nina Reeves (Cynthia Watros) fake daughter but will she actually go through with it? Looks like she’ll begin to confess, but will she actually get the sentence out of her mouth? Or maybe she’ll get interrupted, or tell him something else instead. Maybe she’ll just say that she’s accepted Lucy’s offer of being a model instead? Oy. Looks like we’ll have to play the waiting game!

Lulu Falconeri (Emme Rylan) isn’t quite ready to move on from Dante Falconeri (Dominic Zamprogna) yet, but that won’t keep Dustin Phillips (Mark Lawson) from being absolutely enamored of her. He’ll tell her that he can’t get her off his mind and that will definitely give her a thrill. Sure, it’s going to take awhile and getting over Dante will definitely be a process, but it may happen sooner rather than later.

‘General Hospital’ Spoilers: Peter will do anything for love

It would seem that Peter August (Wes Ramsey) will find himself identifying more and more with Valentin Cassadine (James Patrick Stuart), these days. It seems that Valentin will do anything to be with Nina. Peter realizes that he would probably do the same to be with Maxie, so he’ll drop a few brohints to Valentin that he understands.

Meanwhile, Curtis Ashford (Donnell Turner) will really be pumping Laura Webber (Genie Francis) for information on Helena Cassadine (Constance Towers), every little bit helps according to him and Laura will gladly oblige but things will get real when they actually go poking around. It seems that their search will lead them to the Haunted Star where they will find a room with something in it that will knock their socks off! What could that be? Stay tuned!