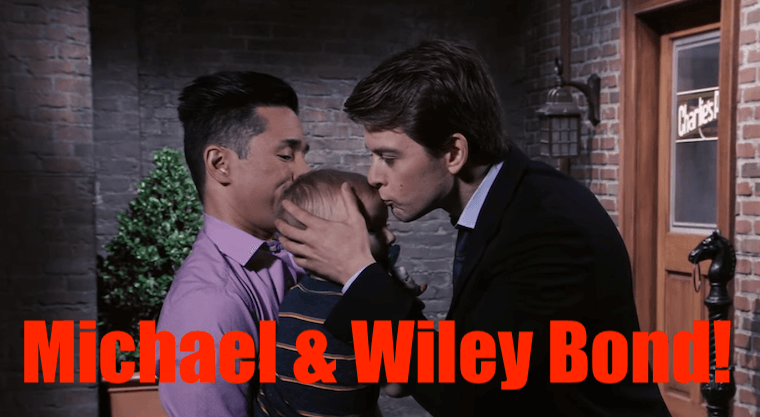 ‘General Hospital’ (GH) Spoilers for Monday, September 9th, 2019 indicate that poor Scott Baldwin (Kin Shriner) will seek out Sonny Corinthos (Maurice Bernard) in a desperate move to keep Franco Baldwin (Roger Howarth) from skipping town. As soon as the ankle monitor comes off, that’s it, Franco’s out of the picture, he’s gone, he wants to leave town. But Scotty doesn’t want that to happen so he’ll employ (and probably implore) Sonny to help him out in a risky plot that will keep Franco in Port Charles – for now.

But Scotty isn’t the only one torn up over Franco. Wife Elizabeth Webber (Rebecca Herbst) will be climbing the walls too! So much so that she’ll drop by Dr. Andrew Maddox’s (Anthony Montgomery) to ask him how goes the recovery and how soon he can get her hubby back for her. Thing is, Dr. Maddox can’t make any real promises at this point, he can only promise that he will do what he can.

Liz won’t be the only one paying a visit to Dr. Maddox, looks like Monica Quartermaine (Leslie Charleson) will be stopping by as well. She’ll be going over his vitals and making sure that things look kosher. He’ll tell her that he’s trying to improve his karma by turning over a new leaf and helping Franco get his memory back.

Monica understands where he’s coming from, but she doesn’t want Drew Cain (Billy Miller) to be gone from existence before she can talk to him herself and hear about his memories. So that means she will track him down and get all the details about the life that he does remember. For once, he’ll be glad that someone embraces him as Drew and not Franco.

‘General Hospital’ Spoilers: Sonny makes Julian an offer. Will Julian go back to murder for hire?

Looks like Sonny is in the mood for cutting deals with the competition. He’ll arrive at Charlie’s pub to talk some things over with Julian Jerome (William deVry). As it turns out, Julian has something that Sonny wants, and Sonny is willing to pay a pretty penny for it. This is enough to leave Bradley Cooper (Parry Shen) plenty unsettled.

Especially with the information that Dr. Liesl Olbrecht (Kathleen Gati) has hanging over him. He’ll let Julian know about what she knows and then he’ll finally tell Julian the most condemning confession of all – he will tell him of baby Wiley Cooper-Jones’ true parentage. Julian will rage that he has put all their lives in danger and Brad will urge Julian to score one last hit and kill Liesl so that the secret dies with her and all their lives will be spared. No word on whether he actually does it or not yet.

Michael Corinthos will pay baby Wiley Cooper-Jones a visit. While visiting he will be approached by Willow Tait (Katelyn MacMullen) who will make a confession to him, nothing big though! Just something silly and lighthearted that the two can share a little laugh about. Michael will also make some observations about some things, but I wonder what they will end up being. Could it be that he notices the family resemblance?

Jason Morgan (Steve Burton) will think that there is way more connected to Dr. Maddox’s stabbing and Drew’s missing plane than meets the eye. He’ll be determined to find out the truth behind it all and who’s responsible. Especially after his conversation with Sam McCall (Kelly Monaco). Maybe he’ll be so engrossed in finding the truth that that’s how he ends up losing sleep?

Speaking of losing sleep, it won’t come easy for Curtis Ashford (Donnell Turner) either in the upcoming days. Drew was his pal and now he’s just vanished? That’ll be hard for him to accept but according to police commissioner Jordan Ashford (Briana Nicole Henry) its something he’ll have to do because Drew was the only passenger aboard that flight and it looks like he was a target – but for who though? Stay tuned!!!