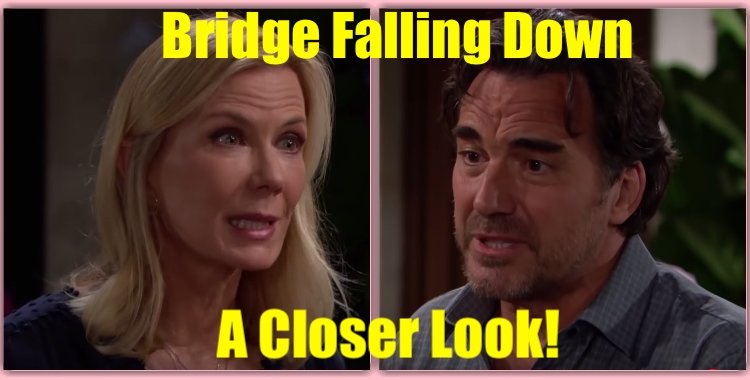 ‘Bold and the Beautiful’ Spoilers: ‘Bridge’ Is Falling Down – A Closer Look At Brooke and Ridge’s Breakdown!

‘Bold and Beautiful’ Spoilers: ‘Bridge’ is falling down – a closer look!

‘Bold and Beautiful’ (B&B) Spoilers find that just when you thought it was safe to believe in love and romance, and that some soap opera love did last forever and that some of the older characters had finally gotten over their cheatin’ ways and would remain together for their golden years and it would just be smooth sailing from here on out – Ridge Forrester (Thorsten Kaye) happens.

All seemed to be going well in Marriedsville for the Forresters, neither Brooke Logan (Katherine Kelly Lang) nor Ridge had any past lovers or secret children coming out of the woodwork to destroy them, both were pretty content with the day-to-day life that they shared together, and then BAM! Shauna Fulton (Denise Richards) enters the picture and just like that, Ridge’s head is turned.

‘Bold and Beautiful’ Spoilers: So what went wrong?

You could say that it’s been a slow burn, the trouble between Ridge and Brooke that’s been been brewing. It started when Thomas Forrester (Matthew Atkinson) started trying to woo Brooke’s daughter, Hope Logan (Annika Noelle) right after her marriage to Liam Spencer (Scott Clifton) was annulled. Brooke was highly suspicious of Thomas because of how heavily he pursued Hope.

To be fair, any good Mom would have been suspicious of this simply because of the way Thomas went about things. He was controlling and kind of creepy, and all too keen on sealing the deal (AKA: Getting Hope into bed) rather than just letting her be a stand-in Mom figure to Douglas Forrester (Henry Joseph Samiri) or even taking the time to really fall in love with her. He was acting selfishly, and Brooke could sense it a mile away. Ridge however, chose to put blinders on.

Brooke made no attempt to hide her saltiness over Hope and Thomas’s relationship and subsequent nuptials. She did not think that they should be together, period. Ridge however took a decidedly more hands-off approach. He did not think that they should meddle in their kids’ lives like his own Mother, Stephanie Forrester (Susan Flannery) used to do.

But was that really the thing to do? Was he really that blind to Thomas’s toxic ways? Because if he honestly thought that his son was dealing with things fine on his own and wouldn’t benefit from an intervention, that was one thing. But I think we all know that Ridge is a bit more intuitive than that. It seems, in this instance, that Ridge was just in a comfortable place in his life and didn’t want to deal with whatever issues Thomas had, in other words, he had gotten lazy.

‘Bold and Beautiful’ Spoilers: The straw that broke the camel’s back – Brooke Pushed Thomas Off the Cliff!

Definitely, the straw that broke the camel’s back in Brooke and Ridge’s relationship was when she tossed Thomas off the cliff. Things were strained before then, but that was the breaking point. After that, Ridge could no longer ignore that his son was having issues – issues that almost got him killed and orphaned his Grandson and totally disrupted his nice, comfortable, day-to-day life with Brooke.

With Thomas’s accident (because we all agree that Brooke did not mean to hurt Thomas, she was just defending Hope), he could no longer ignore the things that he had been used to ignoring and that really ticked him off.

It was the perfect storm. He was already mad and hurt at Brooke over her pushing Thomas off the cliff and leaving his son injured (well, initially, he seems to be okay and pretty cognizant now), he had just had to make nice with a police detective to keep his son out of jail and then immediately face the wrath of Brooke afterwards. Shauna couldn’t have come at a better time because unlike everyone else, Shauna is going to tell Ridge exactly what he wants to hear.

Right now, Ridge wants to hear that he’s done the best he can by his family (Thomas) and that someone can certainly understand where he would take his child’s side over everyone else. I mean, after all, that’s what Shauna did. In spite of the wrong that Flo committed, she’s still standing by her. So of course finding someone that can identify and possibly be on his side through this horrible mess is a godsend to Ridge… but… is it, really?

I’m going to say that Shauna Fulton is just a temporary distraction. In spite of how bleak it looks right now, I think Brooke and Ridge have far too much history together to break up now. However, that doesn’t mean that she won’t cause problems for the two and maybe it might even escalate into a break-up, who knows? But I think that even with trouble, the two will ultimately find their way back to each other.

Although, how long this ‘distraction’ may last is kind of up in the air. Perhaps, Ridge will temporarily find a kindred spirit in Shauna and begin a fling with her, after all, they have a lot in common right now and both are kind of in the gray area of being the bad guy. Neither one of them agree with their children’s actions but neither one will allow their children to go to prison either.

However, a bond like that can only last for so long. It’s not like Flo and Thomas have been locked up for life, the immunity deal granted them both freedom so nothing has actually changed about their daily lives. Probably, when things get down to the nitty gritty of those two actually being compatible – Ridge will go running back to Brooke and Shauna may go running back to Vegas. But only time will tell, won’t it? Stay tuned!

‘Young and the Restless’ Spoilers: What Happened To Ashley Abbott (Eileen Davidson) On Y&R?

‘Young and the Restless’ Weekly Spoilers September 16-20: Victor Resurrected – The Moustache Lives To Fight Another Day!