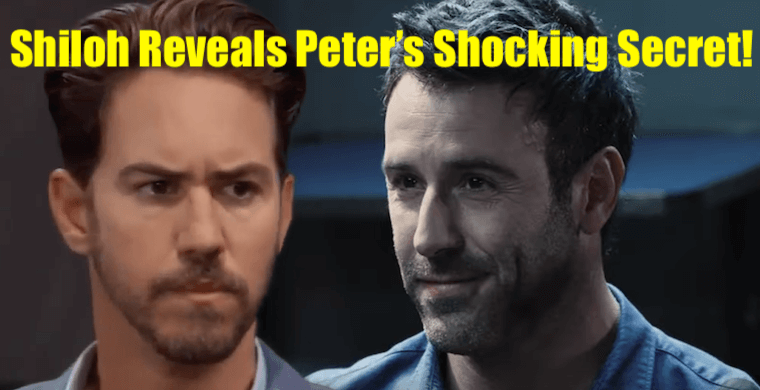 Franco comes across Kim at GH and starts asking questions about Oscar Nero (Garren Stitt). Kim’s not having it, and tells him that this is really not okay. She just lost her son a few months ago and now he’s making her relive this all. Franco’s apologetic and knows his pain isn’t close to hers, but he never got a chance to know his kid. Kim shoots back he never gave them that chance. She corrects herself and says Drew Cain (Billy Miller) never tried to get in touch with her, and she was never able to get to him because he was on a sensitive mission.

Franco surprises her by saying that “he” wrote to her every single month, realizing they were stupid to call off their relationship because of his deployment. He just assumed she didn’t want anything to do with him, but Kim says she never got any letters. She’s starting to talk to him like he’s really Drew. Franco swears he would’ve done anything to get back to her and their son if he knew about him, then suggests they go somewhere private to talk. Kim doesn’t think that’s wise and takes off.

Meanwhile, Elizabeth and Drew are talking about the latest in the Franco situation. He has learned that Shiloh’s (Coby Ryan McLaughlin) motivation for the memory swap was learning where a ton of money he and a corrupt SEAL hid. Franco had told Drew it was in the guy’s wife’s car, which just happens to be the same type of car Drew bought for Oscar.

Elizabeth is stunned and thinks it can’t be the same car, as that’s too coincidental. He says he doesn’t believe it is coincidence. He thinks the instinct that led him to purchase that car was a flash of memory, something he gets from time to time. Elizabeth is encouraged and wonders if Franco has, or will have, flashes like that to lead him back to his old life.

Speaking of said car, it’s obviously now in Cameron’s possession, and Cameron wants no part of it. That car was the main reason that this whole Franco situation was able to happen, not to mention the crappy trip to Niagra Falls. He wants to sell and has already lined up a potential buyer. Trina Robinson (Sydney Mikayla) thinks he’s being silly and counters a lot of good stuff happened on that trip. Like them becoming friends. She thinks there’s no way a car can be cursed, and that Oscar wanted him to have it.

When the buyer arrives, Trina and Cameron go back and forth with the poor confused buyer.

It only gets worse once Drew arrives and refuses to allow the car to be sold. He sends the annoyed buyer away, then says there might be something in that car that’s important. Cameron thinks that’s impossible, but Drew manages to find a hidden package filled with cash.

Also today, Dev Cerci (Ashton Arbab) is accused of stealing money from Corinthos Coffee by the foreman. Sonny arrives and wants to know what the problem is. After it’s explained, he says it’s easy enough to solve—just search the kid.
Eventually, money is found in Dev’s jacket, and Dev continues to swear he didn’t steal anything. Sonny’s inclined to believe him. The missing cash was ten thousand dollars, but only seven thousand was in the jacket.

Eventually it’s discovered that the foreman was the culprit. He didn’t like Dev, or the mistakes he’s already made and wanted him gone. He figured he’d get a little extra cash out of the deal as well.

Sonny is surprisingly generous and allows the guy to keep the entire 10K after firing him. He does, however, advise the guy to move to the other coast.
Later, Sonny explains there were already questions about the guy, and Sonny knew Dev wouldn’t have tried something like that with Jason Morgan (Steve Burton) right there. He asks Jason to handle things with the former employee from here.

Lulu Falconeri (Emme Rylan) is officially divorced and Maxie Jones (Kirsten Storms) is here to help her cope. To that end, she agrees to go to an event Lulu has to cover, and suggests that Lulu spend a little time with her hot rideshare guy (Dustin Phillips, played by Mark Lawson). Lulu is resistant to that idea, but Maxie uses the contact info she sent to herself after demanding Lulu’s phone to arrange a ride.

Finally, we learn that Peter was actually involved in Drew’s memory being taken. He was partnered with Helena Cassadine (Constance Towers) at the time. Shiloh knows this because he decided to stick around unseen after he dropped Drew off. He saw everything, but Peter thinks no one is going to believe him. Shiloh disagrees, due to Peter’s questionable past. Right. Because Shiloh the kidnapper/sexual predator/blackmailer/cult leader is so believable…