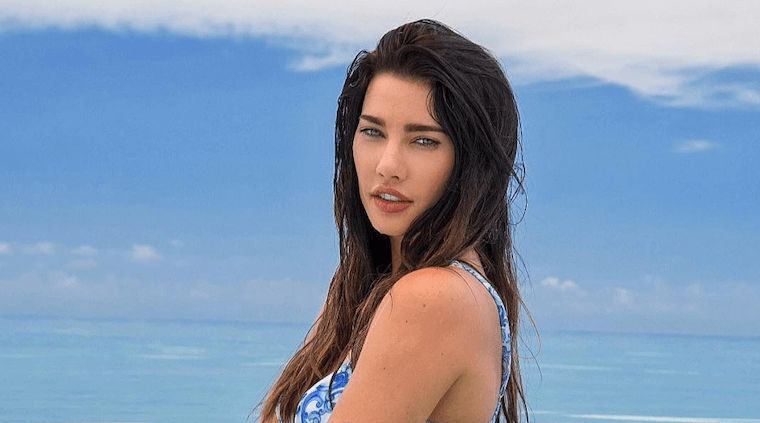 ‘Bold and the Beautiful’ (B&B) spoilers indicate that star Jacqueline MacInnes Wood (Steffy Forrester) might be one of the biggest stars of the daytime television world, but even she is hit with some challenges when she’s in front of the cameras. As a matter of fact, the brunette beauty recently opened up about how she had a hard time covering her baby bump while she was eight months pregnant and filming her scenes.

Jacqueline opened up to Soap Opera Digest and says that she thought filming while pregnant would be a breeze. Little did she know that her growing baby bump was actually getting in the way during some of the scenes. Thankfully, the rest of the cast and the crew were willing to accommodate her.

“Once I told them I was pregnant, I truly thought, ‘Oh, this is going be a walk in the park now. I’m going be sitting behind a desk for the next five months and it will be easy,’ ” she told the publication. “Well, I couldn’t have been more wrong.”

Jacqueline then goes on to describe one scene in which they had to do a re shoot because of her pregnancy. She recalls, “I remember one scene, I was probably eight months pregnant, and I had these high heels on and had this monologue as I’m walking into the room. I was holding design boards to hide my stomach and we’d hear, ‘Cut. We saw your bump. Hold on. Do it again.’ There were so many hands-on things I never thought I would be doing. It was challenging because we shoot so quickly, and we already have so much dialogue as it is. But, they did a great job hiding it and I was impressed while I was watching the show. They made it work.”

‘Young and the Restless’ Spoilers: Billy’s Terrifying Downward Spiral, No Stop In Sight – Where Does It Lead?

‘Young and the Restless’ Spoilers: Theo Loses Interest In Summer, Sets Sights On Her Mother Phyllis!