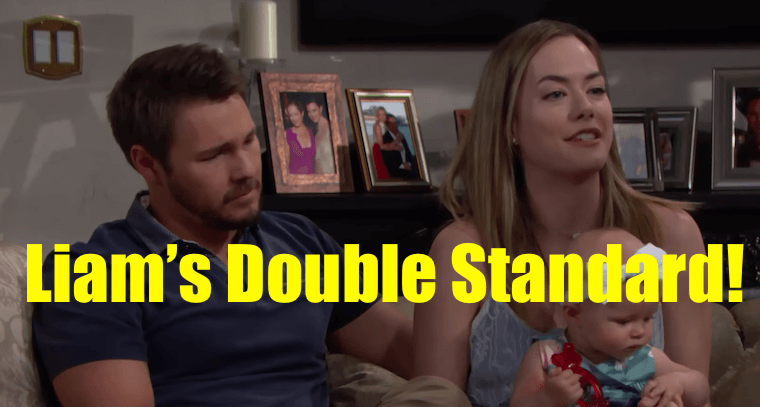 ‘Bold and Beautiful’ (B&B) spoilers is asking if anyone notice something when Hope Logan (Annika Noelle) and Liam Spencer (Scott Clifton) were professing their undying love for each other on B&B right after they got baby Beth (River Davidson and Madeline Valdez) back? As we all know that ever since like, 5 seconds after the annullment with Hope, Liam has been with Steffy Forrester. (Jacqueline Macinnes Wood) And not just in the co-parenting way. Liam and Steffy were physically intimate with one another. The first time could be attributed to Thomas Forrester (Matthew Atkinson) and his creepy way of doing things, which included slipping Liam a mickey.

Hope found out about this discretion like, the moment after it happened and of course even though she had had the marriage annulled, she was heartbroken! But… since she was the one who had instigated the annullment, she was expected to handle the news of Liam having moved on like an adult. When she expressed concern over him moving onto Steffy so quickly she was constantly shut down and it seemed like everyone was quick to paint her as a jealous ex. However, the other day when she and Liam were discussing her recent marriage to Thomas, did you notice just how uncomfortable he got when it was even hinted at that she may have been physically intimate with Thomas?

Did you see the almost visible wince? The look on his face? The blanche? Yes, I’m talking about the blanchening of Liam’s face as Hope talked about the remote possibility of having been intimate with Thomas. Yet, he expected Hope to react with the utmost detached maturity when the same thing happened with Steffy? I’m just going to call that out – that’s a double standard! So, Liam can play around and play the field if the break up, but Hope… can’t? It’s 2019, Liam needs to get over it.

The Bold and the Beautiful Spoilers: Trouble Ahead For Lope?

That doesn’t diminish the fact that I like Liam as a character but the double standard was a bit problematic. It’s not like Liam married Steffy right off the bat, he just hooked up with her. But it was so much worse for him because Hope was legitimately married, to Thomas… and yet… he somehow thought that they weren’t going to be together?

I’m so happy for his sake that Hope ultimately decided that she couldn’t go through with such an act because if she had I could see Liam being a bit of a whiner about it. Did he expect her to wait for him when he hadn’t done any waiting for her? If he hadn’t hooked up with Steffy I could see that, but the way things played out, it just seemed a bit unfair that Liam would expect that out of Hope. Fortunately for the S.S. Lope, nothing happened on the Thope front, in fact that ship was dead in the water before it even set sail. Still… what would Liam’s reaction have been if Hope had been intimate with Thomas? And would that have done in their marriage for good? I guess all’s well that ends well on that front but we’ll have to stay tuned!!!

‘Young and the Restless’ Spoilers: Billy’s Terrifying Downward Spiral, No Stop In Sight – Where Does It Lead?