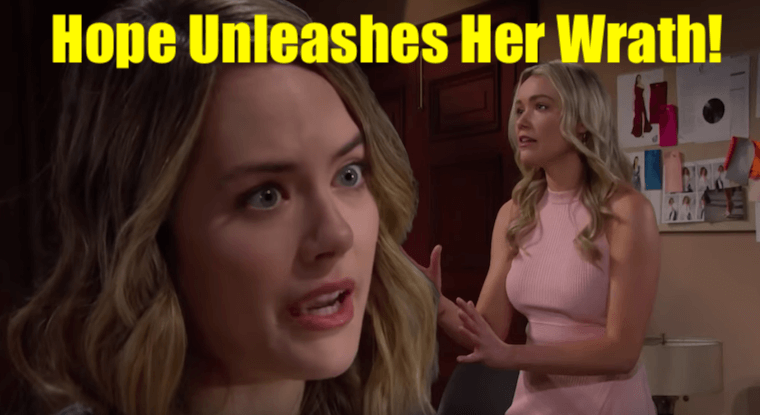 ‘Bold and the Beautiful’ Spoilers: Flo and Shauna do damage control

‘Bold and the Beautiful’ (B&B) Spoilers for Friday, August 16 indicate that Both Flo Fulton (Katrina Bowden) and Shauna Fulton (Denise Richards) really hate that they’ve caused the Logan family such pain and anguish, but they are also ultimately concerned with just how much they’ll be expected to pay in return for all that pain they’ve caused.

Both Ridge Forrester (Thorsten Kate) and Brooke Logan (Katherine Kelly Lang) have promised that they will both pay for the pain they have caused Hope, but they want to lessen the impact as much as possible, so they’ll head over to the cabin to try and make a plea for mercy with Hope Logan. (Annika Noelle) Of course, this doesn’t really happen as Flo has gotten both her baby and her dignity back and she owes these two nothing!

Normally, Hope’s a pretty softhearted gal and she’s easily moved by someone’s emotions – however this time Flo can cry all she likes but Hope ain’t budging! She’ll lambast them for all they’re worth. Then Brooke, Donna Logan (Jennifer Gareis) and Katie Logan (Heather Tom) will show up and the battle will begin in full force! While Hope goes off on Flo, Mama Bear Brooke and her two sisters will take on Shauna and they’ll ream her for her role in keeping baby Beth Spencer (River Davidson and Madeline Valdez) away from Hope as well. Three against one? You could say that it’s not a fair fight, but keeping Hope’s baby away from her for months on end wasn’t fair either so there’s that. These two have worked a pretty long while to get what’s coming to them, you have to admit.

‘Bold and the Beautiful’ Spoilers: Smackdown! Starring Hope and the Logan sisters

So there will be a grand catfight (at least a verbal one) in today’s episode! We’ll finally get to see Hope unleahs her wrath on these more than deserving people! While one could argue that Flo was perhaps maybe a victim of Dr Reese Buckingham (Wayne Brady) in her own right, she didn’t have to keep silent, and neither did Shauna. So they are totally responsible for their fair share of Hope’s pain. It’ll be nice to see them get called out and not have everyone dance around the issue for once. The only issue I have with this episode is that Zoe isn’t there to take her fair share of Hope’s wrath but hey, maybe that’s upcoming! Stay tuned!!!

‘Days of Our Lives’ Spoilers Friday, August 16: Kristen Busted By Ben and Ciara!