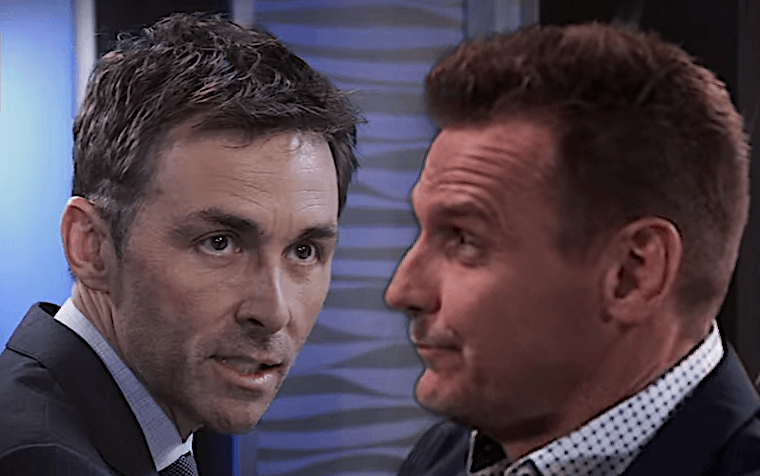 ‘General Hospital’ (GH) spoilers for June 17th, 2019, indicate that Maxie Jones (Kirsten Storms) is planning a surprise for Peter August’s (Wes Ramsey) birthday, however she’ll be freaking out over it and it will take Mac Scorpio to come in and assure her that things will be okay. Jasper ‘Jax’ Jacks (Ingo Rademacher) is causing drama as Valentin is starting to get quite irritated with Jax and Nina’s growing relationship. Here’s what you need to know.

Try as he might, Mac’s attempts will do little to calm Maxie down. Case in point, they have a whole misunderstanding about cake and pie. Peter orders pie, and Maxie will wonder why he didn’t order cake instead and thinks that he doesn’t like cake.

Peter says he likes cake, but he likes pie just a bit more and Maxie will grumble that she wishes he had told her this. When he asks if she’s okay, she’ll assure him that yes, she is but we all know that no, she isn’t. She’ll still be freaking out about the birthday surprise. Geeze Maxie!

Laura tells Max that while Jordan recovers, she will need an interim police commissioner and that he’s the one she has in mind for the job. Someone who will be invested enough to do a good job, but not invested enough to take Jordan’s job away from her once she is recovered. Mac is quite stunned by this, but it looks like he will agree to be the commissioner while Jordan gets back on her feet.

Meanwhile, Nina Reeves (now played by Cynthia Watros), will meet with Curtis Ashford, but the meeting doesn’t look to be a social call. Curtis is stressed about medical bills, but Nina tells him that she’ll take care of everything on that end. However Curtis rejects that offer.

That won’t be the only rejection on the table today at GH. Valentin, motivated by jealousy, will offer to buy out Jax’s half of Aurora Media. However, Jax is not interested. He knows he’s got competition in the Nina department and it’s not something he’ll mind one bit. He believe he’s the better man when it comes to Nina. However ultimately, that choice is all up to one person, and that is Nina herself. It remains to be seen who she will choose, her fiance Valentin, or the new guy that has just started vying for her attention—Jax.

Jordan is having some internal conflict over stealing Ryan’s kidney, but ultimately she will look the other way. After all, its her life that the kidney saved and Ryan deserved to pay for the things he had done. If saving her life made any kind of amends when it came to taking nine others, then, so be it. She doesn’t like it, but she’ll accept it. She consoles herself with health updates from Dr. Hamilton Finn, in spite of what Ryan’s done she doesn’t actually want his missing kidney to cause him major health problems.

We’ll check in on Dr. Kim Nero (Tamara Braun) only to find that she isn’t doing so good. She’s having an identity crisis. For so long she was Oscar Nero’s (Garren Stitt) Mom, and without her child, she doesn’t really know who she is anymore. Julian Jerome (William deVry) will be there for her. He will assure her that no matter what, even if her child isn’t on this earth anymore, that she will never lose the title of Mom. Awww, kudos to Julian for being a good guy in Kim’s time of need.

Meanwhile, Josslyn Jacks () will tell her friends about her wanting to get in contact with Oscar. Trina will be all for this idea, but will Cameron? It looks like Cameron will be reluctant to indulge Joss’s desire to contact Oscar from beyond. But however reluctant he is, it won’t last long because Joss and Trina will be awfully convincing with their argument. Will they use the online ouija board or will the old- fashioned one work just fine? Stay tuned!