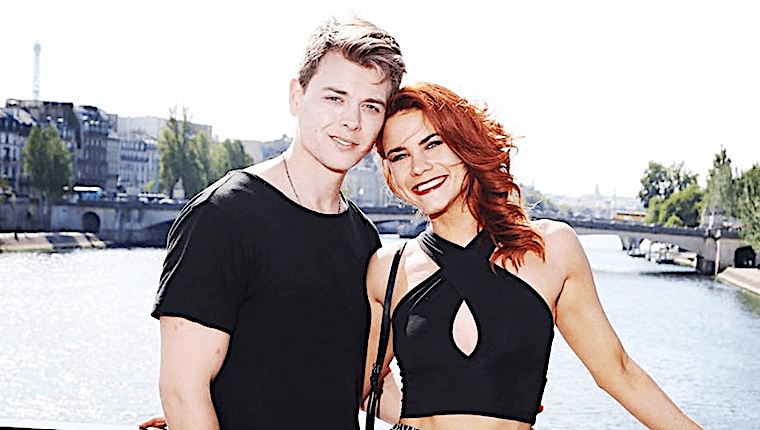 General Hospital star Chad Duell (Michael Cortinhos) and The Bold and the Beautiful star Courtney Hope (Sally Spectra) recently opened up about their romance to Soap Opera Digest. Here are some highlights of what they had to say!

When asked about how they first met, Chad said, “We had a mutual friend that had a premiere for his new TV show at his manager’s house. Bryan Craig [ex-Morgan, GH] was there, too.”

Courtney added, “ I wasn’t even going to go! I had been working all day and I was really tired. My mom convinced me to go and I’m glad she did because I don’t think I would’ve met him otherwise! I knew Bryan, but I hadn’t seen him in a while, and I said to him, “I’m testing for your show.” And he said, “Oh, that’s cool. Actually, there’s someone else from my show here. He plays my brother,” and he pointed at Chad. That’s how we got to talking.”

Believe it or not, Courtney was also testing for Michael Corinthos’ love interest on General Hospital. That’s when Chad decided to give her a little advice. He explained, “The cool thing was, we mostly just talked about regular things, like about the fruit trees I was planting in my backyard. It was a Hollywood party and we were talking about real stuff. That’s not normal!”

Courtney said that the other people they were with wanted to go to a club, but she and Chad aren’t much into the club scene. She added, “We both kind of looked at each other like, “Well, if you’re going, I’ll go.” So we ended up going to a club, but we just sat in the back and talked the whole time. We were going to get each other’s numbers by the end of the night, but our friends kind of pulled us in different directions. I ended up Facebook-ing him later and said, “It was really nice to meet you.” So I reached out to him.”

The Bold and the Beautiful Spoilers: Rest Is History

And the rest, as they say, is history. These days Chad Duell and Courtney Hope are daytime television’s cutest couple! We have a feeling that we are going to be seeing much more of them both on and off screen in the coming years. We are definitely rooting for them, both professionally and personally speaking.