‘General Hospital’ spoilers Wes Ramsey is opening up about being a daytime television star. The actor, who is best known for his role as Peter August on the show, says that he is grateful for having such a one-of-a-kind opportunity to be on one of the most celebrated series in the industry.

Wes opened up about his love for acting in a new interview with the Digital Journal. The actor says that he feels fortunate to be in the position that he is in right now. After all, General Hospital is a soap classic that has been entertaining fans for several long decades.

"We need to call the 'DOD' a cult." #GH55 pic.twitter.com/JwZCfdSDDH

And while there are as many people out there who loathe Peter August as much as they love him, Wes says that playing the character has definitely been a challenge. But it’s a challenge that he loves to take on every single day he shows up on the Port Charles set.
“I love being able to create characters,” he said. “I have been doing that naturally since I was a kid. I would find a hero figure to emulate when I was young and I would take on that persona in my real life.” 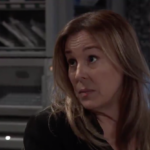 ‘Bold and the Beautiful’ Spoilers: Wishy-Washy Zoe Changes Her Mind About Being A Good Human, Triggers Flo’s Ire – Ship of Thieves Is Sinking