So, is everybody jazzed for Strange Things S4? The trailer did not disappoint. In the latest offering from the Duffer Brothers we see our junior protagonists trying to fit into high school and not really succeeding all that well – although that’s par for the course for a lot of high school narratives, isn’t it?

Will Byers and Eleven are the ones who are trying to fit into their new surroundings, respectively. It looks like Lucas is doing well enough though, he seems to be a basketball star at Hawkins High School and seems to be fitting in quite nicely. (At least at first glance.) We don’t really see Jonathan Byers but we assume he’s around somewhere, seeing as he was in some of the earlier promos. 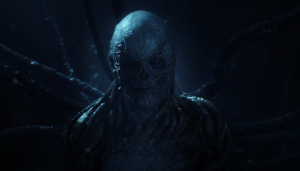 We see Steve and Nancy and they utter the phrase “See you on the other side” which alludes to the fact that they’re going to go into the upside down which is just terrifying if you think about it.

We also see Max Hargrove seemingly levitating over her brother Billy’s grave at one point which alludes to the fact that she may have powers… speaking of powers, Paul Reiser reprises his role to tell Eleven that she needs her powers back in order to fight whatever’s coming and without her the war is lost.

She ends up in the back of a stranger danger van with these guys and Mike looking after her like she just disappeared off the face of the planet. (Why do I have a feeling her face is going to wind up on a milk carton?)

We get to see Hopper again and things aren’t looking so good for our favorite Sheriff. He’s cut off from everyone but he says that he wants to do something if it’s the last thing he ever does and then we see these wackos put a gas mask on him and we just get chills because they already killed him once, come on people!

We get to see some terrifying demigorgon bat-like creatures that have obviously been created and are flying around and finally we get to see the main villain, a scary guy who has tentacles and who utters the phrase “You have lost.”