‘The Bachelor’ spoilers find that it may be quite sometime before we see our next leading man on the screen but the newest casting call has fans zeroing in on who they believe will helm the show.

In a first, this year saw back to back Bachelorettes take the reins. With Katie Thurston’s season now complete with an engagement and Michelle Young’s season starting up, eyes-and casting calls-are turning to the next Bachelor season.

No announcement has been made as to who will be the Season 26 Bachelor but theories range from Tyler Cameron, runner-up from Hannah Brown’s season, to Ivan Hall, last seen on Clare Crawley/Tayshia Adams’ season (but soon to re-appear on Bachelor in Paradise), to Justin Glaze, the man with more facial muscles than thought possible, who saw himself as a sidepiece to Katie and Blake Moynes.

However, two more of Katie’s exes have gotten the rumor mill going more than any of the above: Andrew Spencer and single dad, Michael Allio.

Many Andrew fans flocked to Twitter after his emotional elimination from Katie’s season to endorse an Andrew-led season (and to ask where they could sign up). Andrew’s cousin, another Bachelorette alum- Clay Harbor also recommended Andrew, tweeting:

Andrew S for Bachelor. That’s it. That’s the tweet. #TheBachelorette

To be fair, Clay also thinks Michael would be a great choice, writing:

So hear me out. We need two seasons of the bachelor in a row after this. One for Michael and one for Andrew. #TheBachelorette

And Clay is not alone. Michael was a fan favorite from the beginning and viewers were almost as devastated as Katie to say goodbye to the widower when he put his son’s needs first.

Looking at the latest casting call for women to sign up for the next season, it seems as though Bachelor producers are leaning the Michael A way, too. Though nothing has been expressly said, a new tagline was added to their post, with the show looking for “Eligible Bachelorettes, Divorcees and Single Mothers”…hmmmm 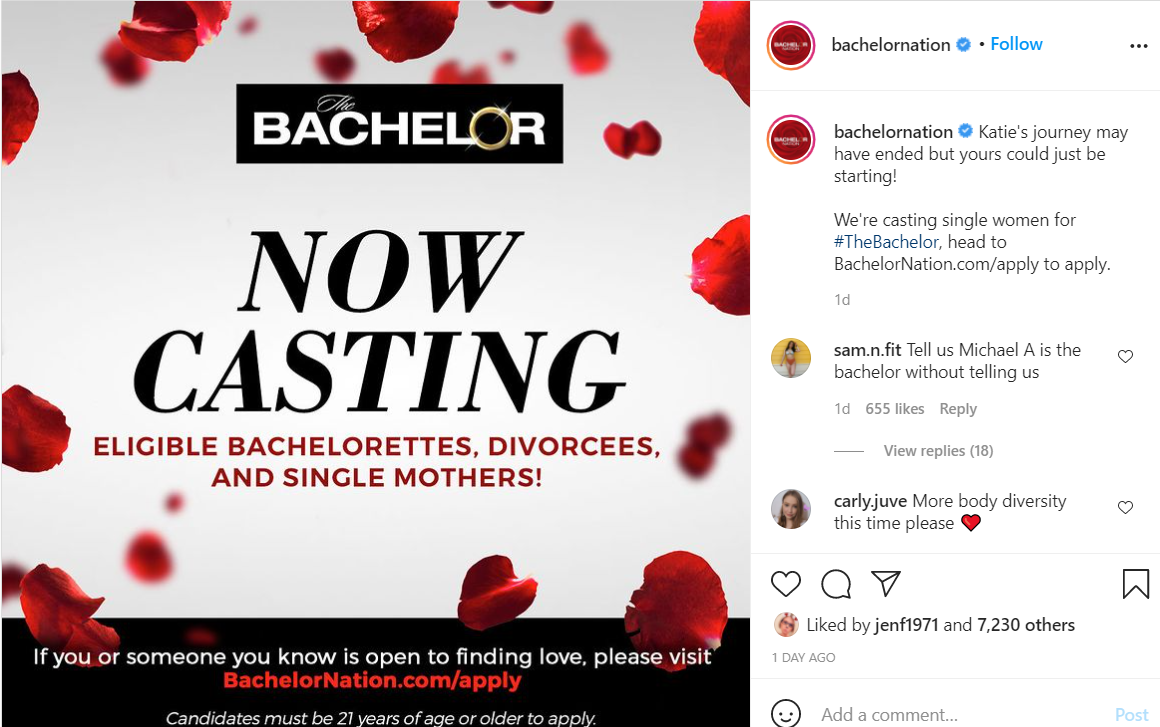 Again- this is no admission on producers behalf that Michael is our man, and we have a whole new season of Michelle’s men to fall in love with yet (not to mention those from Clare/Tayshia’s). Plus, if Michael is the lead, you can bet your bottom dollar that considerations for his son, James must be made…but if they really want Michael, they’ll get ‘er done.

Let us know your thoughts in the comments section below and watch this space for more info as we receive it!