It was a bittersweet anniversary as the couple have been separated for their entire year one-year of marriage and still have no idea when, or if, they will ever be able to live in the USA together.

It was only days after their January 27, 2020 wedding- which took place in Michael’s home country, Nigeria- that Angela had to fly back to Hazlehurst, Georgia to be by her ailing mother’s side.

Sadly, Angela’s mother, Glenda Standridge, passed away on February 8, but Angela did make it home in time to say her goodbyes.

It has been a tough year apart for the couple who didn’t even get a proper honeymoon. However, the spark seems to remain alive. On her Instastory, a slimmed-down Angela posted a throwback snap of the happy couple at their wedding reception along with a photo of the super sweet anniversary gift she had made for her husband. 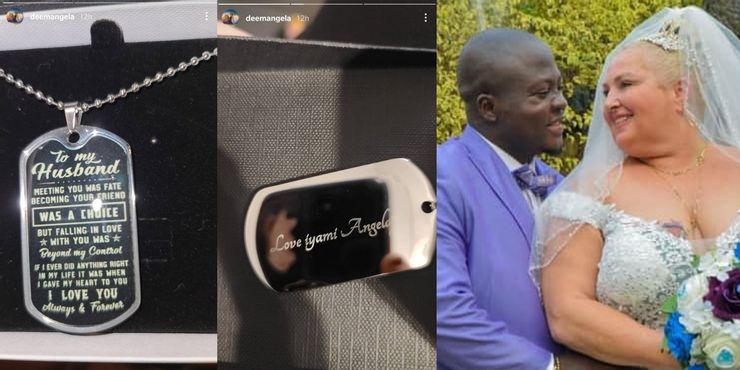 The dog tag necklace was engraved with a loving message-

“To my husband. Meeting you was fate, becoming your friend was a choice, but falling in love with you was beyond my control. If I ever did anything right in my life, it was when I gave my heart to you.” And incase Michael wasn’t sure yet of his wife’s feelings, the message finished with, “I love you, always and forever.” The other side of the necklace had “Love iyami Angela.” inscribed on it.

Though physically apart for who knows long Angela and Michael will come together remotely to appear in the 90 Day franchise spin off- Love Games on Discovery+. Similar to The Newly Wed game, Love Games pits 24 couples from the 90 Day universe against each other in a battle to prove which pair knows each other the best.

Each of the couples, including single-and-ready-with-a-d**pic-to-mingle Colt Johnson with his mother Debbie were filmed in their own homes due to Covid -19. The pandemic is a possible reason for the slowdown of Michael’s CR-1 visa, required to join Angela in Georgia.

I am sure the couple are keeping fingers crossed they’ll be together again soon but at least absence makes the heart grow fonder. From what we’ve all seen on the three season they’ve documented their rollercoaster of a relationship,  it looks like a little more fondness could go a long way!