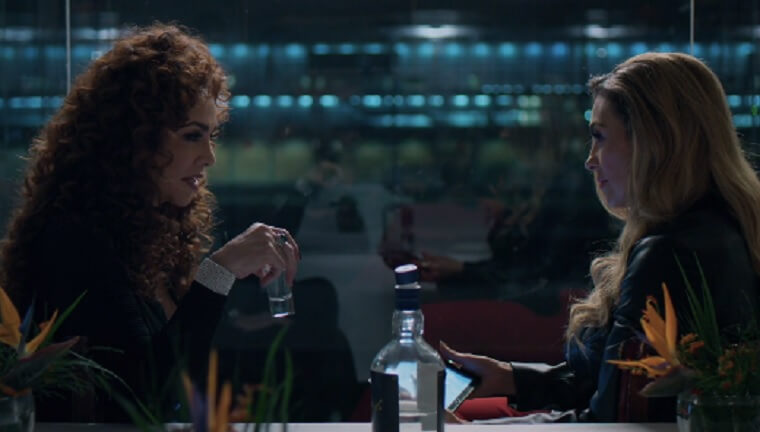 Telemundo La Doña spoilers for January 21st indicate a crossover and a new partnership. It’s not the first time, either. As we mentioned once, Aracely Arambula (Altagracia Sandoval) appeared in Season 6 of El Señor de Los Cielos (Lord of the Skies). Playing Altagracia there as well, she got involved with the Casillas family. It looks like this will play a huge part in this season of La Dona, so here’s what you need to know.

We’ve seen Altagracia make contact with Amado Casillas (Matías Novoa) of El Señor de Los Cielos. He’s been the main person who keeps her fortune growing. This is crucial for our Doña, as La Doña spoilers indicate several of her money sources are in jail now. Getting revenge against your enemies and finding your missing daughter doesn’t come cheap.

There’s another great aspect to this crossover angle. Her former right hand, Braulio Padilla (José María Galeano) is working with relatives of her former victims to bring her down. In one scene, he specifically told them in his twenty years of working with Altagracia, she’d never been involved in drug trafficking. His ignorance about her latest associations will come in handy later. For one, he won’t be able to go after them if he doesn’t know they exist. For another, we’ve seen enough Narco Novelas to know these people don’t play. If Braulio and the rest become too much of a problem, we don’t see them being a match for the Casillas. Especially after meeting one of the people Amado hooked Altagracia up with.

So, we mentioned a new alliance. In last night’s episode, we met Eunice “La Felina” Lara (Maricela González). She’s a character that originated on ESDLC. Believed to be dead, she was cured from her gunshot wound by a witch. Since then, she’s been secretly working on growing a fortune—as well as Altagracia’s. She’s the one Amado trusted with Altagracia’s funds, and Felina did a great job. La Doña spoilers reveal she tripled the investment. She’s going to be a big player here. First off, she’s got the money to pay off Altagracia’s debt to José Luis Navarrete (David Zepeda). Second, she seems more than happy to partner with Altagracia. Third? She’s ruthless. In Tuesday’s episode, we watched her shoot a guy straight in the head for messing with her bet. Then, she beat the you-know-what out of the employee he talked into betraying her. Only Altagracia’s appearance spared him more punishment. Felina even allowed him to leave the country and stay gone in exchange for his life. These two seems like a match made in Telenovela Hell for anyone who crosses them, and we’re so there for it.

For more royal and celeb baby news, come back to Celeb Baby Laundry. For any other soap opera and entertainment news, please visit Daily Soap Dish.

Telemundo La Doña Spoilers: Lucho wins a battle, but will the war be his?