ABC ‘General Hospital’ (GH) spoilers for Tuesday, January 14th indicate that Quartermaine war is about to begin. It seems Laura Webber (Genie Francis) might also be facing some hard truths, while Lulu Spencer (Emme Rylan) gets a surprise. We’ll also deal with the Shiloh (Coby Ryan McLaughlin) service, which is promising to be a major surprise. Let’s look at what the teasers and preview tell us. 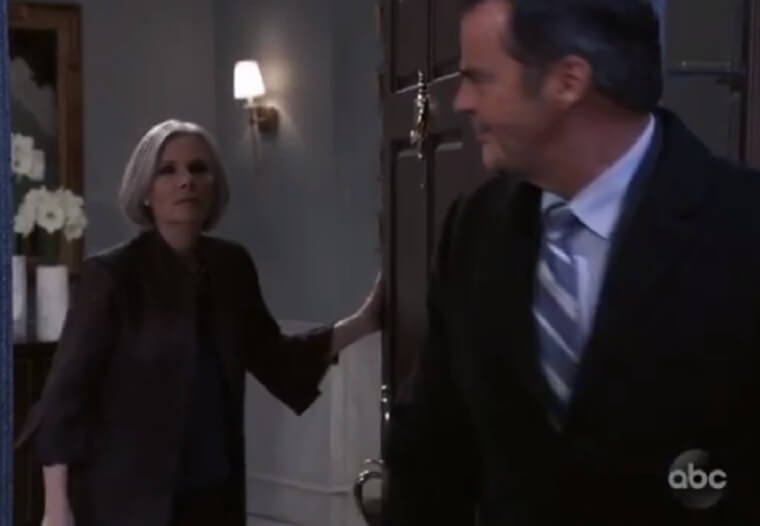 We know that things are tense in the Quartermaine home. On Monday, Tracy Quartermaine (Jane Elliot) took a lot of interest in ELQ business, something that got Ned Quartermaine (Wally Kurth) thinking. She insinuated somebody (not her) was looking to take control of the company. Tuesday, we’ll see this story continue as Tracy reminds Ned of what’s important. Expect her to make a lot of noise during this meeting when it happens.

In related news, she’s apparently not happy about Brook Lynn’s (Amanda Setton) recent behavior, as she will advise Ned there’s a lesson here his daughter would do well to learn—most likely it’ll be about knowing one’s priorities. She already made it clear Brook Lynn should worry more about ELQ and less about her go-nowhere music career. Tracy doesn’t even know the half of it.

In related news, Brook Lynn’s surely-failed gig will have another consequence. We already know and Dustin Phillips (Mark Lawson) have a history. Lulu will ask a lot of questions on January 14th about this past of theirs. Meanwhile, Harrison Chase (Michael Swickard) has to break up the fight that started Monday when sleazy producer grabbed Brook Lynn.

In other ‘General Hospital’ spoilers, Laura tells Jordan Ashford (Brianna Nicole Henry) she would love “him” no matter what “he’d” done. We assume this relates to Nikolas Cassadine (Marcus Coloma) and his questionable actions in pursuit of the Cassadine estate. Surely, there’s already an open investigation.  Poor Laura already knows most of Nikolas’ sins, but is the Cassandra Pierce (Jessica Tuck) escape about to be revealed, too? Tune in to find out..

Also on Tuesday, we’ll likely learn who actually arranged that Shiloh service. Willow Tait (Katelyn MacMullen) will ask someone if they arranged the service, but we’re sure it won’t be the dark-haired woman in the clip. As Nelle Benson (Chloe Lanier) makes a shocking confession Tuesday, we bet it’s all her doing. It’d make sense. She was likely married to Shiloh.