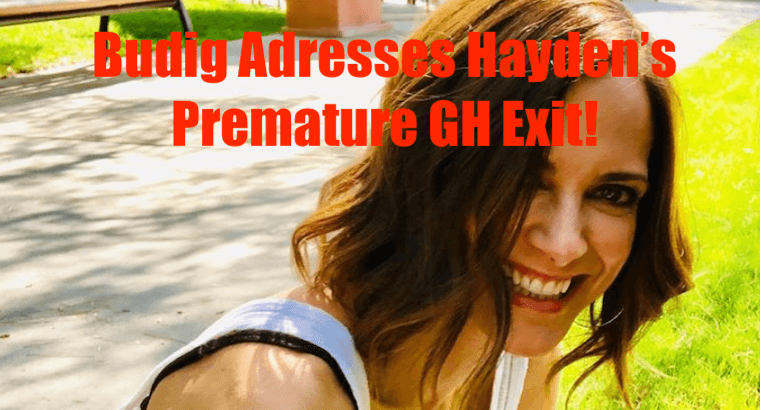 ‘General Hospital’ (GH) spoilers finds that if any of you got the chance to watch yesterday’s Thanksgiving episode of ‘General Hospital’, then you’ll know that Hayden Barnes (Rebecca Budig) has sung her swan song and exited Port Charles, effectively leaving little Violet Finn (Jophielle Love) to live with her Daddy, Dr. Hamilton Finn (Michael Easton) for the duration. With how adorable little Violet is, it was hard not to get choked up over those scenes, she doesn’t know that this is the last time that she will see her Mommy and it just breaks my heart.

I’m not alone, Budig herself posted on instagram saying this: “It’s hard to say goodbye once..and twice is that much harder. Then add the beautiful, sweet, magical @jophiellelove and it’s heartbreaking.” and just to add to the tears, little Jophielle Love herself posted on insta, “I will be waiting Mommy. I know you’re coming back for me… Let it be soon, please.. It’s not fun without you! I love you!” I don’t know about you guys, but I’m verklempt! Talk amongst yourselves!

Of her co-star, Michael Easton (Dr. Hamilton Finn), Budig writes, “Sigh. I’m so lucky to call him my friend. To have worked with him..and learned so much from him. You are only as good as your partner so..thank you to all the fans who have supported me, Hayden and Finn…And I always say..never say never.”

Hayden and Finn had great chemistry together and it looked like they were all set to do this co-parenting thing right, but I guess the stars just didn’t align for them. After all, by the time they found each other again, Finn was engaged to Anna and Hayden… seems to be halfway involved with Nikolas Cassadine (Marcus Coloma)? Apparently there was an instance a long time ago where she and Nik had an affair while she was still married to Jake Doe (Billy Miller) and it looks like there are hints of that still swirling around? He seemed pretty eager to get her out of the way… for what reason wasn’t really revealed, but probably will be in the upcoming weeks.

Personally, I’m disappointed by this development because I was looking forward to seeing how Finn and Hayden handled the whole co-parenting thing and watching her upcoming interaction with Anna Devane (Finola Hughes). It would have been interesting to see how these two regarded each other, one former and one current flame of Dr. Finn Hamilton. Unfortunately, story line dictated that it was time for Hayden to leave. Anna seems eager to welcome Finn’s child though, so that’s good and a totally mature move on her part as well. Then again, being a Mom before she knows that it’s bad form to take whatever bad blood you have with adults out on children. I think Anna will be a good influence on little Violet in Hayden’s absence.

What will Hayden be doing during that time? Probably trying to get settled in another place under another name. Unless something absolutely dastardly happens to her though, I suspect that she may come back for her little girl. Or at least send someone back for her little girl. Like Budig said “Never say never”, so to see how this story develops we’ll all just have to stay tuned!!!