Mónica turned out to be doing a good thing by following Daniel. He’d been taken hostage by a couple of the port workers and is close to getting taken out. When Daniel’s captor goes to check on who has arrived, Mónica manages to get the jump on him. She steals his gun and forces him to bring her to Daniel.

Seeing he’s okay, Mónica demands that Daniel’s captor releases him. As the man is doing so, however, he tries to pull a fast one, and this leads to a struggle that Daniel and Mónica win.

Later, when the captor’s accomplice arrives, he tries to hold Daniel and Mónica at bay by threatening the captor. Wow. Real smart there, buddy. Somehow, we don’t think they’re too concerned.

Eventually, Daniel and Mónica get the upper hand and interrogate the accomplice, who they’re sure must know where Natlia is. He swears that all he knows is, that a girl was smuggled to Mexico. He doesn’t know who was behind it, as people doing these things don’t tend to hand out names.

In a surprising move, the captor allows them to leave and even shoots his acomplice. He says he’ll claim self-defense.

Now that she knows where Natalia is, Mónica is focused on getting to Mexico right away. She’s packing when Laura shows up. She wants to apologize for what happened earlier. Laura promises that she didn’t know he and Mónica were involved. Mónica accepts her apology and tells her she’s heading to Mexico to look for her daughter.

Laura’s had a rough time. Let’s count the ways. She had to arrest her man’s daughter. She finds out the other woman she knew existed is someone she actually knows. Then she got an envelope filled with news clippings of Alex’s supposed former crimes. But that’s not all! It seems the Telenovela Gods have yet another blow coming her way…

She and Velasco (Jorge Bosch) are talking shop when Alex returns to confess he is the one who killed Beatriz Prats (Natalia Varela). Laura is shocked, and immediately thinks he must be trying to protect Eli. Her partner isn’t as convinced. 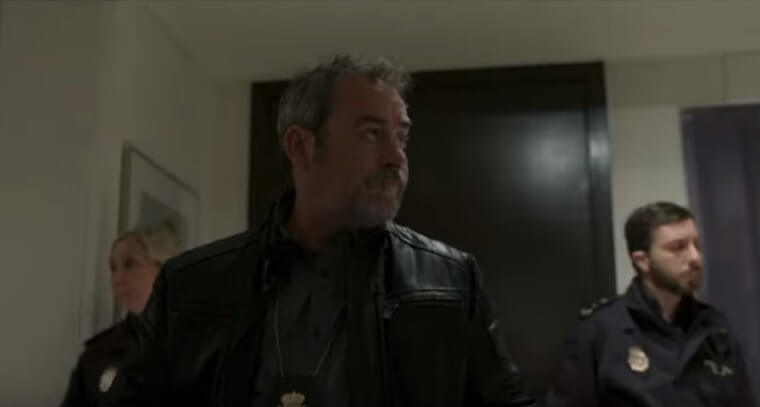 After a search of Alex’s place, he tells her that he needs to handle this situation himself. He’s forceful, which gets on Laura’s professional nerves. She reminds him she is his boss and he shouldn’t be giving her orders. He begs to differ. He found her half-smoked cigarette in Alex’s apartment.

Now that Alex has confessed, they have no choice but to let Eli go,  despite Laura’s suspicions. Eli is grateful to be released, but upset about her father.

She later calls Humberto to tell him what happened. She tells him to turn on the news, and they both watch the report as they talk. He can’t believe what he’s seeing.

No te Puedes Esconder spoilers: Free at last—sort of

Now that Hugo (Adrian Ladron) managed to get the upperhand on his cohorts, they escape in the car. He’s still holding her at gunpoint, though, and she wonders why he bothered to help her get free if he’s just going to do the same. He explains that he needs to ensure she won’t follow up on calling the cops. He’s going to be locked up if she does, and possibly killed in prison. She reluctantly obeys.

As he is wounded, he needs her help. First, a place to hide out, and then help getting the bullet out of him. As they are currently in Mexico, she convinces him to let her drive and takes him to her old home.

Inside, she reluctantly tends to the bullet wound, and it is so obvious that she doesn’t really take after mom in this department. But she hangs in there and keeps him focused and talking as she works.

Once that’s all done and he’s fallen asleep, Natalia makes a huge mistake. She’s desperate to talk to her mother, so she takes his phone but she doesn’t get through.

A post shared by Telemundo Series Exclusivas (@telemundoseriesexclusivas) on Oct 10, 2019 at 2:02pm PDT

Unfortunately, she didn’t know there’s a tracking thing on his phone. When Hugo wakes and realizes what she’s done, he’s angry. She swears she didn’t call the cops, but he’s more worried about the tracker. He hands her some money, and tells her to buy a phone to call a friend of his to pick him up. As he hands her the number, he orders her to get out immediately.

To her credit, she complies, but it’s too late. Diego (Giuseppe Gamba) and others are already there and surround her outside.

‘Days of Our Lives’ Spoilers Friday, October 11: Why Did Dr. Rolf Inject Hope On DOOL? Here’s What You Need To Know!