No te Puedes Esconder spoilers for Tuesday, October 1st indicate the investigation into Alberto Torres (Peter Vives) is heating up, Mónica Saldaña (Blanco Soto) is worried about Natalia Saldaña (Samantha Siqueiros), and there’s a twist to the fight between Natalia and Eli (Patricia Guirado). If you missed it, let’s get to the No te Puedes Esconder recap.

We go back today to see our hired assassin, Daniel (Eduardo Noriega), getting his assignment. He looks pathetic and down on his luck.  It’s also his first job, it seems. The guy who hires him tells him this gets easier. He also doesn’t need to worry about what the target did. He’ll get part of the money now, part when the job is done, and part when it’s verified he is far away and quiet. 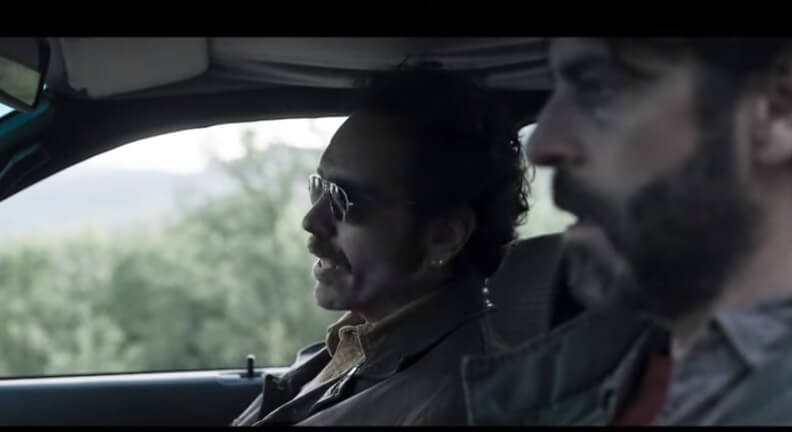 Later, we see him break into Mónica’s place. He watches her sleep on her couch as he aims a gun at her. The scene cuts to later on with him meeting the boss again. He claims the job is done, but it’s obviously not. Otherwise, this is one short show. We’re assuming his already obvious hesitation in this was made worse by the fact that she actually saved his life.

Natalia’s kidnappers are a couple of special cases who both luck out and get you-know-what. On the lucky side, they are this close to getting busted at the roadblock from last time when a commotion from another car being checked causes the cops to wave them on before the back of the van can be checked.

On the unlucky side, the door wasn’t actually closed before they took off. Natalia wakes and notices this. She manages to get the binds around her hands and feet off with the help of different things in the van and her lighter. Seriously? These guys are a total #fail. Isn’t rule #1 making sure that the person has nothing to escape with? Natalia, now free, jumps from the van and runs for help.

In even more bad luck for them (and her), she flags down a motorist who agrees to take her home so they can call the police. It turns out, he is connected with the kidnapping.

If fact, he seems pretty high up in it. When they arrive at the location Natalia will be held in, our ringleader reads his incompetent help the riot act for allowing her to escape. Not only that, they harmed her, which was not supposed to happen. He has someone else take Natalia to get cleaned up, then kills the incompetent help.

Meanwhile, Mónica is a mess. She knows something has to be wrong when Natalia didn’t come home without calling her first. She’s even more sure of that after Natalia’s kidnappers have her make a call to make it seem like Natalia left on her own. But Natalia uses a phrase she never uses during the call, and that makes Mónica decide to involve the cops.

She’s gotten no help from Natalia’s friends, Humberto (Juan Caballero) and Eli. He has no idea where she is, or that she didn’t go home. Eli claims not to know anything either, but won’t talk about the fight Humberto says she had with Natalia. More on that in a sec.

No te Puedes Esconder spoilers: Who allowed that?

Also today, Laura Urrutia (Maribel Verdú) is getting ready to interview Torres about the disappearance of his wife. She’s warned by her boss to tread carefully, as Torres has a good chance of being Mayor. Even President. That’s an enemy he doesn’t want. Laura agrees to interview Torres at his office and to use her manners.

Later, she questions him about whether or not his wife was into hiking and different things like that. When she asks about potential abuse, Torres is offended. He cites his record of always standing against such things, but Laura is undeterred. She tells him that she’s got authorization to check his incoming and outgoing calls.

A post shared by Telemundo Series Exclusivas (@telemundoseriesexclusivas) on Oct 1, 2019 at 6:57pm PDT

When she leaves, Torres is livid and wants to know who authorized her to do that. His companion points out that if they learn he called the magistrate overseeing things, it’ll be over. He might just have another concern on top of that.

After the talk with Monica, Eli goes to another room and calls Natalia. She begs her to come back, as they’re planning to get the cops involved. If that happens, someone’s career will be over. She promises not to see him if that’s what Natalia wants. Looks like we know what their fight was about now.