You might remember that Laura Urrutia (Maribel Verdú) had dropped by Eli’s home with her partner, Velasco (Jorge Bosch). They’d heard some incriminating stuff on the tapes they made in Alberto Torres’ (Peter Vives) office. The conversations had mentioned emails Eli wrote, but never sent to Beatriz Prats (Natalia Varela).

A post shared by Telemundo Series Exclusivas (@telemundoseriesexclusivas) on Oct 9, 2019 at 6:28am PDT

After checking her computer, they found a bunch of email drafts talking about how Beatriz didn’t appreciate Alberto, and even saying she wished Beatriz dead.

At the station, Laura is reading these emails out loud and asking questions. Eli admits that she did write these things, but that she never acted on her thoughts. Laura believes that these are very damning evidence and keeps Eli in custody.

When she returns to her office, Laura finds an envelope filled with old articles about a murder that had taken place years ago that Alex was accused of. She is horrified and confronts Alex. She said he’d been lying to her about having nothing to do with that death. He thinks that someone is trying to screw him over.

As the Telenovela Gods would have it, Mónica has been trying to get in touch with him. When she can’t, she stops by and catches him with Laura. Laura is angry about this, and demands to know why he didn’t tell her who his girlfriend was.

The way Laura sees it, he’s got two problems right now. He has to prove himself trustworthy, and his daughter innocent of Beatriz’s murder. He is shocked to learn Eli was brought in for that, and wants to know why he wasn’t told sooner. Laura claims that she’d wanted to come tell him to his face about his daughter, but found the envelope first. 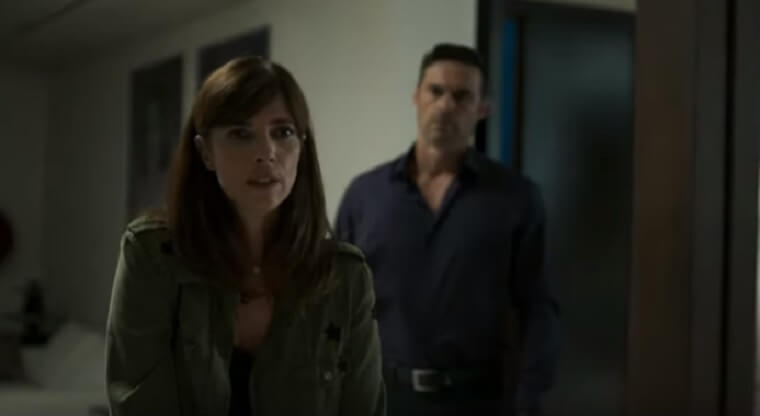 No te Puedes Esconder spoilers: Daddy to the rescue

Alex races to the police station, where he is allowed to speak with Eli. She is distraught, and swears that she didn’t actually hurt Beatriz. He promises he’s going to help her, then leaves to confront Laura. He thinks she’s holding her anger about him against his daughter. She says this is about the evidence she has, and she confronts him about the murder he was never proven innocent of. He has already been tried, but he got off because of an error in collecting evidence. As he can’t be tried again, she wants him to tell her the truth—did he do it? Alex claims innocence, but thinks that Laura likes the fact she’s a bit scared of him now.

To help Eli, Alex visits Alberto. He accuses the man of taking advantage of a naïve 19-year-old, but Alberto reminds him that the only reason she was a volunteer on his campaign was because of him. Alex thinks that Alberto is trying to pass the blame.

This is where things get even more insane. Alex admits to being Beatriz’s shoulder to cry on when Alberto was running around with other women. He says that she was really good in bed, which makes Alberto mad. He also tells Alberto that he knows perfectly well who killed Beatriz.

Alex leaves and heads back to the station, where he approaches Laura and Velasco. They’ve been going over some case info on a board, but they stop when he comes in the room. As if this couldn’t get any more insane, he confesses to them both that he is the one who killed Beatriz.

Let’s go back to the danger Mónica was in last time. She and Daniel had decided to check the area where Natalia’s found was found and were confronted by an assassin.

A fight ensues, and Daniel ends up shooting the would-be assassin with his own gun. Monica is shocked. When Daniel gets up, she holds him at bay with a crowbar, demanding that he stay away from her. Then she does something unbelievably dumb. She seriously drops her weapon before running away from him.

Mónica, shaken, heads to the police station with the intent of reporting Daniel. Before Monica can say anything, Ana (Bárbara Goenaga) jumps in with an update. There’s no new news about Natalia, except for the port she was likely taken to. Before they can do anything about that, though, a judge has to sign off. Monica can’t with the idea that her daughter’s safety is being risked by bureaucracy.

Elsewhere, Velasco and Daniel talk about the Russian and whether there are any leads. He thinks he can help. He begs Velasco to give him anything, and once he’s found something, they can take over. Velasco admits that she was smuggled out of a port, and they’re waiting for a judge to sign off so they can act on the information.

Later on, Daniel visits Mónica and begs her to listen to him. He wants to help. Mónica ends up opening the door, and Daniel tells her what he is planning to do. She wants to come with.

It’s a long trip, and Mónica falls asleep at one point on the way there. When she wakes, Daniel wants her to locate a hotel for them, but Mónica would prefer to go straight to the port. He tells her that it’s too dangerous to do this, because it will be later. Better they go during the day, when it will be busy and they can blend in. She does manage, apparently, to talk him into going, where they are stopped by a couple of guards. They are turned away, and apologize.

This turns out to have been a bad move. Later, Mónica is following Daniel as he chats up a port employee at a bar. He has merch he wants to move and wonders if this man can help. He can’t, but he tells Daniel he can introduce him to people who can.

Back at the port, Mónica watches as Daniel and the man approach someone else. He’s one of the men who turned them away earlier. Apparently, the guy had noticed something off about him and this whole thing was a setup. Daniel is taken by gunpoint.

After the incident last time, Hugo has decided he wants out. He brings Natalia a weapon and tells her to keep it hidden. He says he’ll let her know when it’s time to use it. She’s a bit hesitant, but he asks if she wants to leave, or not. This seems to get her thinking and she agrees.

As they’re preparing to load Natalia into yet another vehicle, the plan is set in motion. Natalia stabs Diego (Giuseppe Gamba), and Hugo makes a big show of wondering where she got the weapon. As Diego is being tended to, we learn the knife was actually his. Their boss isn’t impressed that a small girl was able to take him like that.

Hugo volunteers to drive later, and will be accompanied by two men. Before the trip, he sneaks into the garage and sabotages the car, then calls his dad and demands they all run now.

The next day, the car breaks down as they’re bringing Natalia to her next destination. Hugo offers to check it out, then calls out for another of his companions to help. The third will stay in the car watching Natalia.

As his companion is checking over the vehicle, Hugo attacks and kills him, leading the other guy to get out of the car. Hugo them kills him, too, and grabs the keys to the handcuffs. He and Natalia then escape.